It Came From the Back Room #33 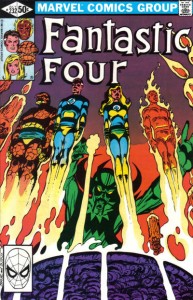 Standard recap: I’m slowly going through AABC’s one-million-plus back-issue room, restocking the boxes on the sales floor and pulling stuff to sell as discount/overstock/special items. I’m going through the alphabet backwards (don’t ask), and at my speed (especially with the school semester in full gear), this amounts to a two-year project.  This week, the focus continues to be on the letter “F,” and on discount comics featuring a series that Marvel has frequently billed as “The World’s Greatest Comic Magazine” — the Fantastic Four.

The FF was Marvel’s first Silver Age superhero book, of

course, and for quite a while was their flagship title.  Spider-Man took over that slot in the late ’60s, and the X-Men took it in the late ’70s, but there’s no denying that the Stan Lee/Jack Kirby team from, oh, FF #39-40 (Daredevil guest-starring against Doctor Doom, as a blind FF “Battle for the Baxter Building”) through #65-66 (the origin of Him/Warlock) offer one of the great runs in comic history, a burst of creativity that births the Inhumans, the Silver Surfer, Galactus, the Negative Zone and the Black Panther… and that’s just during nine issues in the middle of the run.

Unfortunately, none of those comics are being offered on 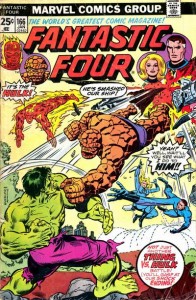 the discount racks, so let’s pass over that part of the FF’s oevre, and concentrate on their somewhat-later years, after Kirby has left with issue #102 (replaced by John Buscema) and Lee leaves for good with issue #125. Roy Thomas takes over through issue #133, and then Gerry Conway settles in for almost two years, through #152; Buscema leaves around issue #141, and Rich Buckler takes his place for most of the rest of Conway’s tenure. Thomas comes back as scripter with issue #156, with (mostly) Buckler on art through #164, when a young George Perez takes over from there through #172, is replaced by Buscema for three issues, and then comes back from #176-178; these Thomas/Perez/Buscema 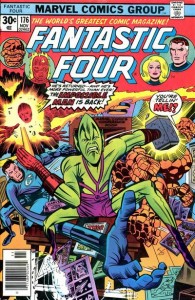 efforts are decent romps involving the Impossible Man, Counter-Earth (and its own version of Reed Richards), Galactus, and a Thing who’s been turned into Ben Grimm, gets replaced in the FF by Luke Cage, and then ends up in a Thing exoskeleton for a while before inevitably turning back into his rocky self. After #179, it’s musical-chairs creators for awhile, with Perez art in 184-188 and 192-193. Finally, with issue #195, Marv Wolfman as scripter and Keith Pollard as artist settle in for an 11-issue term; with issue #209, Pollard is replaced by another new artist, but one who’ll end up having deep ties to the FF: John Byrne.

Byrne might not be the most obvious choice as a Jack Kirby acolyte; his sleek, controlled style seems far from the King’s energy-bursting primitivism. Underneath, though, Kirby’s nowhere near as primitive as he might seem at first, with a surprisingly fine line that helps to contain all that power. The more you look, the more it’s clear that Kirby is one of Byrne’s major influences; he and Byrne share a penchant for both the small, telling human moments and the big cosmic reveal, and they always know precisely where to place a line for the greatest effect. In FF #209-214, Wolfman gives his new artist a lot to play with: a galaxy-spanning epic involving a rapidly-aging FF (thanks to a Skrull ray) involved with 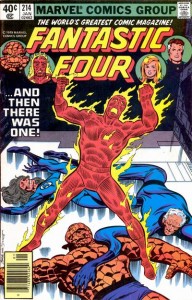 Galactus, Terrax, the Sphinx and various cosmic remnants from Wolfman’s recently-cancelled Nova series. The conclusion, with a determined Human Torch in over his head and fighting to figure out a way to save his teammates, is a fondly-remembered and note-perfect finish. The Wolfman/Byrne team stays on for another three issues, plus a Bill Mantlo/Byrne collaboration in #218 and a Byrne solo two-parter (originally done as a soft-drink promo comic, but shelved after the deal was cancelled) in #220 and 221. Issues #219 and 222-231 are an interesting but failed experiment: Doug Moench and Bill Sienkiewicz, fresh off an acclaimed run on Moon Knight, try their hand at the FF but mostly fall flat,

their moody style not a good fit for the FF’s bright and shiny world.

That sets the stage for a new era, though: FF #232, the first with Byrne as both writer and artist. He’ll go on to stay through issue #293, a 61-issue run that’s the second-best in FF history. This first effort is a good example: in 22 pages, Byrne introduces all of the team, establishes their powers, characters and relationships, pits them against interesting adversaries (courtesy of a familiar but not overused bad guy), and shows how their teamwork and sense of family let them win the day. It’s a compressed tour de force that, today, would cover six issues (Yeah, Justice League #1, I’m looking at you), and it’s just the start: subsequent 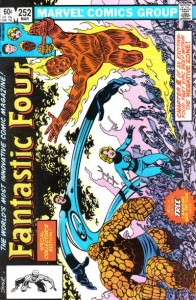 issues prove just as skillful. Issue #236, a 20th-anniversary tribute, is a high point: a 40-issue story that hits every high point a reader could ask for — two major villains, an origin recap, a what-if-it-had-never-happened scenario, a clever trap, and numerous character beats, especially with Reed and Ben — and does it with grace and pizzazz. It’s one of the very few non-Lee/Kirby issues that can stand with them, unashamed.

The rest of the run never quite hits that sustained high again, but there are frequent great moments: a battle with Galactus that drags in many of the New York-based heroes; a fight with Gladiator wherein Byrne gets to try

out a few Superman theories that he’ll use on his move to DC years later; a long trip to the Negative Zone (including the all-sideways #252) that lets Byrne show off his love for Star Trek; the machinations of Dr. Doom and his ward, Kristoff;  Reed’s galactic trial for saving Galactus’s life; Sue’s pregnancy (and her, and later the Thing’s, replacement by She-Hulk); She-Hulk’s unauthorized centerfold; the frequent focus on just how powerful Sue is, culminating in her transformation into the badass Malice… it’s a five-year, high-quality cavalcade of comics storytelling that any fan should have in their collection. 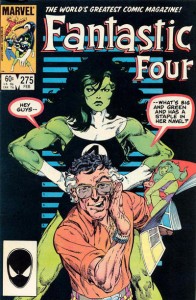 And, for you? A buck each, on the discount racks at the west end of the store. Trust us: these are some of the best deals we’ve ever offered, in terms of sheer entertainment for the dollar. If you don’t already own the books, here’s your chance: just in time for Hallowe’en, you’re in for a treat.

With 40 years of experience in comic reading, collecting and reviewing, English Professor Phil Mateer has an encyclopedic mind for comics. Feel free to ask Phil about storylines, characters, artists or for that matter, any comic book trivia. He will post your questions and answers on the AABC blog. His knowledge is unparalleled! He is also our warehouse manager, so if you are looking for that hard to find comic book, ask Phil!
View all posts by Phil →
This entry was posted in Comics History, Marvel, News & Promos, Reviews and tagged Fantastic Four, Jack Kirby, John Byrne, Stan Lee. Bookmark the permalink.