Just as entertaining, wide-ranging and well-produced as the first issue, with a combination of the one-page gags that Mad readers are so familiar with, plus a trio of longer (five and seven pages) stories, including a fascinating autobiographical piece about the first time the schoolchild Sergio ever got paid for his drawing; like the other longer works, it’s colored by Groo‘s Tom Luth, and looks wonderful. Throw in a couple of puzzle pages, and this continues to be one of the best comics on the stands.

These three are all linked because they’re all published by DC’s Vertigo imprint, a section of the company that’s been eclipsed with all the “new 52” talk; with cutbacks in its editorial staff, and many of its characters now showing up in the “real” DC Universe, the future of the line is cloudy. That’s too bad, since there’ve been a ton of excellent comics 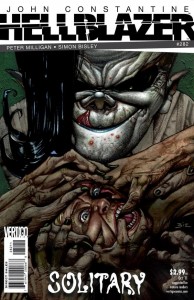 produced here over the last 20 years: books that mainstream DC would never have considered. DMZ is a good example: it’s entering its final arc (Vertigo titles like Preacher and Transmetropolitan were among the first American titles to use the manga model of publishing series with a distinct beginning, middle and end, and to make money from the trade collections, and this one’s doing that too), and its tale of a near-future NYC that’s seceded from the US, and been under fire from the military, has been smart and compelling. As with a lot of Vertigo titles, it’s character-driven; Matty, the young journalist who provided the main viewpoint, is now reporting on the cease-fire and uneasy peace, and there’s a lot of quiet psychological musings and 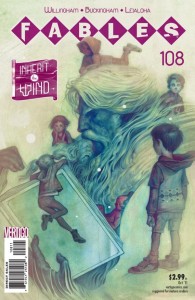 reviews of events over the previous issues. Two more and this wraps up, so if you liked earlier issues and drifted away, this is a good time to come back and watch the final developments and curtain calls. Hellblazer doesn’t have an ending; it was a regular DC title before Vertigo, and will probably be there if it ever closes up shop. Like many mainstream ongoing comics, then, it depends on its creative team for its good and bad phases. Currently, it’s in a good one: Milligan brings the British-Isles sensibility that John Constantine requires, and Simon Bisley is the perfect artist for its gritty occult stories. This one’s a done-in-one jailhouse horror tale, and a good issue for curious readers to experience the pleasures that this version of the comic offers. Finally, there’s Fables: the best and most visible of the current Vertigo line; if you’ve never read this book about modern-day 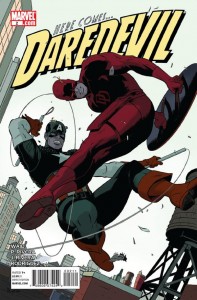 incarnations of the old folk tales and legends, you’ve been missing something special. The Willingham/Buckingham/Leialoha triad is the original storytelling team, too, so this offers a typical example of the pleasures of the series. It’s got the middle episodes of a couple of different subplots, though, so any interested readers should go check out the many trades reprinting earlier issues: there’s a rich, well-told and very full history there.

Two second issues, but don’t be fooled: both are of characters who’ve appeared in hundreds of their own comics before these. Both have been effective relaunches quality-wise, though. Daredevil has succeeded by switching up the tone: the grim Matt Murdock that culminated in the painful-to-read Shadowland thing is gone, back to his Stan Lee-created devil-may-care persona, and Waid makes him a pleasure to read, especially when combined with the art of the Rivera siblings: very clean and easy to read in the regular sequences, with imaginative graphics supplying a cool 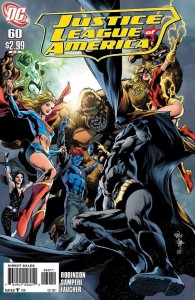 picture of DD’s radar sense when that’s required. Captain America offers another return to basics in the character — it’s the Steve Rogers Cap again, Bucky being (at least temporarily) dead and all — but with Brubaker still handling the writing chores, it’s got the same sensibility as before. That’s a good thing, though, since he’s proven so adept at chronicling Cap adventures for the last six or seven years now; add in a solid, fun-to-read artist like McNiven, and this continues to be one of the better-produced Marvel books. 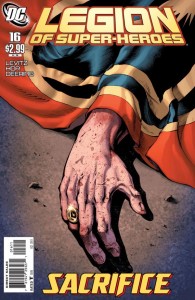 Two more DC titles with their final issue before the reboots; Levitz’s LSH ends its current storyline with a team win and a character death(the cover’s a callback to LSH Vol. 2 #4, which had a similar demise), but otherwise it’ll be back with the same creative team in a few weeks, so no big deal. JLA is more interesting, because it’s more metatextual: Robinson uses the occasion to cram in quick summaries of the three or four main arcs he had planned for the coming year (now all moot, of course, since he, the artists, and all the current JLA characters have been jettisoned in favor of the Geoff Johns/Jim Lee/big-deal reboot in two weeks), and signs off with the team disbanding and saying goodbye to one another — and the readers. It’s an oddly affecting farewell, and worth a look. 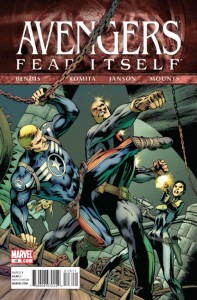 These four titles are linked because they’re all top-drawer 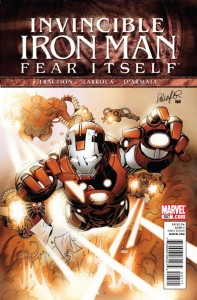 superhero books that have currently been sucked into the seemingly-interminable Fear Itself overarc, but all of them offer more than just a nominal tie-in. Avengers sees Bendis using only a little of that characters-talking-to-the-camera-in-retrospect bit, but most of the issue is actual action, as Cap and some Shield agents track down a lead involving the Red Skull and run into Master Man and assorted other Nazis; the Romita, Jr./Janson art is reason enough to buy the comic. Iron Man has Pepper, in her own metal suit, battling the transformed Grey Gargoyle along with Detroit Steel in Paris, plus Tony, in Asgard, doing stuff that supplements what we’ve seen him doing in Fear Itself; since writer 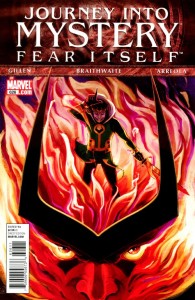 Fraction is scribing both titles, this feel like a more essential part of the overall story than most tie-in issues do. Journey Into Mystery focuses on the (very) young Loki, who, in Gillen and Braithwait’s capable hands, has been a surprisingly appealing and fascinating character; it’s probably the best of the four books. Gillen’s also writing Uncanny X-Men; it, too, offers a major turning point for one of the characters (let’s just say that fans of the Peter/Kitty relationship, having seen Gillen bring Pryde back to normal just an issue or two ago, will find it frustrating), as the team has to take desperate measures to fight a seemingly-unstoppable Juggernaut. Like the other three comics, it offers top talents writing effective superhero action and soap opera: just the combination of entertainment and stylish storytelling that should keep fans coming back for more.

With 40 years of experience in comic reading, collecting and reviewing, English Professor Phil Mateer has an encyclopedic mind for comics. Feel free to ask Phil about storylines, characters, artists or for that matter, any comic book trivia. He will post your questions and answers on the AABC blog. His knowledge is unparalleled! He is also our warehouse manager, so if you are looking for that hard to find comic book, ask Phil!
View all posts by Phil →
This entry was posted in New Comics, Reviews and tagged Avengers, Captain America, Daredevil, DMZ, Fables, Hellblazer, Iron Man, JLA, Justice League, Legion of Super-Heroes, Loki, Sergio Aragones, Simon Bisley, X-men. Bookmark the permalink.