It Came From the Back Room #29

Standard recap: I’m slowly going through AABC’s one-million-plus back-issue room, restocking the boxes on the sales floor and pulling stuff to sell as discount/overstock/special items. I’m going through the alphabet backwards (don’t ask), and at my speed, this amounts to a two-year project. This week, we’re nearing the end of the letter “G,” and that means one of Marvel’s weirder creations:

This was part of the early-’70s horror boom, which saw vampires, zombies, werewolves and other creatures of the night all suddenly popular, and all jostling for comics-rack space (not to mention magazine-rack exposure, as Marvel’s black-and-white horror line 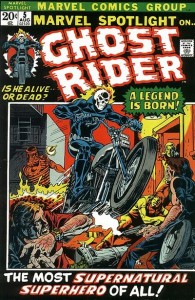 competed with the Warren horror titles like Creepy, Vampirella, etc.). The cliche is that horror gets popular during times of economic or political uncertainty: Frankenstein, Dracula and Wolfman movies in the ’30s, EC and other comics in the early ’50s, and the similar success of Twilight, Walking Dead, etc. today all fit the pattern too. That may or may not be true (you can just as easily argue that it’s just a rough 20-year cycle, since the early ’90s also saw a smaller spike in such titles), but the recurring fascination with the supernatural is definitely there, and it sold a bunch of comics 40 years ago.

Ghost Rider is interesting because it was one of the few new ideas, not just another old standby like vampires or zombies or werewolves, and benefited from a great visual: a ghostly, skeletal motorcycle

rider with a flaming skull, roaring through the midnight streets and doling out vengeance to bad guys.  The character first appeared in Marvel Spotlight #5 (August, 1972), written by Gary Friedrich with help from Roy Thomas, as small-time circus stunt rider Johnny Blaze, distraught over the impending death of his father, makes the spectacularly poor decision of trying to save him via a deal with… could it be… Satan? Yeah, those always work out well, and this one’s no exception: the old man still dies, and Blaze, saved from being dragged to hell by the love of his pure-in-heart girlfriend Roxanne, is nevertheless cursed to transform into a flaming skeleton whenever the sun goes down. The first four issues of GR’s Spotlight run were helped considerably by the art of Marvel horror mainstay Mike Ploog, whose carefully-detailed style and sense of caricature made the various circus roustabouts and hangers-on fun to watch, and whose

solid design skills made the cool image of the main character’s flames, skull, leathers and bike a mainstay for tattoo artists, van painters, and other purveyors of redneck kitsch, even today. Tom Sutton took over the art chores in the final three issues of the Spotlight era, and if he was a degree of magnitude less than the stellar Ploog, he still had the horror chops and shadowy sense of menace that the series required.

After seven issues in Spotlight, sales warranted a solo title, and Ghost Rider #1 appeared in the summer of 1973, kicking off a ten-year, 81-issue run. Friedrich and Sutton continued as the creative team for the first issue, with Jim Mooney (who’d been inking

Sutton’s pencils) becoming the main artist with issue #2, and Tony Isabella taking over the writing chores from Friedrich with issue #7. Isabella stayed on through issue #19, only to leave after Marvel editorial screwed up the ending of a two-year storyline (Isabella, who started as a comics fan and then turned pro, has been writing about comics and comics history, including his own, for over 40 years. He’s recently started a new blog here, and it’s worth checking out; it’s likely that he’ll retell his GR tale there at some point).  Mooney stayed on through issue #9, replaced by a series of artists after that, most notably Frank Robbins in issues #12 and 17-19, and John Byrne in issue #20. From then on, it’s mostly mid-level creators (or less), artists like Don Heck, Don Perlin, Jack Sparling and the like, with writers like Roger McKenzie and Michael Fleisher; Fleisher and Perlin have the

longest stint together, and manage some decent stories. Futire Marvel EIC Jim Shooter writes issues #23-27, and Jim Starlin writes and (mostly) draws #35, but otherwise it’s a long, gradual decline in interest for the character through the end of the series, with issue #81.

The GR revival came in 1990, with a new mortal — Danny Ketch — transforming into the Ghost Rider, and a more focused idea (based on the last few issues of the first volume) of GR as being a separate demon entity, a Spirit of Vengeance. Howard Mackie was the initial writer, with Javier Saltares and Mark Texiera on the art, and they

made this incarnation of the character much darker than the original, with a lot more blood, death and suffering; it’s a very ’90s book, and proved a surprise hit (in tone and fan reception, it’s a lot like the X-Force book — now Uncanny X-Force — which debuted a few years ago to a lukewarm critical reception but became a fan favorite, with early issues rising on unexpected reader demand). It helped that Mackie and Texiera stayed on the title together for the first two years — through issue #25 — and established a consistent tone. Probably the most fondly-remembered issue in this run is #15, which boasted a glow-in-the-dark closeup of Ghost Rider, an image that glowed through the night in a lot of 12-year-olds’ bedrooms (and which appears at the top of this column). Issues 28 and 29 feature an X-Men crossover with pencils by Andy Kubert (and inks by his father Joe), a team that stays on the title through issue #31. Later issues

(still written by Mackie) have artists like Blet Bevins, Ron Garney and Salvador Larroca, and tie closely into Marvel occult continuity as part of the Midnite Suns imprint, along with Dr. Strange, Spirits of Vengeance, Morbius and a few other titles. Mackie finally leaves by issue #70 (replaced by Ivan Velez, Jr), and, like its first volume, the series then limps to a quiet end with issue #93, in February 1998 (in 2007, Marvel produced GR #94, with the art meant for the series’ final issue, left orphaned after it was cancelled). 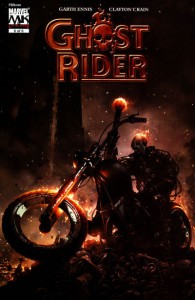 Over the last decade, there’ve been a couple of readable limited-series stories involving our flaming-skulled fiend; Devin Grayson and Trenbt Kaniuga contributed a six-issue one in 2001 that brought back Johnny Blaze as the GR host, while fan-favorite writer Garth Ennis offered two: a six-issue one painted by Clayton Crain in 2005, and Trail of Tears, another six-issue story set in the Old West, featuring an earlier incarnation of the character, in 2007. Both feature Ennis’s unique blend of satire, adventure and extreme physical violence, a good fit for the franchise.

The third GR ongoing series launched in 2006; written at first by Daniel Way, it brought 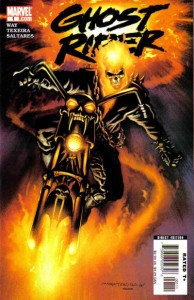 back the Saltares/Texiera art team from the early days of Volume Two, and was a modest hit. It’s probably best known now for serving as an early showcase for writer Jason Aaron, who came on with issue #20 and quickly attracted attention with his Ennis-like combination of pulp and gleeful grindhouse-movie influences. He stayed on the title through its end (issue #35, July 2009) and the subsequent mini-series Heaven’s on Fire, which concluded the storyline. The fourth GR ongoing series is just starting up now, as part of the Fear Itself crossover event; we’ll have to wait and see how it matches up with the early incarnations of the character. Whatever happens, respect needs to be paid: a (so far) 40-year run is no small thing in comics, and speaks to the Ghost Rider’s ongoing appeal to readers. Browse all the discount issues available this week, enough to fill both sides of the cover-price rack back near the west-end cash register at AABC!

With 40 years of experience in comic reading, collecting and reviewing, English Professor Phil Mateer has an encyclopedic mind for comics. Feel free to ask Phil about storylines, characters, artists or for that matter, any comic book trivia. He will post your questions and answers on the AABC blog. His knowledge is unparalleled! He is also our warehouse manager, so if you are looking for that hard to find comic book, ask Phil!
View all posts by Phil →
This entry was posted in Comics History, News & Promos and tagged Garth Ennis, Ghost Rider, Jim Starlin, John Byrne, Marvel Comics, Mike Ploog, Tony Isabella. Bookmark the permalink.