This comes in a bag, but considering the title it’s probably not a spoiler to say that, yes, there’s a death scene with the main character (of course, there was one in Superman #75, too, and we all know how that turned out, so…). Bendis and Bagley, who’ve worked on the title for eleven years (straight, for Bendis) do a good job with it; it’s an affecting end to the story, and one true to the themes that the book has covered since the beginning. This will be restarting in a few months, with a new character under the costume, but that will feel like a brand-new book: this one, at 160 issues, turned out to be one of the better comics runs in Marvel history, especially of the last 30 years: a few slow patches, but the first 25 issues or so completely nailed it, and there’ve been enough high points since then to reward loyal readers. Of all the Ultimate Universe titles, this and Millar’s first two Ultimates series were the ones good enough to 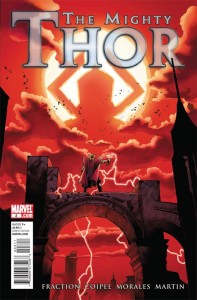 This continues to be an entertaining, well-done superhero comic: between Kid Loki, naked Sif, Volstagg the cook (and addled warrior), Odin calling the Silver Surfer a “great and gleaming gimp,” and the prospect of gods in space, battling Galactus, next issue, there’s plenty to attract readers, and keep them hooked. The lack of any mention or tie-in to “Fear Itself” is a welcome bonus — this is a stand alone tale, three issues in; between its accessibility and its easy craft, there’s no excuse not to be reading it right now. 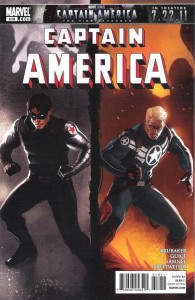 The Bucky-in-the-gulag story ends — a tad late, considering the events in Fear Itself two weeks ago, but then even the best superheroes get defeated by deadlines once in a while. The knowledge of what’s coming makes the attempts to wrap up things in this issue feel rushed, and the reference to new subplots/missions involving Bucky-Cap now just seem kind of weird, but props to Brubaker: he’s made the relationship between Barnes, Natasha, Sam and Sharon such a centerpiece of the book for so long that having Steve Rogers back as Cap next issue is more a cause of disappointment than anticipation. That’s the sign of a good writer. 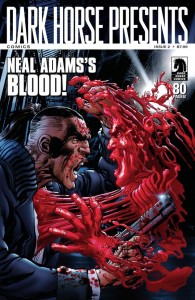 Plenty to like here — for $8, you get eight-page story chapters from each of the above creators, plus a few more. Marvel at Chaykin, Corben and Adams art (and note that Adams has a tin ear for dialogue even when he’s not writing Batman)! Thrill to a new Concrete story from Chadwick, a new Mr. Monster from Gilbert, and a new Finder by McNeil! Laugh at the weirdness in the Alexander and Chelsea contributions! With its focus on classy reproduction of great art, and its indy sensibilities, this comes as close to being an American version of the late-’70s Heavy Metal as any comic ever has.

Your Flashpoint tie-ins for the week. Kid Flash: Lost is the

most intriguing, as Bart ends up in another time-line, outside of the one created by Zoom; that makes him, Booster Gold and Barry the only characters who know what’s going on and remember the “real” world, so it’s intriguing just because of that. Outsider is OK, too, in its portrayal of a businessman/bad guy type who makes an interesting Lex Lutherish villain for the reformed world. The Reverse-Flash book has, obviously, a very close connection to the main Flashpoint continuity, but suffers from mostly being just a summary, not an actual story (and, at that, if you’ve been reading the Flash book you already know everything here), while Lois Lane offers an inert main character to whom things happen; there’s not much internal spark or personality, which is disappointing coming from a normally-good writing team like Abnett and Lanning; it’s the easiest of the four to leave on the stands. Speaking of which:

Stuff I didn’t buy, but wanted to mention anyway: 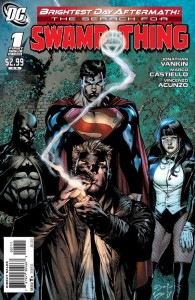 Maybe it’s because I’ve just been going through all the Hellblazer comics as part of my back-issue duties, and remembering how many great writers have worked on it (Garth Ennis, Warren Ellis, Jamie Delano, Mike Carey and Peter Milligan, among others, not to mention Alan Moore as his creator), but this comic fell absolutely flat for me: it doesn’t manage to get Constantine’s “voice” right (and name-checking one of Moore’s earliest lines of dialogue for him — “I’m a nasty piece of work, chief. Ask anybody” — makes it worse), it has a hard time getting a handle on 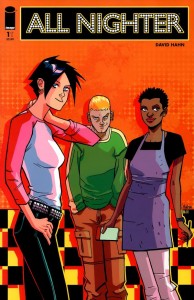 what he can and can’t do as a magician, and it acts like the whole Alec Holland’s alive! bit is brand-new, when it’s been done at least twice before. Bleh: this gives me no hopes whatsoever for the JLA Dark #1 that’s going to have Constantine and the other Vertigoish characters in it.

If you like relationship-oriented indy books with some actual adventure/noir elements thrown in, with a clean, broad-lined drawing style, this is worth a look.

Stuff I bought, but have nothing to say about, so look up earlier reviews in the archives if you

want to know why:

With 40 years of experience in comic reading, collecting and reviewing, English Professor Phil Mateer has an encyclopedic mind for comics. Feel free to ask Phil about storylines, characters, artists or for that matter, any comic book trivia. He will post your questions and answers on the AABC blog. His knowledge is unparalleled! He is also our warehouse manager, so if you are looking for that hard to find comic book, ask Phil!
View all posts by Phil →
This entry was posted in New Comics, Reviews and tagged Bendis, Bucky, Captain America, Dark Horse Presents, Flashpoint, Matt Fraction, Swamp Thing, Thor, Ultimate Spider-man. Bookmark the permalink.