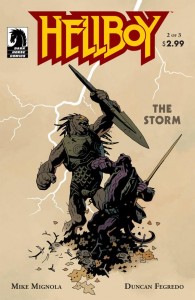 Hellboy continues to punch his way to a big climax, as this mini, and the one to follow, complete an over-three-year story that began with Darkness Calls. Each issue works alone, though; you don’t have to know everything that’s going on to appreciate Fegredo’s moody, mystic and action-filled art, or to smile at Mignola’s laconic, stubbornly-regular-guy demon (at the end, he looks out a window to see that he’s surrounded by an army of undead, rotting English knights, and mutters, simply, “Crap.” Couldn’t have said it better myself, Big Guy; we’ve all had days like that…).

Roberson spends a number of pages on a big what’s-going-on infodump; this may be a mistake, as a long discourse on oversouls and undersouls, and how they’ve lead to the various vampires, zombies, ghosts, were-creatures and mummies running around, is considerably less exciting than just watching Allred draw them all in his sexy retro style. The issue’s action is confined to a duo of monster-hunters (who in this book, of course, are the bad guys), as they blow into town, fight a vampire chick, and promise to stir up trouble. With all the plot elements in place, let’s hope that next issue gets back to the surreal, carefree interactions among the characters, and doesn’t worry as much about trying to make sense. 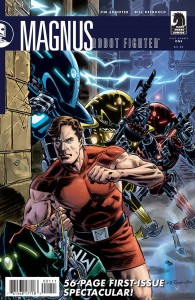 I liked this better than Solar, maybe because the mythic structure of Magnus’s backstory — the 40th-century human trained since infancy to be mankind’s best hope against its overdependence on the machines that now threaten it — is so solid, and doesn’t need to be tweaked all that much (comparing the original main story to the 1963 Russ Manning reprint from the Gold Key Magnus #1, also included, is a reminder of just how great the source material is). Shooter’s shown an affinity for this character since his Valiant days, and he offers solid, well-told adventure: at 56 pages for $3.50, Dark Horse is offering an attractive package here.

Still reprinting earlier issues — but in full color, and with a six-page discussion/interview between Fraction and Michael Chabon added. As with the first issue, this is worth a look if you don’t have the originals, and if you like complicated, cynical and sardonic action/spy adventure. 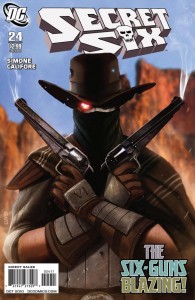 A clever, off-beat one-shot issue, as we see what our sordid crew would have been like in the Old West (Deadshot as a bounty hunter, Scandal as a sheriff, etc.). It’s a very nicely-done little morality (or, more appropriately, anti-morality) play, made even better by its lack of explanation and its grim ending: a good showcase for what makes Simone such a good writer on this title.

Another Western, of course, and told in a typically-twisted narrative. Caracuzzo doesn’t have quite the oomph of some other Hex artists (although it certainly isn’t a sin not to be Jordi Bernet), and he makes up for it with the obvious enthusiasm he brings to the page, as Hex cuts a wide swath through various femmes fatales, put-upon townsfolk and killers, some more justified than others. 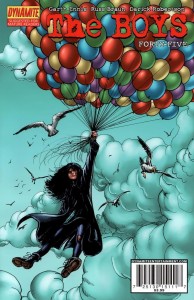 Annie tells Hughie, and things don’t go well; meanwhile, the Homelander and Vaught-American seem to be preparing for a coup, as Ennis’s superhero dystopia/love story continues to build up steam for its (still reasonably far-off) conclusion.

Stuff I bought, but don’t have much to say about:

Worth mentioning because it’s Cornell writing an extra issue of Captain Britain and MI-13, basically, one that focuses mostly on Spitfire and Blade hunting an aristocratic vampire and flirting with each other (not that the cover of this one-shot mentions, you know, any of those potentially-attractive-to-buyers elements). 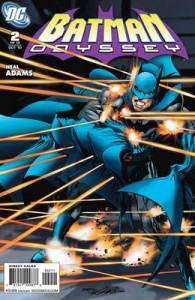 Good Lord, but this is a badly-written comic. I suppose, when you’re really really good at something, and have been for a long time, you start to think that you can do anything. Linear plot? Nah: just add flashbacks on flashbacks, and jump forward a few times, too, and it’ll sort itself out. Realism? Add tons of unnecessary explanatory material about train explosions, ballistics and body armor, and then make a big deal about two different bullets going through Batman’s arm, and leaving through the exact same exit wound, for no reason. Smooth narrative flow? Who needs that stuff when you can write sentences like these:  “The withering fire stops, as if some ghost sergeant at arms calls a ‘Halt. Parade rest.’ Now, oblivion closes around the brain of the Batman. He, his body, falls to the floor. This is unusual for Batman. The fall, for Bruce, has a contrary effect. It brings semi-consciousness. Dis-attached, Batman’s brain floats off, touching random clues flashing back…” Neal, baby, you know we all love ya, and the art on this book is beautiful, but that is some clunky, inpenetrable writing there (“This is unusual for Batman.” What does that even mean?). Maybe DC can use this as a test for aspiring writers: erase all the balloons, give them the blank pages, and say: “OK, you make sense of this.” Winners can immediately take over this, and anything currently scripted by Dan Didio.

With 40 years of experience in comic reading, collecting and reviewing, English Professor Phil Mateer has an encyclopedic mind for comics. Feel free to ask Phil about storylines, characters, artists or for that matter, any comic book trivia. He will post your questions and answers on the AABC blog. His knowledge is unparalleled! He is also our warehouse manager, so if you are looking for that hard to find comic book, ask Phil!
View all posts by Phil →
This entry was posted in New Comics, Reviews and tagged Allred, Batman: Odyssey, Caracuzzo, Casanova, Cornell, Ennis, Gabriel Ba, Hellboy, iZombie, Jonah Hex, Magnus, Matt Fraction, Mignola, Neal Adams, Secret Six, Shooter, Simone, Spitfire, The Boys. Bookmark the permalink.