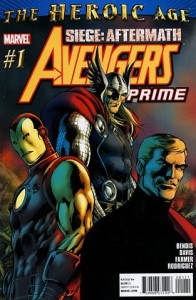 Why yes, I did buy this based purely on the fact that I remember Shaky Kane from One cover of Morrison’s Doom Patrol.  Please don’t judge me.  This was absolutely awesome and I can’t even begin to explain why.  Kane has a combo style of Moebius and Darrow, and that is the best compliment I can give.  We don’t have many copies of this indy book, so get it while you can!

Mike Allred’s art is just so pretty.  The story is fleshing itself out more and more from the first issue, and I’m really enjoying it.  The expansion of Vampires to go with the ghosts and zombies really makes this something worth checking out.  Allred, as always is above and beyond a lot of current artist, and continues to produce some of the best stuff in the industry.

Man, I’m so hip.  I start my bought list with two vertigos and an image.  But seriously, I think this is the best book that Vertigo is putting out right now, and I am including Scalped on that list.  Lemire has such a strange art style but it matches perfectly with what he is going for.  It’s a bit like the Luna Brothers where the characters he wants you to relate with are easily relatable, and every issue leaves you wanting more.  I’m saying it again; by the far the best book Vertigo has on the stands right now.  Buy it.  Do it.  Right now.

The change of art has not affected this latest arc at all.  Langridge still has complete control of his characters and it’s probably the best comic on the stands for both kids and adults.  If this and Tiny Titans ever combined together in some way, my brain might completely explode.  It’s a surprisingly good time to be a kid reading comics, and this is one of the best non-supes titles on the market right now.

Worth noting specifically for the Ryp art, which is the first I’ve ever seen of him on the “Big two”.  It’s interesting because he normally has to draw blood violence and nudity at Avatar, but this time around he just draws the Sandman.  But boy does he draw the hell out of it.  Another artist from the Geof Darrow school of “Draw Everything,” and his effort is very worthwhile.  The story itself is meh, but that art really kicks it up a notch.

At first I thought this was going to be Marvel’s big three yelling at each other for 22 pages and I was getting very angry.  But then Bendis turns it up with a trip on the Rainbow Bridge and Steve Rogers fighting a ton of goblins.  Davis is as great as he ever is, whether it’s just talking or actual fighting.  There’s also a Walt Simonson reprint as the back-up, so what’s not to like?

Another solid demo story, as strange as all the others.  Wood and Cloonan consistently put together interesting one shots based around their idea of normal people with superpowers.  This one is a time travel story which could have gone very poorly, but that is not the case.  I trust Wood to know what he’s writing, and Cloonan will always enhance whatever he puts out.  Very good stuff.

I shouldn’t like this.  But then a crew of Nazi bad guys show up, including “Armless Tiger Man” the literally armless cannibal, and I’m sold.  Add the fact that they’re teaming up with White Gorilla, and do I really need to explain myself to you?  No, and I will do no such thing.  Armless Cannibal!

Quick List of things that came out that you either already know is how good they are or you should buy the trades and find out: