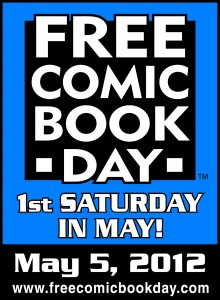 The 11th Annual FREE COMIC BOOK DAY is fast approaching and All About Books and Comics is having a huge party!  Mark your calendars now, for Saturday, May 5, 2012 from 10 AM to 6 PM.

Of course there will be lots and lots of FREE Comics, free refreshments and free balloons for the kids.

Bring the kids between 1pm and 4pm and they can get their faces painted like a super-hero!  A Balloon twister will be on hand to entertain and hand out fun Twisted Balloons as well.

Currently writer of the New York Times Best-Selling DC Comic Batman Beyond, Adam Beechen has been one of the most sought-after writers of comics and animation of the last decade. He has also served as regular writer on such popular titles as Teen Titans, Robin, Batgirl, W.I.L.D.C.A.T.S., Justice League Unlimited, Countdown to Adventure, his creator-owned Killapalooza miniseries, and DC’s major “event” comic, Countdown to Final Crisis. In animation, Adam currently serves as Executive Producer for the Hub’s hit pre-school series, The Adventures of Chuck and Friends, and has worked as Story Editor on such series as The Pink Panther, Edgar and Ellen and Hi Hi Puffy Amiyumi. Adam has also written multiple episodes for such acclaimed series as Ben Ten, Ben Ten: Alien Force, Teen Titans, Secret Saturdays, The Batman: The Brave and the Bold, The Batman (for which he received an Emmy nomination) Rugrats, The Wild Thornberrys, X-Men: Evolution, , Little Bill, Jackie Chan Adventures, Static Shock and Mucha Lucha, as well as the live-action kids’ series Ned’s Declassified School Survival Guide, Out There, and The Famous Jett Jackson..

Dustin Nguyen is an American comic artist whose body of work, for the past 10 years, includes flagship titles for both DC Comics and Wildstorm. His past projects include Wildcats v3.o, The Authority Revolution, Batman, Superman/Batman, Detective Comics, his creator owned project- Manifest Eternity, Batgirl, and Batman: Streets of Gotham. He is currently exclusive to DC Comics, writing as well as illustrating Justice League Beyond .  Aside from providing cover illustrations for the majority of his own books, his cover art can also be found on titles from Batman Beyond , Batgirl, Justice League: Generation Lost,  Supernatural and Friday the 13th, to numerous other DC/WS titles.