It Came From the Back Room #4

Standard recap: I’m slowly going through AABC’s one-million-plus back-issue room, restocking the boxes on the sales floor and pulling stuff to sell as discount/overstock/special items. I’m going through the alphabet backwards (don’t ask), and at my speed (especially with the school year now in full gear), this amounts to a two-year project. I’ve currently finished the letter “N” and started on the indy “M” books. Here are some of the titles I’ve been encountering: 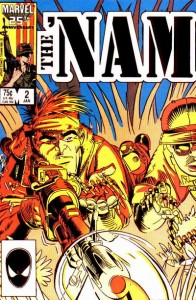 First published in 1986, The ‘Nam was that rarest of birds: a realistic, well-written war comic. Writer Doug Murray and editor Larry Hama were both Vietnam vets, so the stories had a gritty reality — as gritty as a regular Marvel book in the ’80s would allow, anyway, which meant no swearing or graphically-portrayed violence. Murray began the book’s run with an inspired set-up: it would start in 1966, and each issue would take place one month later than the previous one, running up until the last helicopter whirled out of Saigon. Characters would rotate in, do their time and either die or leave and go back to the States, and be replaced by new recruits. There wouldn’t be glorified kill-the-Commies rants or testosterone-fueled fantasies, just an honest attempt to tell the stories of the men and women, on all sides, who were part of the war.
The early issues were helped considerably by the choice of artist: Michael Golden, whose pencils were realistic enough to make the settings and equipment feel real, but whose knack for caricature also let him make all the characters seem individual and memorable. 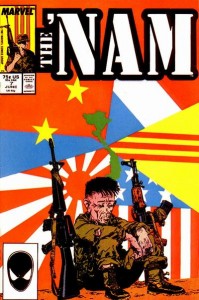 The result, presumably to everyone’s surprise, was a hit: the book sold very well (the first issue even went into a then-rare second printing), and was embraced by veterans, many of whom wrote in, creating a lively and thought-provoking letters page. Golden continued as artist for the first 13 issues (although he only does a few pages in #7), to be replaced by Wayne Vansant, who wasn’t as individual or startlingly good, but continued to provide steady, realistic pencils that went well with Murray’s steady, realistic scripts, and kept it up for a number of years. 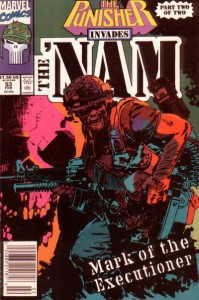 It couldn’t last forever, of course: eventually, Hama was replaced as editor, and the new guy, following Marvel’s urging, wanted to forget about the real-time format and include continued stories; worse, he wanted to tie the book into the *choke* Marvel universe, by having a story showcasing Frank Castle, the Punisher’s, time in the war. Murray wouldn’t put up with that, and he left with issue #45 (although he came back for the anniversary issue #50) and, sure enough, the book started to do multiple-part stories, and, in issues #52 and 53, guest-starred Frank. Those issues sold very well, but at the cost of the book’s soul,

and subsequent writers could never regain it. The ‘Nam limped on to issue #84, with a few bright spots along the way (Russ Heath art in #65, and scripts by Don Lomax, another vet who had been both writer and artist of his own Vietnam Journal, for the final year or so), but when the last copies appeared on the stands in 1993, not that many readers were left to mourn it. Still, that’s an impressive legacy for a war comic, especially in the superhero-drenched ’80s and ’90s, and even today there are veterans who ask about its back issues. Here’s your chance to get a good percentage of ’em for just a buck or two each. 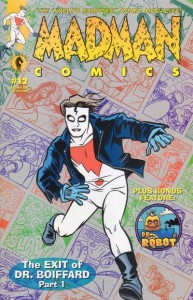 Fans of Michael Allred’s ultra-clean, cartoony, ’60s-drenched pop-art sensibility (from the late, lamented X-Statix, or from the current and very cool iZombie, or from some of his other Vertigo guest-shots for books like Fables) owe it to themselves to check out this, his first creator-owned hit, with well-regarded runs both in the early ’90s and just recently. It’s colorful, experimental in both layouts and storytelling, and always high-energy and fun, with mad scientists and floating brains and giant robots and zombies and all manner of pop-culture blenderized treats: we didn’t have a lot of extra issues in the back, but we had some, and since most are stand-alone episodes they’re all worth a look. 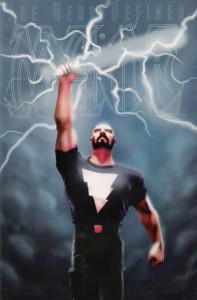 This has a lot of parallels to Madman: an early, career-defining work (the first Mage mini-series, The Hero Discovered, appeared in the mid-’80s) by a well-regarded writer/artist, this time Matt Wagner. He’s probably best known for Grendel, but has gone on to do mainstream work for DC titles like Batman, The Demon, and, currently, Madame Xanadu. The second Mage volume, The Hero Defined, came out in the late ’90s, and deepened the first volume’s Joseph Campbell-inspired themes of heroic quests and Arthurian archetypes; Wagner has always said that the work is meant as a trilogy, and if the every-dozen-years pattern holds readers should look forward to the final episode sometime in the next few years. That’ll make it a 30-year-long production, one that’s filtered its creator’s own life experiences through its Everyman character’s, an ambitious and thought-provoking project that’s always managed to sneak in a lot of superhero-type punching and cool monsters too. As with Madman, we didn’t have a huge overstock of these — a lot more of the second series than the first — but it’s a work worth seeking out, just the right combination of obscure and worthwhile to reward readers for their effort.

With 40 years of experience in comic reading, collecting and reviewing, English Professor Phil Mateer has an encyclopedic mind for comics. Feel free to ask Phil about storylines, characters, artists or for that matter, any comic book trivia. He will post your questions and answers on the AABC blog. His knowledge is unparalleled! He is also our warehouse manager, so if you are looking for that hard to find comic book, ask Phil!
View all posts by Phil →
This entry was posted in Comics History, News and Events, Reviews and tagged Allred, Doug Murray, Madman, Mage, Matt Wagner, Michael Golden, The 'Nam, The Punisher. Bookmark the permalink.