And we’re back!  This week will be a special “dead Marvel characters” week at Fresh Eyes, so let’s see what I picked out.  Oh! Spoilers ahead, don’t forget that. 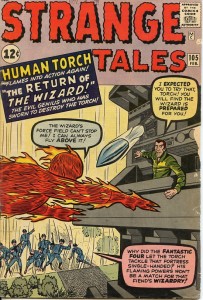 There’s nothing quite like a book where all the main good guys and bad guys do is narrate at each other.  “I’m doing this!” “Well, I’m doing this which leads to this!”  If people actually talked like this, I think we’d all be in a much better place, free of sarcasm and snark.  The main story is all about the Human Torch in his huge battle with The Wizard (clever name).  They fight each other through various means and, BIG surprise, the Torch wins.  It’s pretty generic, but what you’d expect from this time period.  This was before either Dr. Strange or Nick Fury appeared in the title, so the back-ups are still horror and suspense type stuff.  One’s a weird Robinson Crusoe prequel, and the other is an even stranger minimalist Steve Ditko piece.  Overall I’d label this issue as “Weird.”  More info can be found HERE.

The Human Torch is dead!  He died last week in the pages of Fantastic Four.  It was sad, but very well written.  FF is still an ongoing title, but it’s about to be rebooted.  If you’re looking for older torch stuff, grab an “Essential” trade paperback; it’s cheap and has plenty for ya’. 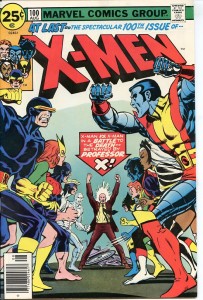 I won’t lie to you.  I’m worried whenever I see a Chris Claremont “written by” headline.  This is supposed to be the era where Claremont is the strongest.  It’s actually not a bad comic, but the dialogue is bordering on cheesy insanity.  However, the Cockrum art is the real draw.  It’s some of the best stuff I’ve seen from the 70’s.  It’s quality stuff put together to really enhance the story.  I was completely  taken aback by the quality of some of the spreads, and I really couldn’t stop looking at it.  This issue shows the first of many Jean Grey deaths that the X-men would deal with, but it’s definitely not the last.  It’s the middle of a story, but it’s still completely accessible to a reader.  It’s the “kinda” way you wish modern comics were written like.  More info can be found HERE.

The X-Men are dead!  Well, at least some of them are.  Based purely on that cover, Jean Grey, Banshee, Nightcrawler and I think Professor X are all dead.  Beast and Angel have been completely transformed, Wolverine just got out of hell, so on so forth.  This is pretty much a soap opera, you can pick up any issue of X-men and get something completely different.

Ok, this one’s just really weird.  The first pages introduce Tagak, the Leopard Lord who comes out of mirrors.  This is not a joke.  Actual quote from the comic: “What is it?  It sure ain’t Creedence Clearwater Irene!”  Do you people see what I’m dealing with week in and week out for you?  The issue itself is all over the place, at one point applauding the plight of hippies, at the other, having a Tiger attack a blind man.  I will say that the Gene Colan art is the cleanest of the three books I read this week.  It’s as though Gerry Conway didn’t want to write that much, and just let Colan’s panels do the talking.  It’s smooth, crisp and easy to read.  Like I said, it’s got tigers attacking people, can you really complain about that?  More info can be found HERE

Daredevil is dead!  Well not exactly.  He’s dropped the mantle and is just Matt Murdock right now.  He has been replaced in Hell’s Kitchen by Black Panther, whose ongoing title is actually pretty good.  If you’re wondering about the trials and tribulations of Murdock, there’s a 4-issue-mini called Daredevil: Reborn.  It’s… ok.

And that’s the week!  Thanks as always for reading, and enjoying the opinions of someone who doesn’t even have a college degree (Yet! Let’s be clear on that.  Yet!)

One Response to Fresh Eyes on Old Books #15 by Dan!