The Latest and (Mostly) Greatest #62 By Dan!

It’s Thanksgiving week; the holidays are in motion; you’re out with your loved ones, and I’m writing comic reviews. All is right in the world. Let’s do this! 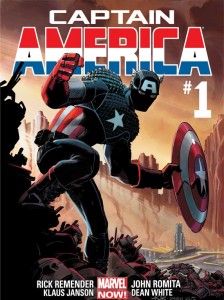 This is a comic book. The more I think about it, that’s almost all I have to say about it. It’s about as generic as a Captain America book could possibly be. Remender may be building to something, but it feels like a slower burn than normal. We can’t forget that Romita Jr. doesn’t try as hard if he’s not doing creator-owned work. Mix in the piece where Steve Rogers suddenly has an abusive father I’ve never heard of, and acts quite a bit out of character and ends up stealing a baby, then you know why I’m just not sure whether I care about this comic. It’s very very meh, and this is a Marvel NOW! reboot that doesn’t hit any chord I care about.

Interesting. Interesting, interesting, interesting. That’s all I can come up with to describe this issue. As a first issue, it’s very content-building, with Waid putting the pieces together to make Hulk an agent of S.H.I.E.L.D. by making this one big ol’ rough-em-up mission. The more I stop and think about this issue, the more I realize that I did enjoy it. Yu’s art is up to it’s traditional quality (which is very much a matter of opinion, but I like it) and the story we’re given is technically self-contained while moving pieces in place for a next issue. It’s fun stuff by a strong creative team, and I wonder where they’ll go in the future.

Speaking of generic boring first issues, here’s Judge Dredd getting an American treatment from IDW publishing. There’s two stories in here, both setting up the fact that robot’s can’t be trusted, and both dealing with lots of death. It’s Dredd folks! Death and destruction are to be expected. The problem is that these stories just don’t do much of anything. The first is part of an ongoing story, but I’m not quite sure I care. Not enough was laid out to bring me back for the second issue. The other was a done-in-one short story that didn’t really grab me as being something I should care about. Overall it was a mediocre American adaptation of a solid British franchise. Sounds like a Stallone movie I’ve heard of…

All right, let’s gush about The Goon for a little bit. The Goon is the reason I got anything but Big 2 published comics. Month in and month out, it’s the best title published by anyone, and I get excited every time an issue comes out. Some of them can be heartbreaking like the Chinatown graphic novel Powel released, and some of them are just ridiculous weird S#&! like this issue. Powell ties his Billy the Kid’s Old Timey Oddities series into Goon lore and all it takes is the Ossified Baby of Nuremburg. You heard me. To put it simply, every issue of The Goon is beautiful, and this is no exception. It’s the best comic you probably aren’t reading, so get the trades and step up. 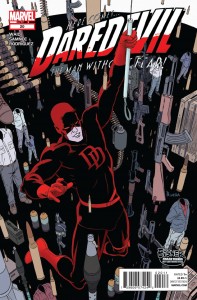 Now, this is probably the best comic on the stands that you are already reading! Daredevil has been absolutely fantastic for every single one of its issues, and that’s been mostly on account of the art and consistent storytelling (that’s right, it’s that simple!) Things get even weirder with this story involving The Spot and headless people being traded into slave labor and just a chaotic situation for a blind lawyer from Hell’s Kitchen to deal with. This is without a doubt the best book Marvel has on the table right now, and if you’re not reading it, you’re missing out. Samnee is killing it as he always does, and Waid is proving why he’s the man for all your Silver Age fun needs.

I grabbed this to look through because I love Ryp’s artwork and he doesn’t disappoint. He has so much attention to detail that even using Clones that look exactly alike still works in the story. You can tell exactly which character is which, and that helps this complex story immensely. The story itself is OK, a man finds out he’s one of many clones and another clone is out to kill all the clones. The only problem is our main character has a wife and kid kidnapped by this killer clone. It’s good traditional sci-fi and I can’t complain about any of it. Fun stuff with potential to build into a nice little story. 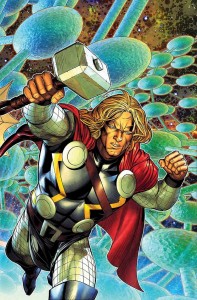 All right folks, a Bendis rant coming at you! This book is miserable. It’s Bendis’s farewell to the book he’s written for 200+ issues. That’s insane and commendable, but his ending is much worse than anything he’s put together. He undoes everything Siege did, he shoehorns a rapid fire that gives him a chance to pawn off splash pages to artists and then he writes a 3-page goodbye. Brubaker got one page for Cap. Gillen got to say goodbye to Thor in the second issue of Iron Man. But as a special case, you guys get THREE PAGES of Bendis prattle for 5 dollars. Oh right, this book has a $4.99 price tag. And he uses his goodbye to hype up the Ultron Imperative, a book he delayed and forgot about until after his Avengers run. This is drivel. The beginning of his run was fantastic, and to see it end like this is just upsetting and sad. There was so much potential, but if you read Bendis comics, quit before you get to Secret Invasion. End of Rant.

Sorry guys, I just blacked out for a second. Let’s do some quick hits! 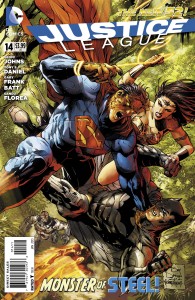 Justice League #14 Writer: Geoff Johns Artist: Tony Daniel: Johns rambles on about a character that you don’t care much about and it gets way too wordy. Sounds like a summary for this entire JLA reboot…

Hawkeye #4 Writer: Matt Fraction Artist: Javier Pulido: Fantastic, beautiful stuff. Getting Pulido in to replace Aja for an issue is a great choice, and it’s like nothing has changed. Very close to a perfect book. 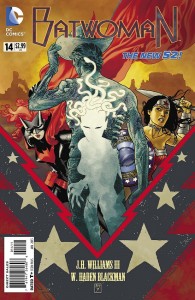 Edgar Allan Poe’s: The Conqueror Worm Artist: Richard Corben: Corben adapts a Poe poem in his own twisted way, so you know now one makes it out alive. Very good stuff, especially if you like Corben, which I do. Simple as that.

Uncanny X-Force #34 Writer: Rick Remender Artist: Phil Noto: The penultimate issue of the title brings the story to its effective close. A great title that’s ending soon. Worth rereading when it’s over. 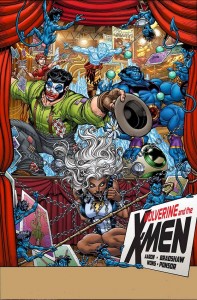 Wonder Woman #14 Writer: Brian Azzarello Artist: Tony Akins: I like that Azzarello seems to be world-building in a way that stays out of possible crossovers. This is another great issue that moves the plot along.

Amazing Spider-Man 698 Writer: Dan Slott Artist: Richard Elson: This book is completely insane. I can’t even talk about it. One of the best issues of the year, great set-up for the future, and it actually made me say “holy S#%@” out loud when I read it. If that’s not a ringing endorsement I don’t know what is.

And that’s the week. Only a little bitterness… not too bad!