The Latest and (Mostly) Greatest #37 by Dan!

All right folks, this is the first fifth week of the new 52. What does that mean? Well you’d think that smart marketing would put every single mini series out this week to fill the void, but no! We get two whole DC comics. And I’m not even sure I’m actually going to talk about them. Let’s do this! 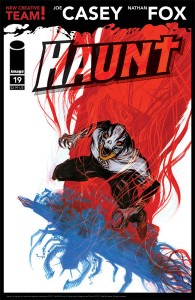 What a different two weeks makes! You change the team and drop all the crap and suddenly this is just a bizarre fun comic. Nathan Fox’s art is completely manic, with just so damn much to look at. Joe Casey suddenly makes this a really readable comic with a whole lot of excessive swearing. In addition to Butcher Baker Righteous Maker, Image has Joe Casey writing two of the best comics on the market. You can pick up this issue and not have to worry about the other 18 bogus issues that came before it. How odd that the Kirkman/MacFarlane/Ottley team-up could suck so bad, and yet Casey and Fox knock it out of the park in one issue! This is freaking fantastic.

I always run into the problem that Risso’s characters always look a lot alike. But when you make them creatures that ARE supposed to look the same, you don’t have nearly the same problem. This sci-fi tale is pretty bizarre. It comes off like Commando in that you can’t understand what the main character says, and he’s trying to save a kid. That’s about where the similarities end. This is a comic that has to be re-read, because Azzarello writes it in an entirely different language sometimes, but it’s fun. I find myself wondering what the heck is going on and what’s going to happen next, and that’s exactly how you want a Vertigo comic to go. 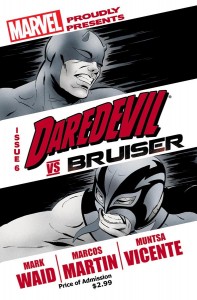 This issue sees the end of Marcos Martin. He’s moving on to greener pastures (creator-owned work with Brian K. Vaughan), but he goes out in his usual oh-so-pretty style. The story by Waid is going back to more traditional “we-should-not-kill-my-girlfriends” Daredevil stories, and it’s impossible not to love. Daredevil battles the Bruiser, who is a villain in Booster Gold, and DD has to use different strategies to take him down, all introduced by Waid and expanded on beautifully by Martin. There’s nothing about this comic to hate, everything wrapped up in a pretty $2.99 box. That’s a Christmas gift that comes highly recommended. 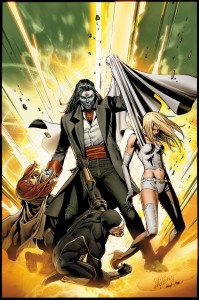 This is a strange little comic. It’s the first time I can honestly remember enjoying the character of Sinister, so it’s obviously doing something right. However, the art is an issue. Pacheco isn’t much of a machine (Get it? Pacheco Machine? Pachinko Machine? Oh man that was an old cheap joke…) and he needs some fill-in people to help him even get this issue under wraps, and the appearance definitely suffers for it. And with Greg Land waiting in the wings, it’s about to get worse. That’s unfortunate for Gillen, who is working up a fun story that I enjoy reading. It’s just the art is absolutely killing me, and doesn’t seem like it’s going to get better any time soon.

This is the final issue wrapping up Wolverine’s time in San Francisco, even though he’s already two issues deep back in New York (don’t get me started…). This is Aaron at his most fun, definitely not like the Hulk… Wolverine and Gorilla Man join an old “sensei” to fight dragons and bring down an opium ring in underground San Francisco. I mean underground in the literal sense here, selling opium under the ground. It’s pretty fascinating, crazy stuff with Aaron just going to town, creating characters and killing them in the span of three issues, and I very much enjoyed it. It sounds like he’s going to tie this in with Wolverine and the X-men, so watch out for that. Aaron’s strongest work is PunisherMax (coming to an end at issue #22) and this X series, so be sure to check it out.

That’s really the main books of the week, so let’s do some quick hits on others: 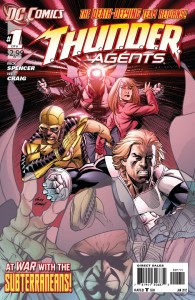 T.H.U.N.D.E.R. Agents #1 Writer: Nick Spencer Artist: Wes Craig: This series didn’t really interest me pre-new 52, and this series doesn’t change that. But it is worth noting because it’s going to wrap up the previous story, so enjoy if you want!

Hellblazer #285 Writer: Peter Milligan Artist: Giuseppe Camuncoli: As long as Milligan keeps writing this series, it’s going to be worth reading. And guess what? He’s still writing it. It’s a journey for Hellblazer’s cursed coat, and it’s stupidly fun stuff.

Flash Gordon: Zeitgeist Writer: Eric Trautmann Artist: Daniel Indro: This $1 comic does not suck. And for 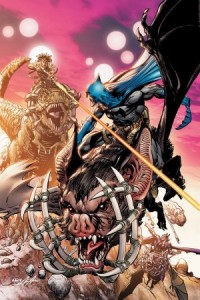 Dynamite properties, that’s actually a ringing endorsement. If you like the character, I think you’ll like this, but it also acts as an origin, so don’t be surprised by that.

FF #12 Writer: Jonathan Hickman Artist: Juan Bobilo: This wrap-up of some pieces of Fantastic Four 600 from last week is not as good, but it’s fine. And if you want pieces to the overall puzzle, check this out.

Batman Odyssey V.2 #2 Writer/Artist: Neal Adams: I still have no idea what the hell is going on in this comic. That is all.

And that’s it! More reviews of the old stuff this weekend, and I guarantee longer posts than this when it’s not a fifth week!