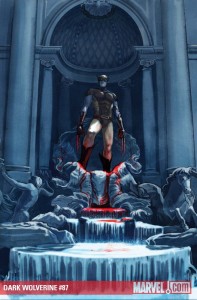 comics, my new blog title and me! What more do you need?  Let’s see how fast I can screw up this new format!

That’s right, I’m using a picture for this one.  I honestly think this comic was the worst of the week, for a multitude of reasons.  Daken is just floating around flirting his way to the underground in France.  He’s stopping kidnappers (not as cool as Taken) and attempting to seduce them before murder.  Up next is a Franken-Castle crossover that hopes to get better, but this?  Oh God no.

This has as many problems as any normal Jeph Loeb written comic can possibly have.  The character work is confusing, the plot advancement is lacking, and the overall story is just a pile of “meh”.  Apparently some new team is organizing together to be part of the Ultimate universe, and I don’t care about any of these characters.  I always like Art Adams work, but it’s all been with Jeph Loeb lately, and that’s just not worth it.  Actually that’s a pretty fair assessment of the entire thing: “Not worth it.”

I like Pelletier, I swear I do.  His style worked for me back on Exiles, among other things.  But this story is so off the rails (oh hey! A Jeph Loeb idea gone awry! Shocker…) that neither Pelletier nor the competent Greg Pak can fix it.  You can tell Pak is just screwing around with whatever they force him to do, and he’s doing his best, but the Hulk is in a very bad place right now.  Unfortunate.

I have enjoyed the Second Coming Storyline.  Both X-Men Legacy and Uncanny have definitely produced a solid and fun storyline.  However, the extraneous titles just aren’t quite working for me at all.  They force the characters to be involved, but then ignore most of the main plot.  I just feel bad for completists who have to get every one of these titles, and get suckered into issues that don’t really do much at all…

Dropping Howard Porter was a serious improvement for this title, but that’s about the only positive thing I can say.  Giffen is a capable writer, and the same can be said for Derenick, but really, Magog?  Who at the DC offices really thought the story of some army A-hole given the power to anger the JSA would be a good idea.  It’s getting cancelled soon, as it should be, then we can all just forget about it.

You ever wondered what Jonah Hex would be like if his horrible disfiguring scar was replace by being African-American?  Well this is the closest we’re going to get, and it’s not very good.  Weird religious aspects mixed in with the racism of the Old West being shoved down your throat leads to a strange new mini-series that’s better left forgotten.

Speaking of weird religious undertones, here comes Azrael.  I have no attachment to this character, unlike the 90’s fans who brought it back, and if this is what I missed in the 90’s, I’m over it.  Nicieza has been around as long as I can remember, but this is just not very good.  There’s a ton of weird religious ideas thrown around here, and that just screws up what is already a not so good idea.

This entry was posted in DC, Marvel, New Comics, Reviews. Bookmark the permalink.