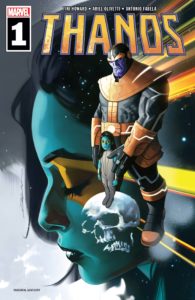 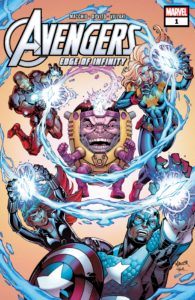 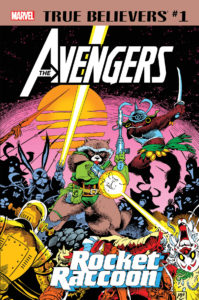 As they’ve been doing all month, Marvel release lots of Avengers (or Avengers-adjacent) books this week, in anticipation of the big movie. Thanos is a mini-series about the Mad Titan’s first meeting with the young Gamora; that will be familiar to movie fans, but this version expands it, and Ariel Olivetti’s clear, precise art handles both the many violent deaths and the young orphan girl’s poignant emotions with skill. 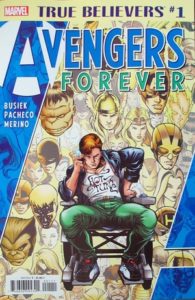 Avengers: Edge of Infinity is that rarest of modern comics: a single issue that tells a complete 20-page story, involving the team’s battle with MODOK.  It’s got an Avengers line-up that movie fans will recognize, and so should make a simple, cheap gift (half the cost of a ticket), especially to kids who’ve seen the film and want another tale about their heroes.  Two $1 “True Believer” books are also out: Rocket Raccoon, while labeled as an “Avengers” book, has them nowhere to be found — but does offer the 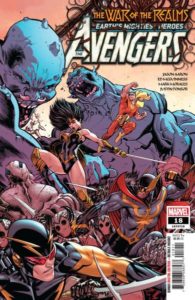 first of that furry Guardian of the Galaxy’s own comics, detailing his origin and written by his creator, Bill Mantlo — and penciled by, of all people, Hellboy creator Mike Mignola — while Avengers Forever is the initial installment of a critically-acclaimed 12-issue series by Kurt Busiek and Carlos Pacheco that drew together an all-star past/present/future team of Assemblers to fight the time-traveling villain Immortus (or Kang, or whoever else he’s been in his long career).  The

regular Avengers title, also out, will not be that accessible to movie fans, since it’s part of the sprawling “War of the Realms” crossover event — and doesn’t even have any actual Avengers in it, focusing on the characters of the Squadron Supreme instead (although their US government-sponsored leader, Agent Phil Coulson, is a familiar face — and there’s a last-page twist that readers should appreciate). Uncanny X-Men also has a WOTR mini-series beginning, with the mutants battling the invading Norse monsters; unlike many such spinoffs, it has close ties to the X-Mens’ regular book, so readers of that will probably want to get this too. 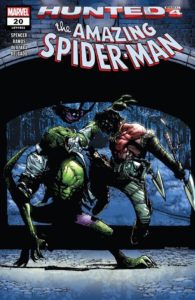 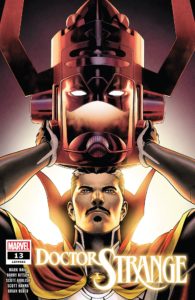 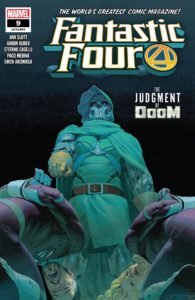 up “Hunted” serial, and watching penciller Humberto Ramos handle dozens of villains in his fluid, cartoony style is still the biggest attraction.  Doctor Strange has Doc vs. Galactus, as that planet-eater has been exiled to the magical dimensions by an alien sorcerer, and his absorption of mystical energy, instead of his normal regular-universe scientific type, threatens to drive him insane and destroy both realms; it’s got the typical clever 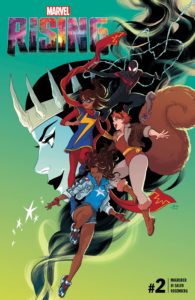 Mark Waid script, plus the return of a couple of familiar faces, both good and bad, that longtime readers should appreciate.  Fantastic Four ends author Dan Slott’s first FF-vs.-Doctor-Doom story; it’s decent enough (Doom’s a hard bad guy to screw up, which is why Marvel writers use him so much), although resetting him to his despot/power-craving factory settings may upset readers who’ve been following his different character arc over the last couple of years. Over in 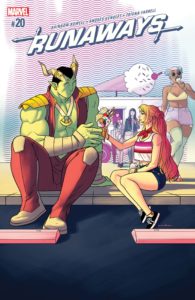 the YA wing of the Marvel Universe, Marvel Rising teams Squirrel Girl, Ms. Marvel, the Miles Morales Spider-Man and other characters familiar to younger readers as they go up against revived Arthurian villainess Morgan le Fay, while Runaways, also a current TV tie-in, continues to be one of the best of the bunch, with Rainbow Rowell (who writes YA novels for a living) having reintegrated the title’s classic lineup from the Brian K. Vaughan early years, and mixing high-stakes action, teen relationship drama and comedy into an easy-to-like stew that’s accentuated by Andres Genolet’s attractive, modern-looking visuals. 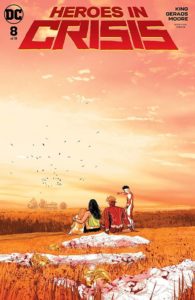 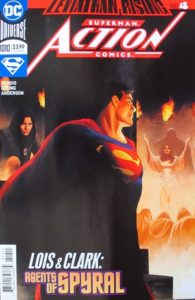 Heroes in Crisis reaches its penultimate issue, with an explanation of what happened and who caused it; it’s basically an illustrated monologue by the character involved. Fortunately, King and Gerads have enough chops to still make it work, although a lot depends on whether you think the explanation is realistic, and what you think of the character.  There’s still an issue to go, though, so I’m reserving judgment until the whole plot’s finished and clear.  Action Comics continues its big “Leviathan” arc, 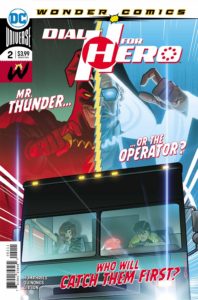 wherein that super-secret world-dominating organization has taken out most of the other super-secret world-dominating orgs; it’s got good Lois/Clark stuff (typical for Bendis), and more than enough action, with the kind of cliffhanger ending you’d expect from the fourth part of a six-part story.  Dial H For Hero keeps getting by on the same high-concept hook it’s been using since its origins in the 1960s: a magic rotary phone dial that lets you transform into a brand-new superhero every time you use it (the original used heroes 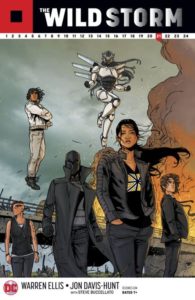 submitted by readers — also a neat high-concept hook; this one doesn’t, but is still fun, especially when there’s a hero, as in this issue, that lets Joe Quinones use his manga-imitation skills, complete with speed lines).  Meanwhile, The Wild Storm continues wrapping up Warren Ellis and Jon Davis-Hunt’s reboot of that universe, with the entire cast finally together, a big battle to be fought, and everything streamlined and turbo-charged for the 2020s; it’s been a good example of how to do that sort of thing well — and dependably, producing an on-time episode each month of its two-year run (a lesson certain other DC comics could take to heart…). 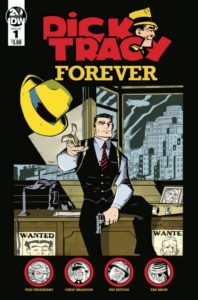 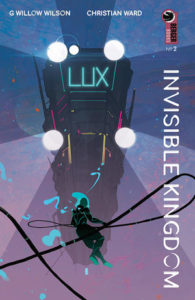 Fans of Jeff Lemire and Dustin Nguyen’s Descender should be happy about this week’s release of Ascender #1, their sequel to it; the former ended with a machine-fueled robot apocalypse, while the latter begins much later, with the struggling descendants having built a society based on 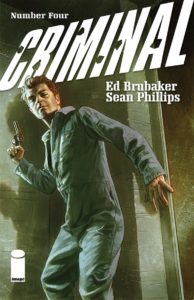 magic instead of science; both have the dreamlike art and clever plotting that made Descender a steady seller and critical favorite.  Dick Tracy Forever is a sequel too, to the Allreds/Tomasso Dick Tracy mini-series of a few months ago.  This one’s written and drawn by Michael Avon Oeming, so it continues the franchise’s tradition of eye-catching, idiosyncratic art.  Given that this first issue is set in 1931, and the next in 1951, it’s going to be time-skipping 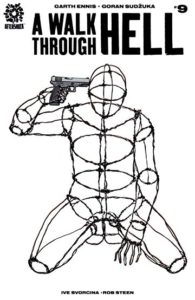 retrospective of the yellow-slickered cop’s career; that’s fine, though, since Chester Gould knew how to build a strong foundation (especially with his bad guys), and this looks more than cool enough to continue that tradition.  Invisible Kingdom, writer G. Willow Wilson’s new series after five years sheperding the new Ms. Marvel to success, is a Saga-like space opera following two principle female characters, one a novice initiate of a galactic religious cult and the other a hard-nosed, Han Solo-like space-freighter

captain; watch the careful world-building as their two stories begin to converge around a universe-spanning web of corruption.  Criminal continues offering perfect little noir tales set in Ed Brubaker and Sean Phillips’s crime-infested universe, sometimes with members of their vast rotating cast and sometimes with new ones; this issue has a stand-alone story featuring a regular, anti-hero Ricky Lawless, so it’s a great opportunity to see just how good those two guys are at this stuff — and, if you like it (and why wouldn’t you?),

there’s a vast back-catalog of collections just as good. A Walk Through Hell detours from its main story to look at Captain Driscoll, and her experience in the warehouse/hellmouth that’s the center of action for this series; it takes off in a startling direction, too, although it eventually circles back: just another chapter in this dark-even-for-Garth-Ennis comic.  The Wicked and the Divine is on issue #43 of 45, and continues revelations and resolutions — plus an unexpected new complication at the end; it’s also an issue that emphasizes

and underlines the pop-music culture themes that this series has been rotating around for the last four years, all to typically-entertaining and emotional effect.  Meanwhile, Rick and Morty offers yet another twisted, darkly-hilarious take on that eagerly-awaited TV-cartoon series, while The Avant-Guards, about an aspiring Division IV girls’-basketball team at a theater-arts college, gets by on its charmingly cartoony art (Noah Hayes will be familiar to fans of Boom!’s earlier Goldie Vance), and accessible, diverse characters, attracting an audience that’s become increasingly important to comics publishers over the last few years.

With 40 years of experience in comic reading, collecting and reviewing, English Professor Phil Mateer has an encyclopedic mind for comics. Feel free to ask Phil about storylines, characters, artists or for that matter, any comic book trivia. He will post your questions and answers on the AABC blog. His knowledge is unparalleled! He is also our warehouse manager, so if you are looking for that hard to find comic book, ask Phil!
View all posts by Phil →
This entry was posted in New Comics, Reviews and tagged A Walk Throug Hell, Ascender, Avant-Guards, Avengers, Criminal, Dial H for Hero, Dick Tracy, Doctor Strange, Fantastic Four, Heroes in Crisis, Invisible Kingdom, Marvel Rising, Rick and Morty, Runaways, Spider-man, Superman, Thanos, The Wild Storm, War of the Realms, Wicked and the Divine, X-men. Bookmark the permalink.