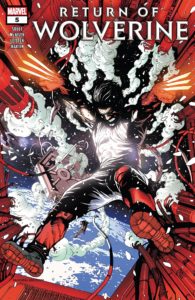 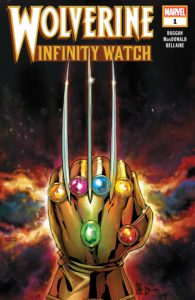 The original Wolverine, officially back from the dead, is all over Marvel’s comics this week: but the first one to read is the finale of Return of Wolverine, which resolves his fight with the villainess Persephone, who wants to destroy most of the world and rule the reanimated corpses; it has lots of space-satellite battling, and Steve McNiven’s got one of those accomplished, realistic-superhero styles, like Mike Deodato Jr.’s, that makes it all look great. The last panel of the book

leads pretty much directly into Wolverine: Infinity Watch #1, a new ongoing series wherein Logan gets info-dumped by Loki about the now-sentient Infinity Stones, has a conversation with his future-Phoenix-Force-imbued self, and refuses to go after the Time Stone, which is currently the only one on Earth; since many Bad Beings are also after it, though (and given the title of this comic), that won’t last for long.  Hulkverines is a three-part mini-series pulling together Logan, the currently-Immortal Hulk, and the newcomer combo of them both, Weapon H, with gamma-centric bad guy and Hulk nemesis The Leader trying to manipulate everyone into killing one another; Greg Pak is a trustworthy writer 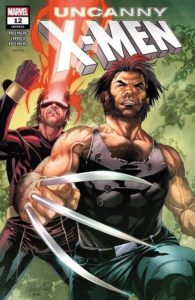 for delivering a readable and fast-moving plot and plenty of action (and interaction) for artist Ario Anindito to draw, and the shortness of the story makes it more attractive (and cheaper) for fans of any of those three characters.  Uncanny X-Men sees Wolverine and Cyclops beginning a resistance movement against the government’s current round-up-all-mutants policies (helped by most of the other X-Men being off in Nate Gray’s Age of X-Man pocket universe); they do some damage, free some allies (mostly former New Mutants, who’ve apparently been having a bad time of it…), and generally kick butt, exactly what we all want out of a story 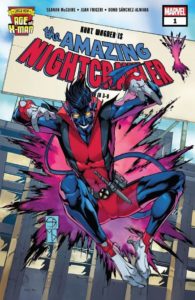 like this.  Meanwhile, off in that Age of X-Man world, we get The Amazing Nightcrawler, which sees Kurt Wagner living the high life as a swashbuckling action-movie star and honored member of the X-Men… except that the dystopian features of the society, especially its ban on any emotional/family/sexual relationships, are beginning to grate on him, and quickly lead to trouble. A happy/debonair Kurt is fun to watch — even if the “happy” isn’t going to last — and fortunately writer Seanan McGuire has him talking standard English, instead of the annoying “Vhat is zis?” German accent he’s been sporting in one or two of the other X-books, so it’s all easy to like. 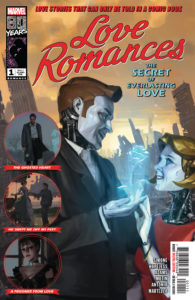 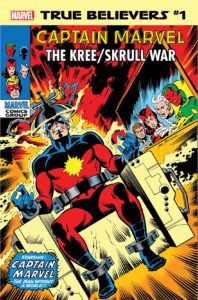 Love Romances is the only Marvel #1 with actual new 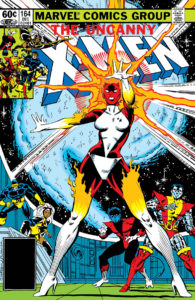 stories this week; it’s part of their 80th-anniversary genre one-shots, with four short love stories: a fable-like/poetic one from Gail Simone and Roge Antonio; a wordless cartoony haunting one by Margaux Motin, Pacco Dorwking-Carter and Lee Loughridge; a possessive-father obstacle, also fairy-tale like, from Dennis Hopeless and Annapaola Martello; an arch science-fiction one from Jon Adams; and the usual two-page historical article with some cover examples.  Three new Captain Marvel “True Believer” $1 reprints are 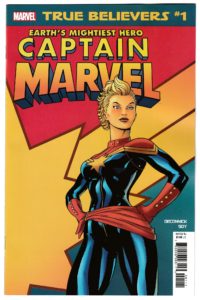 out: Kree-Skrull War reprints the original male Captain’s Avengers #89 lead-in to the early-’70s Kree-Skrull War, while Binary reproduces the 10-years-later Uncanny X-Men #164 conversion of the then-depowered Carol Danvers into a cosmic heroine.  Earth’s Mightiest Hero is the most recent, from 2012, and also the most important: it’s Carol taking on the Captain Marvel name, and 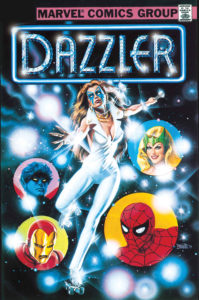 launching the series that most influenced the upcoming movie, courtesy of Kelly Sue DeConnick’s smart and inspiring characterization, and a couple of heroic splash pages from Dexter Soy.  Dazzler #1’s a “Facsimile Edition,” which means that, except for the now-$3.99 cover price, it’s exactly like the original Dazzler direct-market debut from 1980 (including the ads — check out the 40-year-old back-issue prices in the double-page centerfold one from Mile High Comics), complete with art from a young John Romita Jr. and Tom Defalco doing his best Stan Lee snappy-dialogue impressions. 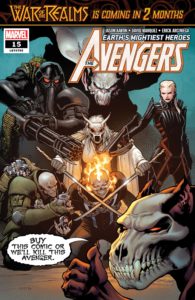 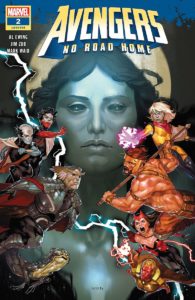 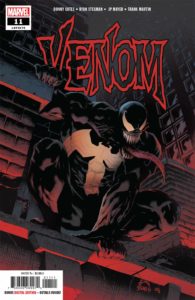 The regular Avengers sees a vampire civil war, with the superheroes caught in the middle — and Robbie Reyes, the 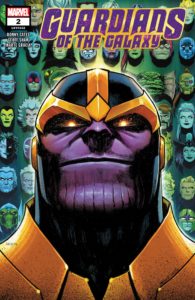 supernatural Ghost Rider, mystically compelled to help the bad guys; his powers get some visually-cool workouts courtesy of David Marquez and colorist Erick Arciniega.  At the same time, there’s the weekly ten-part No Road Home serial, also considered part of the main title (the regular book is on Legacy #705, while the extra series is taking up #s 708-717, even as it’s coming out at the same time). That one’s a cosmic slugfest with the new character Nyx, Mother of Night, who’s already brought darkness to the universe and killed the Olympian gods. The 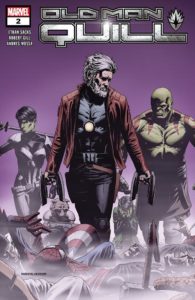 every-seven-days format lets the creative team craft a sprawling, dozens-of-characters action tale without fearing that readers will lose the thread; it worked well with last year’s Avengers: No Surrender, and looks to be doing the same here, too. Rising fan-favorite writer Donny Cates has two books out: Venom continues his run on that title since its relaunch, with Eddie Brock continuing to get startling revelations about both his symbiote and his human family, while Guardians of the Galaxy sees a crew of old (Star-Lord, Groot) and new

(Cosmic Ghost Rider, Moondragon, Beta Ray Bill) chasing after a potentially-resurrecting Thanos; both comics have the combination of fast-moving plots, multiple interesting characters and didn’t-think-of-that reversals that have been a hallmark of his writing. The mini-series Old Man Quill takes after, of course, Old Man Logan and Old Man Hawkeye, and is set in the same alternate universe; it might as well be called Old Men Guardians of the Galaxy, because the whole crew is with the former Star Lord as he travels to that version of 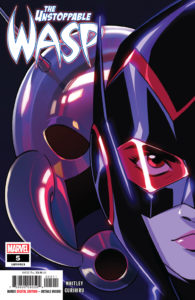 Earth and discovers that the bad guys killed the heroes and took over decades ago.  Miles Morales: Spider-Man finishes its first arc in three issues instead of the regular six, a smart move at the start of a relaunch: it guest-stars Captain America, as Miles and the Rhino try to track down who’s kidnapping local kids and giving them powers. Saladin Ahmed gets Cap, Miles and the Rhino all right (and partly rehabilitates the latter, as he did for the Absorbing Man over in his Black Bolt series last year), and this first Miles series without his creator, Brian Bendis, seems to be in good hands. 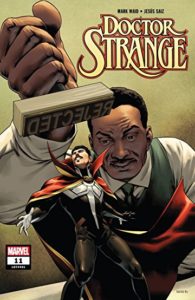 Unstoppable Wasp completes a two-part story where, after a battle, Nadia feels guilty and spirals into mental issues, discovering that she, like her father Hank Pym, is bipolar. This could have been a syrupy after-school special episode, but thankfully the creative team, especially writer Jeremy Whitley, has both done their research and kept the focus on the characters, not the illness, and the result shows why this comic’s a welcome addition to Marvel’s stable of YA books. Doctor Strange ends an arc, too, involving the costs of magic as being audited by cosmic accountants; it’s also got the return of the Ancient One, and plenty of character-rich continuity, courtesy of longtime writer Mark Waid. 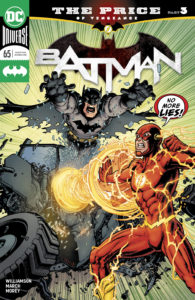 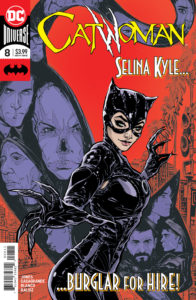 Batman‘s got part three of a four-part Flash crossover scripted by that title’s writer, Joshua Williamson, but using

characters — especially Gotham Girl — from Tom King’s ongoing mega-run: so it “counts,” instead of being a fill-in, and fans of both titles should like it. Bruce Wayne’s almost-other-half, Catwoman, features the second part of a new arc in her own book; it’s only written, not drawn, by Joelle Jones, but the substitute team of Elena Casagrande and Fernando Blanco brings shadowy, detailed and sometimes very pretty graphics to Selina, who’s had her share of top artists during her career.  Aquaman 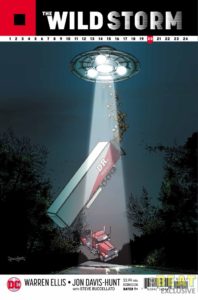 continues its he’s-got-amnesia tale by Kelly Sue DeConnick; she demonstrates her writing skills not only by combining poetic, evocative mythology with the action, but by giving illustrator Robson Rocha a couple of opportunities to show what he can do with full-page seascapes — and he acquits himself nicely. The Wild Storm, Warren Ellis and Jon Davis-Hunt’s two-year refurbishing of the Wildstorm universe, heats up its last chapters with 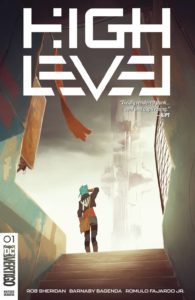 Stormwatch and I.O. on the verge of going to war with each other; that gives the new versions of Apollo and Midnighter a chance to show why it’s a very bad idea for an army unit, even a high-tech one, to try to take over a town they’re protecting. High Level is a new Vertigo sf title, set in one of those societies where the rich live up in the air and everybody else slogs it out in the earth-bound slums; the heroine’s a mercenary illegal-cargo transporter with punk sensibilities, and the world-building and design work are good enough to make the reader catch a few more issues to see where the story’s going from here. 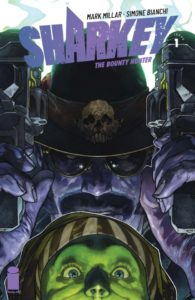 Sharkey the Bounty Hunter is new Mark Millar; it’s the amoral-galactic-gadabout-with-a-heart-of-gold bit that he does so crowd-pleasingly, and it’s not an accident that it’s 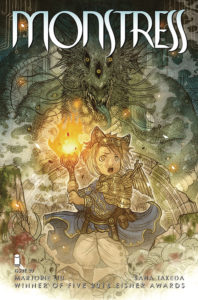 part of his comic/property-development deal with Netflix, or that there’s already a movie script in production, or that he got yet another high-level artist, Simone Bianchi, to collaborate with him — success, after all, breeds success, and Millar has become his own cottage industry.  Monstress keeps coming out with beautiful art by Sana Takeda and a well-realized epic-fantasy magical world by Marjorie Liu; the cover mentions the five Eisner awards it picked up at the San Diego Comic-Com last year, so at least flip through it to see what the fuss is about, and then when 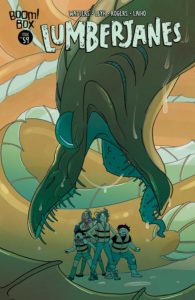 you’re impressed get started with the first of the three trade collections available.  Lumberjanes is about to reach its fifth anniversary next month; how does a cartoonishly-drawn book about pseudo-Girl Scouts at a summer camp in a magical woods last that long? By combining adventure, humor, appealing characters, and themes of friendship, brains and tolerance into addictive stories that have spawned a dozen trade collections; you don’t have to be in its target audience of adolescent girls to enjoy it, but if you have anyone like that on your shopping list both the comics and the collections would make a wonderful gift for them….

With 40 years of experience in comic reading, collecting and reviewing, English Professor Phil Mateer has an encyclopedic mind for comics. Feel free to ask Phil about storylines, characters, artists or for that matter, any comic book trivia. He will post your questions and answers on the AABC blog. His knowledge is unparalleled! He is also our warehouse manager, so if you are looking for that hard to find comic book, ask Phil!
View all posts by Phil →
This entry was posted in New Comics, Reviews and tagged Aquaman, Avengers, Batman, Captain Marvel, Catwoman, Dazzler, Doctor Strange, Guardians of the Galaxy, Hulkverines, Love Romances, Lumberjanes, Miles Morales, Monstress, Nightcrawler, Old Man Quill, Sharkey the Bounty Hunter, Spider-man, The Wild Storm, Venom, Wasp, Wolverine, X-men. Bookmark the permalink.