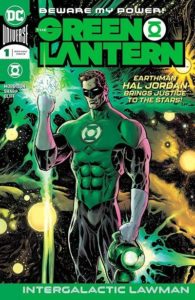 The biggest news this week is Grant Morrison’s return to DC with his new ongoing Green Lantern;  it’s crammed with energy and activity, with a propulsive forward motion based on a back-to-basics concept: Hal Jordan as a space 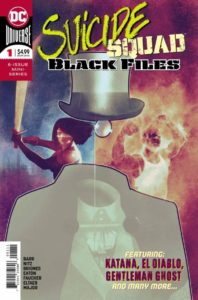 cop with a magic ring; we start with an alien-filled prequel (one that harks back to Morrison and artist Liam Sharp’s beginnings on British weeklies like 2000 A.D. — a connection that becomes even stronger later, when one of the Guardians declares, Judge Dredd-like, “We are the law!”), and then catch up with Hal on Earth. Any more plot descriptions are unnecessary; just jump on, and be prepared for an intricate roller-coaster ride with plenty of fun for newcomers and lots of deep-continuity nods for veterans.  Morrison’s also the writer over in Sideways 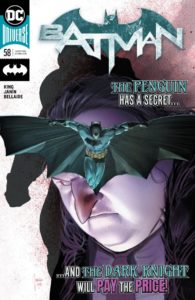 Annual #1, wherein that rift-opening, sometimes dimension-traveling young hero teams up with the “S”-T-shirt-and-jeans-wearing New-52 Superman from Morrison’s Action Comics run; it’s also got the Seven Soldiers of Victory (the ones from Morrison’s 2005 event/mini-series), so if you’re a fan  — and why not? — it’s an easy sale.  Suicide Squad: Black Files is an anthology mini-series spotlighting various Squad members: a 20-page Katana story by her creator, Mike W. Barr, and Philippe Briones, followed by an El Diablo/Gentleman Ghost pairing that eventually connects 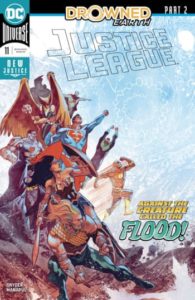 to a new Suicide Squad Black team, by Jai Nitz, Scot Eaton and Wayne Faucher. There’s a lot here that will link to the main Suicide Squad title, and you’re getting the equivalent of two new comics for $4.99, so, assuming you’re a Squad fan, it’s another good deal.  Over in Batman, there’s a Penguin spotlight and kind-of team-up; it’s by the regular Tom King/Mikel Janin team, so, considering this book is DC’s best-selling regular title, you’ll probably want it too.  Justice League is the second part of the Drowned Earth crossover mini-series, an Aquaman-centric tale about godlike space aliens coming to take over Earth’s 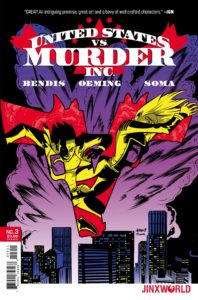 oceans; like Batman, it’s by its regular team:  Scott Snyder/Francis Manapul; and, since they’ve made it DC’s second-bestselling regular title… well, you know.  Most DC weeks now have one of Brian Bendis’s Jinxworld-imprint books too; this week’s, United States Vs. Murder, Inc., imagines that the 1950s/’60s-era Mafia, instead of being stopped by the authorities, expanded their control of areas like the East Coast and Las Vegas, and reached an uneasy standoff with the government; it’s worth a look because Bendis and Michael Avon Oeming’s love for classic mobster-movie dialogue, plot flourishes and bloody action comes through so clearly and entertainingly. 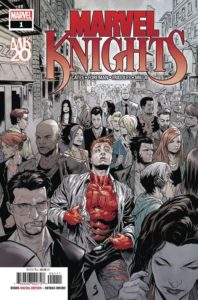 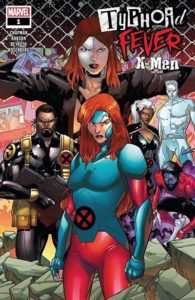 know why he’s there, or even who he is. Then a uniformed policeman comes up, and it turns out his name is Frank Castle — and we’re off.  Donny Cates, as always, supplies a kinetic and twisty narrative, and by the end of the first issue there are two cliffhanger reveals, one of the main bad guy and one of… someone else close to DD. The art’s a good match for the story — Foreman’s got a clear, simple style with some manga influences, and he gets to show off on a couple of decent splash pages, too; this looks like it will be deservedly popular.  Typhoid Fever: X-Men is the middle of a trilogy (it follows Typhoid Mary: Spider-Man and leads into Typhoid Mary: Avengers) with that multiple-personalitied  pyrokinetic/psychic/telekinetic antagonist getting a power boost and threatening to 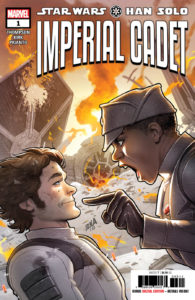 put all the heroes under her spell while burning NYC to ashes; the art’s a tad cartoonier than the serious plot might warrant, but it carries the action (and the large cast) along well enough, and if you like these kind of quick, self-contained super-slugfests… well, here it is. Star Wars: Hans Solo: Imperial Cadet is exactly what its title suggests, so most readers will know whether they want it with no help from me. Thompson and Kirk are a more-than-competent team; the info-dump required of a first issue doesn’t allow for many splash-page opportunities, but there’s a bookended pair on the first and last pages that are effective, and preserve the roguish humor that’s so associated with the title character. 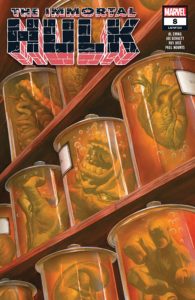 Immortal Hulk continues to be a smart, creepy take on 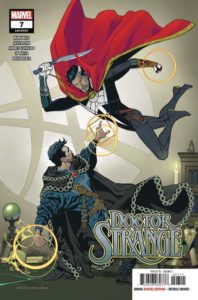 that longtime character; this issue sees him dissected and in a series of jars — see the cover, up to the right there — but still alive (that “immortal” in the title isn’t kidding), and with a smug scientist taunting him; of course, that’s going to end badly for the scientist, and in a satisfyingly horrific way. If you haven’t been reading this latest relaunch, you’re missing a very good comic; pick it up and see.  Spider-Geddon continues its multidimensional Spidey crossover, with dozens of versions of the character fighting the evil and arachno-murderous Inheritors, on multiple fronts, and 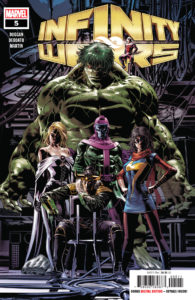 disagreeing about how medieval to get on them — hence, the faceoff cover. If you’re any kind of fan of the Spider-verse, this will be a lot of fun for you.  Doctor Strange is ramping up to its anniversary 400th issue in a few months, and Doc is currently fighting a powerful, damaged and pissed-off former apprentice who’s taken his form and been corrupted by his earliest arch-enemy.  Who? No spoilers, although since Strange has maybe a three-character rogue’s gallery the last-page reveal won’t come as too much of a surprise; old pro Mark Waid at the wheel makes it likely that the next few issues

to be good ones. Infinity Wars reaches its penultimate issue, with a lot of plates spinning as everyone’s chasing after the Infinity Stones and they keep switching hands; artist Mike Deodato Jr. handles all of the crosscutting action, and dozens of characters, easily and well, and continues to be the biggest reason to buy the book.  Death of the Inhumans reaches its end with, no surprise, almost all of the core Royal Family intact, but lots of subsidiary characters and general undergrowth cleared out; readers will  be a mixture of relieved and disappointed at that, depending on their view of the title group, but the series itself has been a well-told journey, thanks to Donny 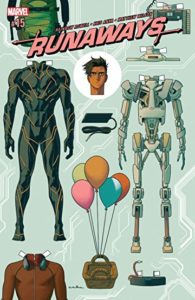 Cates (again) and Ariel Olivetti, whose shadow-tinged art has been a good match for the grim-but-entertaining goings-on.  Runaways has drama, too, but there’s a light-heartedness at its center that makes it work; we feel like we’re in good creative hands, and that despite all the trials the characters go through, they’ll come out OK at the end. This issue spotlights Nico, the spellcaster, and her magical staff, which turns out to be considerably more than it seems; the resolution to that solves a couple of plotting snags, sets up a future conflict or two, and confirms her basically-heroic character: not bad for 20 pages, and a good example of the book’s many charms. 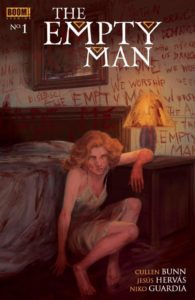 The Wicked and the Divine: The Funnies #1 (of 1) — Creators: Various

The Empty Man is a horror comic about a mental disease that’s, somehow, contagious, wherein victims hear/sense the title character whispering to them, and they end up committing acts of violence/spree killings/suicide pacts/etc.; is it scientifically based? Occult? Some combination? No one’s sure, but it’s starting to look depressingly 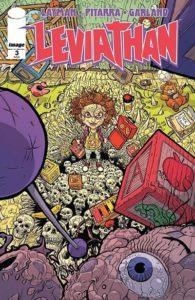 apocalyptic…. Cullen Bunn (Sixth Gun; Harrow County; tons of Marvel and DC books) first visited this world in a 2014 mini-series that was optioned for a movie (which has been completed but not yet released); for this sequel, artist Jesus Hervas has a detailed, ink-drenched style that illustrates the creeping dread of the script well. Two books out this week are by John (Chew) Layman; Outer Darkness, the debut, is an sf/horror mashup that imagines space as being full of supernatural entities (ships are powered by captured elder gods who run on blood sacrifices; crew are subject to possession and worse during 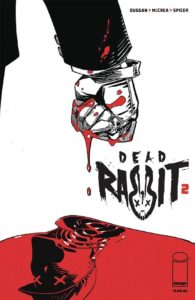 flights, etc.).  The main character, a once-disgraced captain now scrabbling for work, is an expert on navigating those troubled terrains, and takes a commission to a far-off quadrant where he lost a loved one long ago; imagine Star Trek as written by H.P. Lovecraft. Leviathan, also by Layman, is a giant-monster mini-series that involves a beast summoned from the depths of the earth by magic, and what happens as it rampages through New York City; it’s distinguished by artist Nick Pitarra’s Geof Darrow-level detail and layouts, and they’re put to very good use here, especially in a showcase double-page 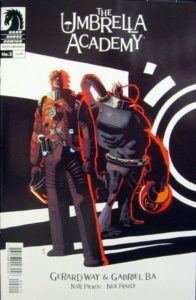 monster splash in the middle of the book. Dead Rabbit is about a costumed mercenary/thief by that name who made one final big score decades ago and retired; now, his wife needs expensive medical care and he has to get back in the game again — but the mob boss on whom he scored all those years ago is still around too, and wants revenge. Writer Gerry Duggan has done a lot of work for Marvel, particularly on Deadpool; this character doesn’t have the schizophrenia or mouth of Wade Wilson, but the gritty merc-world suspense comes through well, and fans of that genre should check it out. Umbrella Academy continues Gerard Way and Gabriel Ba’s weird-ass superhero title last 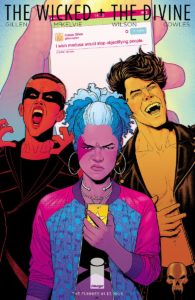 seen a decade ago; fans of Way’s Young Animals DC imprint, especially Doom Patrol, should find the weirdness and layered narrative familiar, and any occasion to see Gabriel Ba’s cool, mannered art should be celebrated. The Wicked and the Divine: The Funnies is a one-shot palate-cleanser for fans as that series is about to begin its concluding arc: a bunch of short humor pieces using the characters and world of the comic, by a variety of creators: Kieron Gillen and Jamie McKelvie, as always, but also Erica Henderson, Chip Zdarsky, Kate Leth and a dozen others. This will make little sense to you if you haven’t been reading the main title, but if you have it will make you smile.

With 40 years of experience in comic reading, collecting and reviewing, English Professor Phil Mateer has an encyclopedic mind for comics. Feel free to ask Phil about storylines, characters, artists or for that matter, any comic book trivia. He will post your questions and answers on the AABC blog. His knowledge is unparalleled! He is also our warehouse manager, so if you are looking for that hard to find comic book, ask Phil!
View all posts by Phil →
This entry was posted in New Comics, Reviews and tagged Asgardians of the Galaxy, Batman, Dead Rabbit, Doctor Strange, Empty Man, Green Lantern, Hulk, Infinity Wars, Inhumans, Justice League, Leviathan, Marvel Knights, Outer Darkness, Runaways, Sideways, Spider-Geddon, Star Wars, Suicide Squad, Umbrella Academy, Wicked and the Divine. Bookmark the permalink.