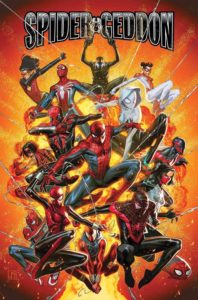 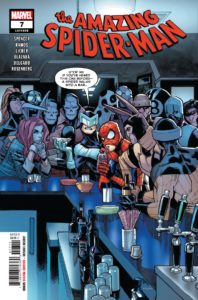 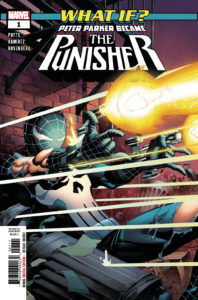 If you liked the Spider-Verse mini-series/event from a couple of years ago, you’ll probably like Spider-Geddon, because it’s the same story: the same protagonists from before escape their prison planet, and a bunch of alternate-universe versions of Spider-Man have to team up and stop them. Fortunately, writer Christos Gage has been around enough arachno-stories to know how to mix and 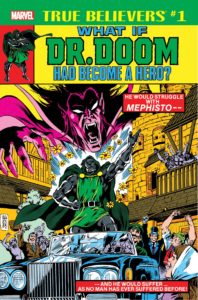 match all the different iterations, from Spider-Ham to Spider-Gwen to two different Spider-Octopi, and the result looks like it should be fun.  Meanwhile, in Amazing Spider-Man,  Peter’s ended up at a super-villain bar with his roommate, Fred “Boomerang” Myers, and has to tangle with a bunch of “C”- and “D”-level bad guys; Humberto Ramos looks like he’s having fun, too, both with the multiple-character melee and with a later scene involving yet another 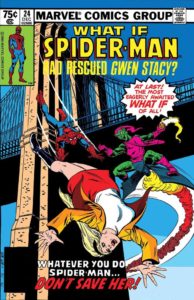 adversary, one who creeps out even the Kingpin.  October continues to be a What If? month for Marvel, as ’90s Punisher scribe Carl Potts examines a world where Peter Parker killed the guy who’d murdered his Uncle Ben, and become the Punisher; if you’re enough of a Spider-Man or Punisher fan to think that would be a cool world, this is a competent-enough working-out of that concept. The two $1 “True Believer” reprints are of the ’70s What If? #s 23 and 24; #24’s “What If Gwen Stacy Had Lived?” has a high-interest concept and Gil Kane art going for it, while #23’s “What If Doctor Doom Had Become a Hero?” … doesn’t. 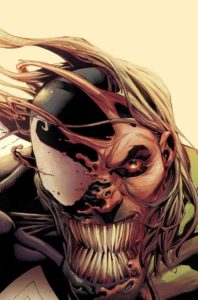 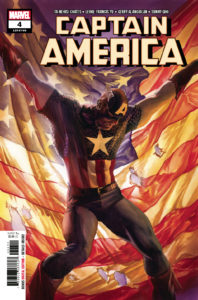 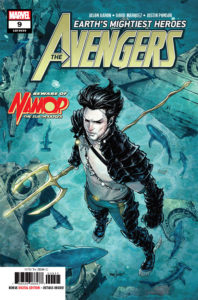 Venom has Eddie Brock, captured and with his alien symbiote out of action, getting filled in on a bunch of backstory by 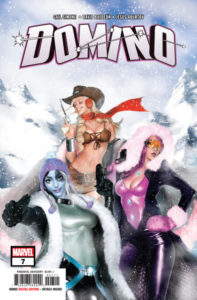 his captor; the only action is in flashback, but the backstory’s interesting enough, and after six issues of cosmic-god-avatar fighting, they’ve earned a set-up issue like this.  Captain America fights with Taskmaster while trying to rescue Sharon Carter from a vengeful Russian’s trap; there’s a also a pretty-but-somber Alex Ross cover,  some debate about why certain Americans are receptive to 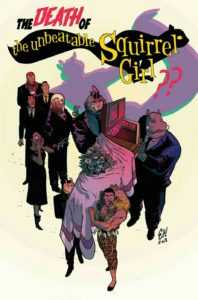 Russian-style political philosophies, and a double-cliffhanger ending.  Avengers introduces a darker, more vengeful Sub-Mariner (who proves it by killing an obscure hero, in a move so cliched that I’m hoping it’s a feint); he’s got hard-shelled black armor that makes him look like he’s wearing a leather jacket, and the Internet’s already calling him “Goth Namor,” but if you squint and move past that the story itself both looks good and reads well — and is a lead-up to the group’s 700th issue in a few weeks.  Domino, 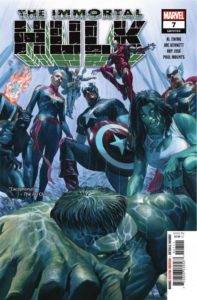 appropriately enough for an October comic, starts a new arc involving vampires; Gail Simone’s build a tightly-knit sisterhood of a supporting cast around her heroine here, and David Baldeon art makes them easy to like; the Gang Hyuk Lim cover (which you can check out, over to the left there) should persuade any fence-sitters.  The Unbeatable Squirrel Girl sees Doreen attending her own funeral, a very ’60s-ish paradox that provides a mystery to unravel, and eulogies which are more funny than touching. Its light 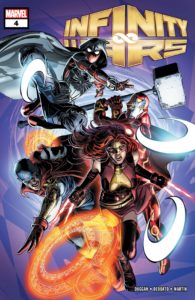 touch is counter-balanced by Immortal Hulk, which has a deadly-serious fight with the Avengers, who discover an opponent who’s  stronger, smarter, meaner and more chilling than they remember; this keeps quietly being the best of the recent Marvel relaunches, and it’s got a last page which should convince any doubters. Infinity War opens with Loki and a few allies trying to untangle the “folded” universe an Infinity Gauntlet-wielding Gamora has created; its cosmic-level events are grounded by Mike Deodato’s John Buscema-like ability to draw dozens of characters clearly, on-model, and with realistic weight on the page. 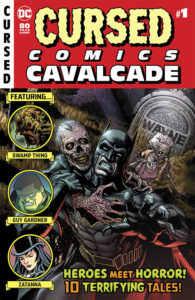 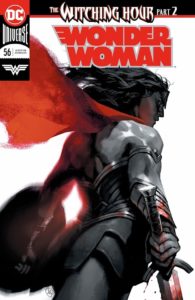 Cursed Comics Cavalcade is an 80-page, $9.99 Hallowe’en special from DC, offering ten eight-page stories; these packages live or die based on the contents, so let’s list them: Swamp Thing by Tim Seeley and Kyle Hotz (who’s channeling Bernie Wrightson) leads off, and is probably the strongest entry; it’s followed by Batman (Gary Dauberman and 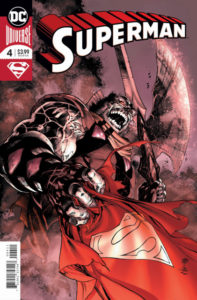 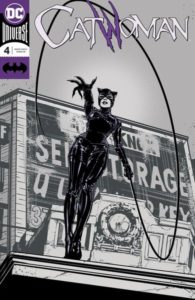 something going for them.  Wonder Woman is the second part of The Witching Hour, a five-part crossover with Justice League Dark (so before you read it pick up last week’s stand-alone first chapter); it’s got WW and the JLD seeking Circe’s help in fighting her thralldom to the ultra-magically-powerful Hecate, and leads into next week’s Justice League Dark #4.  Superman has the Earth trapped in the Phantom Zone, where Clark has to deal with Rogol Zaar and his Phantom Zone Kryptonian criminal allies, while the JLA tries to science up and get the planet back where it belongs; author Brian Bendis has made his first arc with this book a fast-moving, high-stakes roller-coaster ride (he 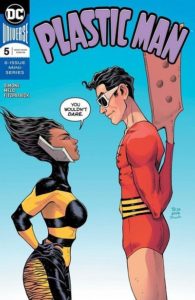 seems to be deliberately pushing back against the cliche that his books feature people standing around talking too much), and Ivan Reis offers good-looking standard-superhero theatrics to support it.  Catwoman visits her institutionalized and unresponsive sister Maggie, amid flashbacks both to an incident from their childhood, and to the Black Mask-fueled revenge that rendered her catatonic.  The Joelle Jones art remains the strongest selling point; although the flashback art by Fernando Blanco takes up over half the book, Jones writes the whole thing too, so it all hangs together well.  Plastic Man benefits from a quietly funny cover, from Gail Simone’s writing and Adriana Melo’s art (both of which walk the tightrope between 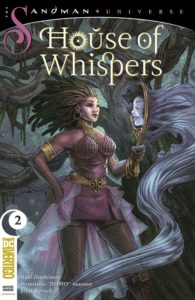 humor and drama with confidence and flair), and from being the penultimate issue, which means the action ramps up considerably, and the answers to some mysteries get revealed. The title abode in House of Whispers is inhabited by voodoo spirits and practitioners, and is supposed to be in New Orleans but has been accidentally transported to The Dreaming (right next to the Houses of Mystery and Secrets).  This issue, like the first, is mostly focused on establishing the characters and set-up; fair enough, but where it’s going, and how stylishly it gets there in the next few installments, will determine whether it can gain a foothold with readers, but so far it’s still too early to tell. 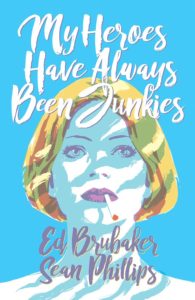 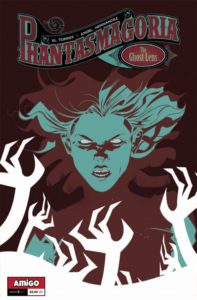 My Heroes Have Always Been Junkies is $16.99, but that gets you a 66-story-page one-shot hardcover from the two best creators of crime fiction working in comics today; look at that cover up to the left there, and realize that every page in the book looks that good, and then throw in Ed 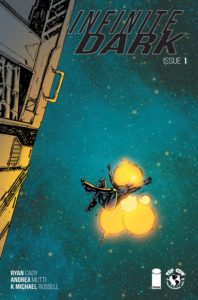 Brubaker’s classically-noirish story of addiction, romance and betrayal, and it’s absolutely worth the money. Phantasmagoria is Victorian-era occult fantasy with a Sherlock Holmes-ish protagonist (think Mark Waid’s Crossgen comic Ruse, but with more supernatural horror); it’s a decent example of that genre, although the most chilling aspect is the way the antagonist looks just like Patrick Stewart.  Infinite Dark is extinction-event sf, with a few thousand people on a space 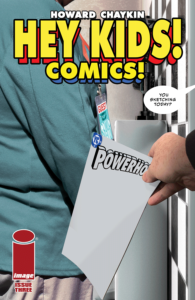 station all that remains of the entire, now-otherwise-dead universe — but, even though the title setting is all that remains outside the airlocks, something seems to be out there… as with so many first issues, there’s enough to bring readers back again, but the next few issues will determine whether they stay.  Hey Kids! Comics! continues Howard Chaykin’s gossipy, slightly-fictionalized insider’s look at the comics industry, from the 1940s until now; besides the detailed, era-specific art, a lot of fun continues 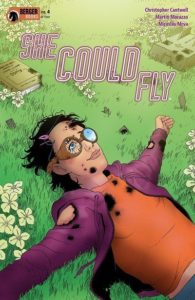 to be figuring out, say, exactly which star artist dangled a DC editor out of a window when said editor wouldn’t give him his check.  She Could Fly, a mini-series about a girl with severe OCD who gets mixed up with an on-the-run inventor of a flying harness, concludes effectively (with a long spate of extreme violence), but frustratingly, in that the one action we all expected the main character to get to take before the end of the story never happens, except metaphorically; maybe that lends itself to a theme about embracing reality over fantasy, but you know, if we wanted to do that we wouldn’t be reading comics in the first place….

With 40 years of experience in comic reading, collecting and reviewing, English Professor Phil Mateer has an encyclopedic mind for comics. Feel free to ask Phil about storylines, characters, artists or for that matter, any comic book trivia. He will post your questions and answers on the AABC blog. His knowledge is unparalleled! He is also our warehouse manager, so if you are looking for that hard to find comic book, ask Phil!
View all posts by Phil →
This entry was posted in New Comics, Reviews and tagged Avengers, Captain America, Catwoman, Cursed Comics Cavalcade, Domino, Hey Kids! Comics!, House of Whispers, Infinite Dark, Infinity Wars, My Heroes Have Always Been Junkies, Phantasmagoria, Plastic Man, Punisher, She Could Fly, Spider-Geddon, Spider-man, Squirrel Girl, Superman, Venom, What If?. Bookmark the permalink.