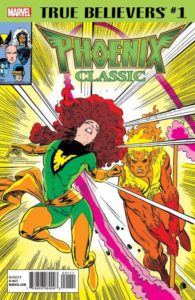 Marvel’s reviving their original Jean Grey/Marvel Girl/Phoenix character (Grant Morrison  killed her in New X-Men #150, and in such a satisfyingly-cosmic way that she’s been dead for fourteen years, an eternity in comic-book time), as if you couldn’t tell from the three only-a-buck True Believers reprints this week: Phoenix — Bizarre Adventures offers a hard-to-find Claremont/Buscema/Janson tale from the black-and-white magazine Bizarre Adventures #27, written shortly after Jean had been killed the first time, back in Uncanny X-Men #137; it’s got a scene of Jean’s sister at her grave, wrapped around a flashback memory of an earlier adventure they had, and its a good example of peak Claremont X-writing, with old pros Buscema and Janson providing solid, model-perfect superhero art. The artist’s the attraction in Phoenix — Classic, too, since it’s John Bolton; the comic showcases two of the backup stories he and Claremont provided to the reprint Classic X-Men series: from #13, a Misty Knight team-up, and from #18, a newly-cosmic Grey/Phoenix getting help 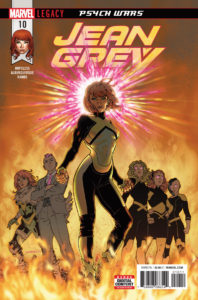 from Wolverine and Nightcrawler in dealing with her heady powers. Phoenix — Returns has Claremont’s co-creator John Byrne chronicling her 1986 resurrection (yes, she’s led a complicated life…) in Fantastic Four #286; it’s another comic with its creator at the peak of his powers and, like the others, is more than worth its 100-cent price. Finally, Jean Grey #10 is the current iteration of the character, time-tossed to the Marvel present from her teen-X-Men days, as she confronts a returned-to-Earth Phoenix Force, culminating in a scorched-earth conclusion that leads directly into next Wednesday’s weekly Phoenix: Resurrection mini-series; if you’re getting that, make sure to start here. 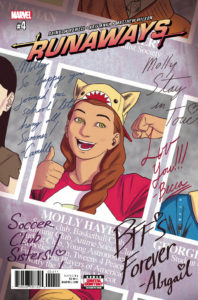 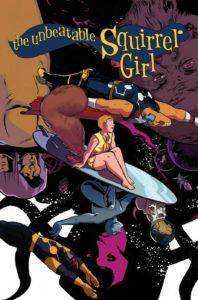 Runaways is having a pop-cultural moment, with its TV series getting good-to-great reviews (showing just how cannily-constructed the original Brian K. Vaughan series was), and the new comic reboot has been good, too, managing to keep all the characters’ tangled continuity while coming up with logical ways to scrape off the barnacles and get (most of) the original band back together; it’s a good fit for the Marvel YA line, with precise, well-colored art and an us-against-the-world tone that should sit well with its teen readers, especially.  In The 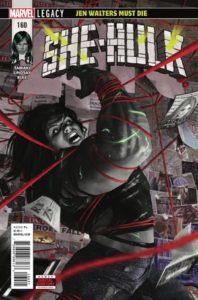 Unbeatable Squirrel Girl, Tippy and Nancy have been kidnapped by a planet of squirrels facing destruction by Galactus, and to get them back, Doreen goes to Doctor Strange’s mansion, but gets the new Sorceror Supreme, Loki, instead; since they’re old friends, though, it works — until a new complication arises…. This is, as always, told with brightness and brains and a lot of fun; the older, stodgier every-Wednesday-comics crowd may not buy it much, but their kids eat it up, and it continues to be a flagship for what attractive, tech-savvy 21st-century comics can be. She-Hulk needs more of those brighter elements; it’s been dark, with its damaged heroine and traditional-Hulk anger issues, and it still focuses too much on writing for the trade, to the detriment of the single issues (in the 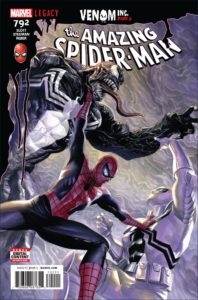 trade, you can afford to have your main character strapped to a table for 30-some pages, but giving floppy readers two issues in a row of that is pushing it). Still, there’s a good plot in there, involving old Hulks foe the Leader, and it’s been getting more confident with every issue since its relaunch, so it’s not a lost cause… yet. Amazing Spider-Man is confusing, because it starts in the middle of a story that has nothing to do with the previous issue, and at first made me think I’d somehow skipped one. Nope — it’s crossover time, with a tale that began in Venom Inc.: Alpha, and will go through the next two issues of ASM and Venom. Lots of Venom-centric stuff, with Flash becoming the new Anti-Venom and the symbiote getting peeled off from Eddie Brock — and that’s just where we are on the first page; if you don’t like symbiote-related action,

you’re not going to be happy with the next issue or two, but if you’re a fan it looks like this might lead to a consolidation/reshaping of that whole corner of the Marvel Universe.  Punisher, meanwhile, sees Frank, under assignment from Nick Fury, taking on an Eastern-European rogue state and its warlord ruler — in a stolen War Machine suit; the Clayton Crain cover gives you the idea, and in this second chapter Frank’s in-country, having deadpan conversations with the suit’s AI and figuring out its parameters as he deals with the usual nasty mercenary minions and their innocent-farmer victims. Pretty fun, if “fun” for you involves lots of explosions and a high body count. 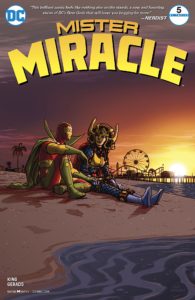 Only two DC books to note this week, but both have Jack Kirby connections, and both are great. One of Mister Miracle’s cool quirks (and, being a King/Gerads book, it has a lot of them) is the way it uses actual promo quotes from the old Kirby issues to set up or comment on the action; besides that, it’s got: a main character either mired 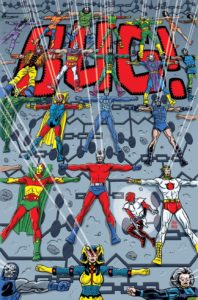 in depression or such a Zen master that it just looks that way, Funky Flashman, a looming execution, sex, a discussion of Descartes, more sex, and a quiet, almost-despairing but ultimately-uplifting love story — and it’s only on issue number five out of twelve; if I do a top ten books of the year list this year, it’s definitely going to be way up there on it. Bug! has a Kirby creation as its main character, and uses Metron, the New Gods and the Source Wall; it’s also got a lot of The King’s manic energy and cheerful cosmic resolve — plus Michael Allred’s art, which handles it all beautifully (look at that cover!), grounding it with serene, vibrant grace. 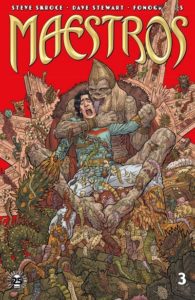 Maestros continues to look like a Mark Millar book — it’s got the usual flawed, slacker protagonist with great power, mixed with the humor, horrible behavior and crowd-pleasing twists that have worked so well for him; plus, creator Steve Scroce channels both Frank Quitely’s knack for drawing beautiful and/or evil people, and Geoff

Darrow’s obsessive need to detail every wrinkle, tooth, piece of scrap or bug: look at the cover, up to the right there, and see. As that cover indicates, things go very wrong this issue, but that just means more fun for the readers, as they try to figure out how the universe will eventually right itself for a happy ending. Slots, on the other hand,  is a noir book, so it may or may not have one of those happy endings; it’s about a roguish boxer in Las Vegas — and his son, also a boxer — and its biggest attraction is Panosian’s art, a combination of Darwyn Cooke and Mark Schultz (although, since Schultz’s big influence was always Frank Frazetta, maybe we should just say Cooke and Frazetta…), perfect for detailing all the grifters, big shots, dames, drifters and knockouts who wander through its shiny mean streets. The Wicked and the 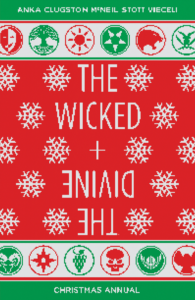 Divine gets a Christmas special, although the only thing holiday about it is that most of its seven scenes — all drawn by different artists — take place between November 2013 and January 2014: it’s meant to fill in some relationship blanks that the main story never had the time to establish, which means much of it involves various characters either having, about to have or just having had sex. The art’s by Kris Anka, Emma Vieceli, Chynna Clugstone Flores, Carla Speed McNeil and Rachael Stott, and, while people who’ve never encountered the main book would have little reason to care, it works well as a way for the comic’s co-creators, Kieron Gillen and Jamie McKelvie, to offer a present for loyal readers.

With 40 years of experience in comic reading, collecting and reviewing, English Professor Phil Mateer has an encyclopedic mind for comics. Feel free to ask Phil about storylines, characters, artists or for that matter, any comic book trivia. He will post your questions and answers on the AABC blog. His knowledge is unparalleled! He is also our warehouse manager, so if you are looking for that hard to find comic book, ask Phil!
View all posts by Phil →
This entry was posted in New Comics, Reviews and tagged Bug, Jean Grey, Maestros, Mister Miracle, Phoenix, Punisher, Runaways, She-Hulk, Slots, Spider-man, Squirrel Girl, Venom, Wicked and the Divine, X-men. Bookmark the permalink.