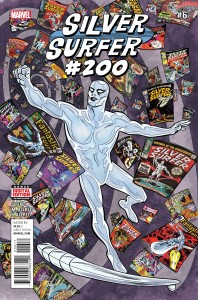 Three non-Civil War II tie-ins: Silver Surfer #200 celebrates that title’s anniversary with a 25-page episode of the regular story (with the usual Allred/Slott

combination of quirky charm and bittersweet relationship drama), plus a one-page recap, a two-page letters section, a page about the Eisner award for best single issue that the comic won last year, one of those cool double-page spreads showing the covers to all 200 issues, and a one-page preview of issue #201; for just $1 over the regular cover price, this is a sweet deal.  All-New Wolverine Annual #1 is a girl-power crossover, with Laura getting mind-swapped with Gwen “Spider-Gwen” Stacy (in a weird echo of that Wolverine-Spider-Man “Jump the Shark” Bendis Ultimate Spider-Man issue), and it’s, surprisingly, quite a bit of fun; it’s the rare Wolverine comic you wouldn’t mind showing to pre-teens (or 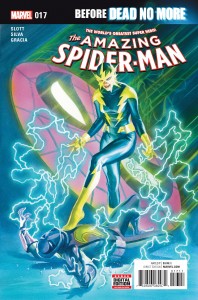 their parents). Amazing Spider-Man #17, meanwhile, seems to have gotten a pass on the whole CWII thing — it’s the second part of a story involving the Jackal, back with advanced cloning technology, that’s eventually going to lead to yet another arc where a bunch of characters who are dead will be not-dead. If you think that sounds dumb, it’s actually not — Slott’s really good at keeping the sub-plots boiling,  Parker and his supporting cast interesting, and his self-contained little corner of the Marvel universe a place worth visiting. Giuseppe Camuncoli’s been so associated with this book’s art style that it’s strange to see someone else, but guest artist Silva’s dramatic composition and clear line make a decent substitute. 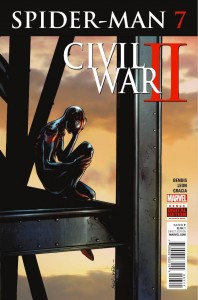 Three books that are CWII tie-ins — and since the first two are by actual CWII writer Brian Michael Bendis, they each offer a couple in-synch elaborations and asides that readers of the main series will appreciate. Spider-Man, in

between the book’s regular plot threads, has Miles trying to decide whether to step up on Tony’s side (Bombshell to Miles: Stark’s “still a rich white dude trying to get you to do something you don’t want to do,”), and ends with the appearance of two long-time Bendis characters, while Guardians of the Galaxy has the team wrapping up a couple of loose ends (like a liberated prison planet) and heading to Earth, where they encounter Carol Danvers and Alpha Flight and end up on Carol’s side… with Star-Lord giving Kitty a recap of events that’s a succinct summary of who’s done what to whom, and why, and the name “Thanos” coming up quite a bit; GOTG also

continues to benefit from Arthur Adams’s striking covers (as always, click on the thumbnails to see a larger version). Ms. Marvel #10 has a conflicted Kamala, torn between the “good guy” aspects of the proactive strike force she’s leading (based on the Ulysses profiling) and the collateral damage that’s being caused, especially to one of her best friends. It’s a gentle, sure-footed attempt to make all the philosophical issues clear and relatable, with the regular combination of accessible art, action and ongoing sub-plotting mixed in too; there’s a reason this book has gathered a number of awards during its relatively-brief life. 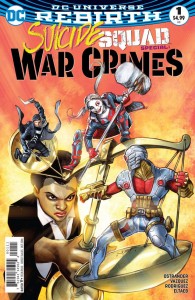 With five weeks in August, this was a skip week for most of the main ongoing DC books, but a couple of special issues fill in the gap: Suicide Squad Special: War Crimes has the “Rebirth” tag, but it’s basically an annual-sized story by the group’s original ’80s/’90s writer, John Ostrander. If you’ve read that incarnation, it’s nice to see his versions of the main characters again — especially of Amanda Waller, who’s come full circle from her

slimmed-down, partly-sanitized New-52 version through her Viola Davis portrayal in the movie and back to the take-no-crap, shoot-first, plus-size ball of fire that she was to begin with. The plot is typical black-ops stuff, involving a group of foreign terrorists who kidnap a former US Secretary of State to put on trial for the “war crimes” of the title, based on his advocacy of an ill-conceived Middle-East war that made both him and his private-security-company friends a lot of money (the political position and appearance are different, but the resemblance between “George Carmody” and “Dick Cheney” isn’t likely to be a coincidence), and then the usual Suicide Squad rescue mission goes south and ends in blood; as a stand-along feature-length story, it’s entertaining, in its cynical, depressing way.  Bombshells offers a stand-along annual too, focusing on its own alternate-universe, WWII-era version of Amanda Waller, and mixing Barbara Gordon, Croc, The Enchantress and others with elements of haunted bayous, witches’ covens and vampire Batgirls to culminate in the formation of yet another wartime black-ops group with a very familiar name. Add in the tricky, well-stuffed script by Bennett, and the

animation-friendly art by Charrettier (who mixes in a little of Bruce Timm and a lot of Darwyn Cooke among her influences), and the result is a classic annual, and a good solo sampler for readers who’ve never picked up this title. That leaves Gotham Academy Annual, which offers its typical special-issue mix of indy artists (including The Woods‘ Michael Dialynas and Porcelain‘s Chris Wildgoose) with regular illustrators Adam Archer and Msassyk to cover a full-on Gothic plot involving its group of plucky students battling time-traveling glowing skeletons and a vampire infestation; as with Bombshells, it’s a chance to get a more-than-full-length, stand-along story of a pretty cool little comic that you might never notice otherwise. 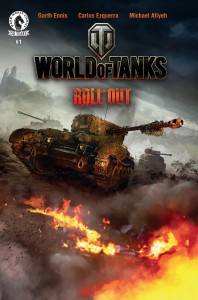 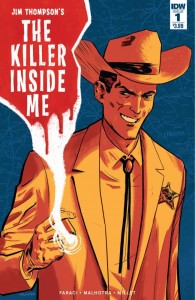 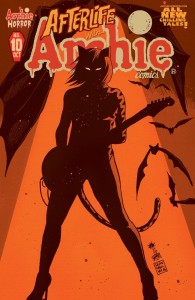 Lots of decent indy books this week — and a good reason to check them out, if you’re a DC fan with only a few books to buy and some money left over.  World of Tanks is another Garth Ennis war book, like Battlefields, except that he’s paired with longtime collaborator Carlos Ezquerra (Just a Pilgrim and Adventures in the Rifle Brigade, among others), about a British tank crew in Normandy on D-Day, untested in war and encountering a

much more experienced and world-weary German Panzer squad. Ennis, as always, makes both groups of soldiers human and understandable, and the research on display here in both story and art, plus the gritty drama,  should make any war-comic fan happy.  The Killer Inside Me is an adaptation of the ’50s pulp-paperback novel by Jim Thompson; it boasts a five-page afterward from no less a writer than Stephen King, singing its praises (“an American classic”) as a hard-boiled good-‘ol-boy suspense thriller, the kind of casually-violent, everyone-at-cross-purposes thing the Coen brothers were after in Blood Simple; Vic Malhotra’s 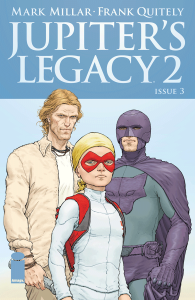 art is just the right combination of scruffy and lurid to be a good match for it.  Afterlife With Archie has had a spotty production record lately — all of three issues have been published in the last sixteen months — and this episode doesn’t even move the main story along, focusing instead on Josie and the Pussycats, who turn out to have been harboring some very dark secrets even before the zombie apocalypse. Still, the Francavilla art, all shadows and somber tones and dark corners, is irresistible, and Aguirre-Sacasa’s over-the-top trampled-innocense take on the various Riverdalians continues to be grim fun. James Bond is about halfway through its 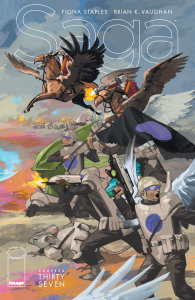 second arc, involving Bond’s agency, M16, under siege from forces both within and without of the British government, and underground steam-locomotive tunnels and a number of other Warren Ellis combinations of old-school spy mastery and modern computer espionage, with Jason Masters supplying some fluid action scenes that are often wordless, but always clear. Jupiter’s Legacy sees the slowly-growing group of ragtag rebels who are fighting against a Justice League-like takeover of America trying to talk Skyfox, the Batman avatar, into joining their side; it’s mostly info-dump, but fortunately Frank Quitely’s 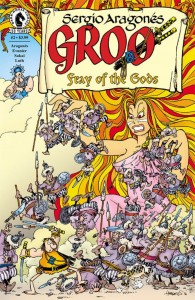 fashionable, pretty people look better standing around jawing than most other artists’ characters do in full-on action, so it’s a tolerable chapter leading to, one assumes, much more high-energy activity in the next issue.  Saga, after a four-month hiatus at the end of the previous arc, starts its seventh volume with a crippled ship and a landing on a comet that’s one of the focal points of the war between the winged and horned alien races that its star-crossed lovers are fleeing; it’s another book with more talking and set-up than action, but Fiona Staples is just as good as Frank Quitely at making it all interesting (her art’s lush and alien while his is precise 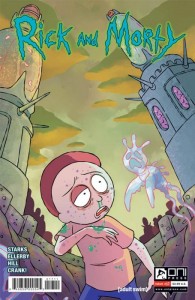 and human, but they both offer a mix of the grounded and the unearthly that you just can’t take your eyes away from), and the plot promises a lot more action soon. Groo is just as good as ever, with national treasure Sergio Aragones doing what he does best: obsessively-detailed caricature with wit and heart (imagine Conan the Barbarian as played with the dim amiability of Homer Simpson); Rick and Morty delivers wit and heart, too, but filtered through a pitch-black worldview that makes us laugh and wince at the same time: humor as a transgressive, guilty pleasure, an alternate-dimension-spanning sf version of the Three Stooges.

With 40 years of experience in comic reading, collecting and reviewing, English Professor Phil Mateer has an encyclopedic mind for comics. Feel free to ask Phil about storylines, characters, artists or for that matter, any comic book trivia. He will post your questions and answers on the AABC blog. His knowledge is unparalleled! He is also our warehouse manager, so if you are looking for that hard to find comic book, ask Phil!
View all posts by Phil →
This entry was posted in New Comics, Reviews and tagged Afterlife With Archie, Bombshells, Gotham Academy, Groo, Guardians of the Galaxy, James Bond, Jupiter's Legacy, Ms. Marvel, Rick and Morty, Saga, Silver Surfer, Spider-man, Suicide Squad, The Killer Inside Me, Wolverine, World of Tanks. Bookmark the permalink.