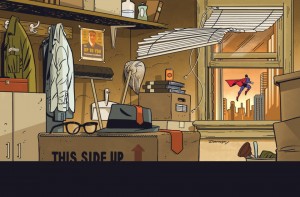 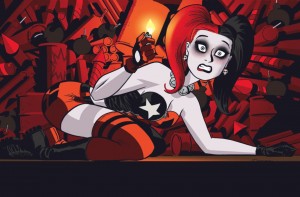 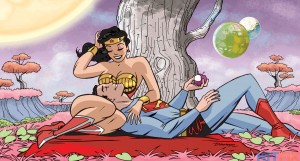 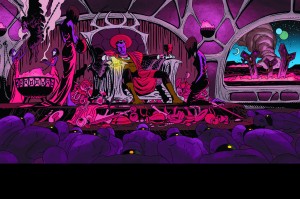 should just pay him to do all of their covers every month…): as always, if you click on the images they’ll show up much larger, so you can appreciate them even more. Of these, Superman is the only book I’d be buying anyway, and it has one of the best shots: Clark Kent, having entered a Daily Planet storeroom and changed into his alter ego, has just leaped out the window to do battle for truth, justice and the American way; it’s subtle, iconic and just about perfect. The 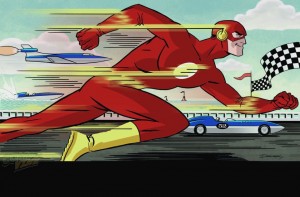 interior by Johns and Romita Jr. is the penultimate chapter of their “Ulysses” story, about a Superman-like Earth child who ended up in another dimension and gained great powers… but, as always in these situations, he isn’t quite what he seems; it’s been dependably entertaining and good-looking. Harley Quinn has been a success since its relaunch, largely because of the sly, anarchic humor that Connor and Palmiotti bring to the character; this issue finds her convincing an 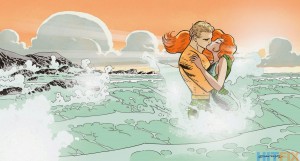 amnesiac Power Girl that they’re super-hero partners, to predictable but rude and fast-moving comedic effect. Superman/Wonder Woman has the second-nicest cover, as the two heroes enjoy a romantic picnic on an alien world.  The insides could use some of that gentle bliss, as they’re a mostly grim, fight-crammed story about yet another mysterious new hero who, no surprise, turns out to be more than he seems; the Mahnke art and last-page reveal

are the two best things about it. Sinestro has both a grim cover and interior, as it continues the “Lanterns vs. New Gods” serial that’s been bouncing around that group of comics.  If you’ve been following it, read it before this week’s Green Lantern Annual #3, which concludes that story; if not, it otherwise offers little reason to care. The Flash and Aquaman are perfectly-professional, perfectly-average stories about their characters, each one a middle chapter in a longer tale; 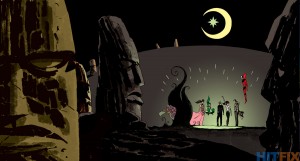 they suffer only in comparison to those Cooke covers, which do more to sum up the attraction of each hero in one image than the books’ 20 inside pages do.  So too with He-Man, which sports another iconic cover that’s much more interesting and fun than its too-many-characters, too-elaborate-a-story-for-a-kids’-cartoon insides; it could use some of the cackling, over-the-top emoting of the Skeletor of those Honda commercials. Justice League Dark does better, because its dimension-tossed characters are treated well in a typically-wise psychological thriller by DeMatteis, with some attractive layouts and splash pages by the art team (our distributor somehow forgot to send us any of the Cooke covers to this one, so click on it here to enjoy it, and hope that they scrounged up enough extra ones to get them to us by the time you read this…). 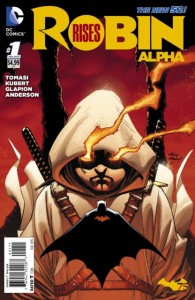 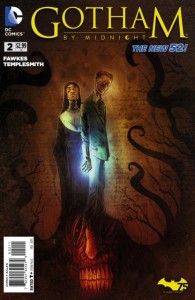 These are the rest of the more-interesting DC books for the week.  Robin Rises is a one-shot special continuing from the end of last week’s Batman and Robin, wherein Bruce Wayne’s son and partner, Damian, who was dead, gets better; it’s worth it for the Kubert art, which employs a number of large panels, and one- and two-page splashes, to very nice-looking effect. Gotham By Midnight is similarly art-driven, as the astonishing Ben Templesmith gets turned loose on an occult police procedural set in Gotham City; I can’t believe he’ll be 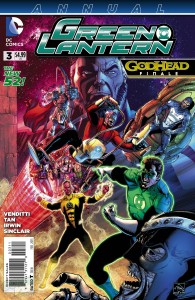 able to keep up on a monthly book, but in the meantime he’s creating some awfully pretty pictures (“pretty” in a Lovecraftian, tentacle-infested, demonic-nun sense, you understand…), and any horror fans need to check this out, just to encourage DC’s willingness to experiment. Green Lantern Annual, as I’ve already mentioned, concludes the “Godhead” serial; if you haven’t been following it, it might be worth a look, just to see how whatever new status quo it leaves for its sprawling cast of characters (the Billy Tan art makes it go down smoothly, too). 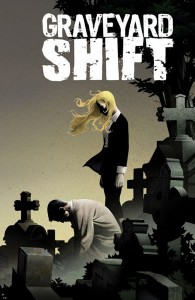 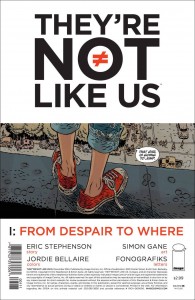 and then suffers a loss that creates an interesting conflict, and sets up readers for the next issue. They’re Not Like Us offers an effective stripped-down package: for $2.99, you get a 23-page comic that’s no ads, all story, with the cover serving as the first page. Very efficient and price-conscious, with detailed, attractive art and a story about the girl standing on the ledge on the cover, who’s being driven crazy by the voices she’s hearing inside her head. It turns out she’s psychic, and eventually runs into a group of outsiders with similar powers, who turn out to be not quite what they seem. It’s a good start, with enough twists and decent visuals to keep readers coming back for more. Meanwhile, Outcast continues its exorcist-inspired 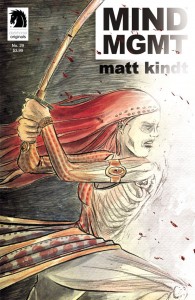 storyline, with this issue concluding its first volume; it has its by-now-typical mixture of creepy buildup punctuated by weird violence, as Kirkman has expertly introduced his main players and their opponents, and set up the larger story to come. Mind MGMT is much further along, about to enter its final arc, as its main character Meru, who started out years ago as a confused young woman, is now battling the bizarrely-powered group of mind-benders of the title as a competent and confident ass-kicker. Kindt’s unique style, in both art and story, continue to make this one of the most interesting books on the stands. 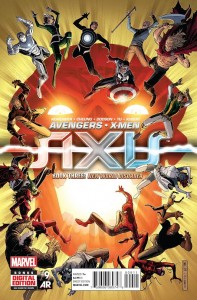 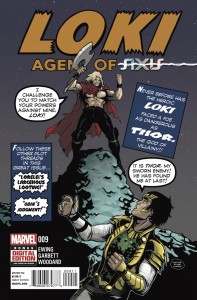 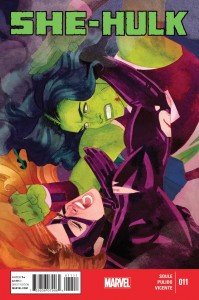 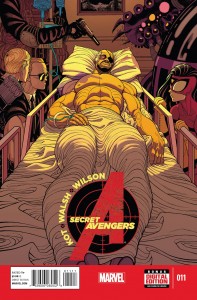 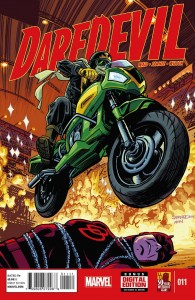 Let’s group all the Marvels at the end (so some of us can get back to Christmas break…). Axis ends its run as explosively as it began, with things not quite falling back to their normal patterns; some heroes and villains are left “inverted,” the moral opposites of their former selves. What happens to whom, and what will it mean for the ongoing Marvel universe comics? Hey, don’t depend on me to tell you; buy it and see. Loki runs parallel to Axis #9, as he fights his now-evil brother Thor on the moon, in a role reversal signaled by the Silver-Age parody cover; Ewing and 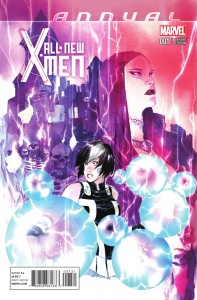 Garvett continue to make it a smart, offbeat book. So too for She-Hulk, Secret Avengers and Daredevil: all employ a crisp, minimalist art style, bright colors and savvy, character-rich scripting that’s fast becoming the modern Marvel house style, and a refreshing antidote to the grim, grey tales of too many other superhero books of the last few years. The two X-books continue Brian Michael Bendis’s confident stewardship of those characters: the annual is the second of two parts about the young mutant Eva, whose power to 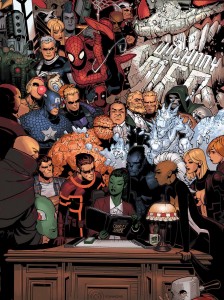 freeze time has misfired and left her stranded in various pasts and alternate futures; it’s poignant and satisfyingly complex, with some nice effects from Sorrentino’s painterly art. The regular Uncanny X-Men title has the advantage of Chris Bachalo pencils (always worth a look), as it continues a tale about Cyclops trying to calm and reassure an over-Omega class mutant who could wish everyone into the cornfield if he wanted (that’s an aging-baby-boomer reference, but hey, they used it once in a previous issue, so…); it’s best read after the All-New X-Men Annual, since events 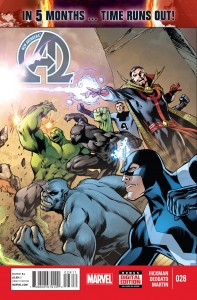 there are reflected here too. Finally, New Avengers continues Hickman’s years-long Illuminati/encroaching universes/everything but the kitchen sink story, as the Illuminati Avengers are pursued by the Steve Rogers SHIELD Avengers, with the New Avengers thrown into the mix too; there’s lots of battling and strategic shuffling, and it’s a decent amount of fun, assuming you’ve been reading it up to now and have any idea what’s happening (to their credit, Hickman, Deodato and Perkins make it interesting enough that even a confused new reader would be intrigued by it, and keep reading)… and that concludes our comics reviews for 2014, a year where the comics industry grew, kept its hold on pop culture, and produced enough good work in enough different genres to satisfy any fan. See you next year, next week, with a very short shipping list to launch 2015, as All About Books and Comics gears up for its annual New Year’s Day sale!

With 40 years of experience in comic reading, collecting and reviewing, English Professor Phil Mateer has an encyclopedic mind for comics. Feel free to ask Phil about storylines, characters, artists or for that matter, any comic book trivia. He will post your questions and answers on the AABC blog. His knowledge is unparalleled! He is also our warehouse manager, so if you are looking for that hard to find comic book, ask Phil!
View all posts by Phil →
This entry was posted in New Comics, Reviews and tagged Axis, Daredevil, Darwyn Cooke, Gotham By Midnight, Graveyard Shift, Green Lantern, Loki, Mind Mgmt, Outcast, Robin Rises, Secret Avengers, She-Hulk, They're Not Like Us, X-men. Bookmark the permalink.