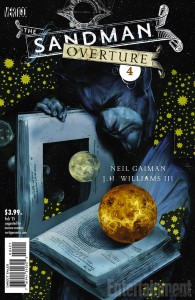 Another huge week of decent comics (Merry Christmas to us!), starting with two by Neil Gaiman. Sandman: Overture began slowly, but has built nicely, and in this issue really takes off: the J. H. Williams III art manages to pack a lot of visual information into imaginatively-laid-out pages that are like a pop-up 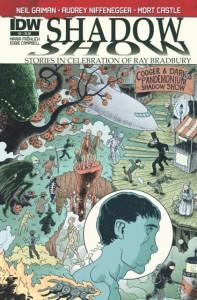 book — you could study them for hours — and yet, both they and the words manage a clear narrative, in which we enter a city of insane stars, meet Dream’s father, and end on what has to be the ultimate trap/cliffhanger; this is the first of this prequel that’s felt as rich and ground-breaking as the original series did. Shadow Show is a comics adaptation of the similarly-titled tribute book of short stories that came out after science-fiction legend Ray Bradbury’s death last year; I missed the first issue, but if it had contributors like this one (or the next, which adapts Harlan Ellison), then it should be worth searching for. 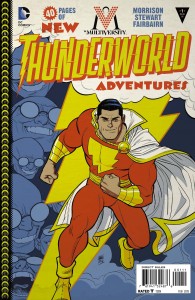 Two by Morrison: Thunderworld is his Captain Marvel tribute, with a smart, affectionate Golden Age take on those characters that even notorious curmudgeon C. C. 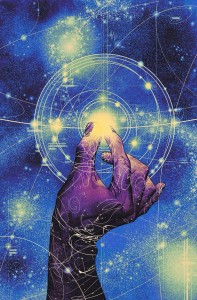 Beck might have liked, accompanied by picture-perfect Stewart art. Annihilator is its opposite, as dark as Thunderworld is sunny, continuing its story about a dying writer whose science-ficti0n screenplay about a homicidal cosmic rebel turns out to be true when the rebel shows up at his door, pursued by monsters and assassins, all drawn in Irving’s shadow-drenched, mean-street fantasy style. They’re very different books, but linked by Morrison’s slightly-skewed view of humanity, tight plotting and ability to attract talented collaborators. 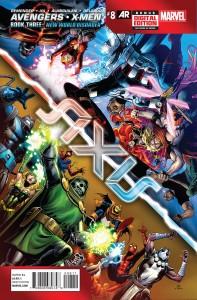 Your Avengers comics for the week: Axis has been a widescreen technicolor epic, with its flipped heroes and villains and its sprawling, world-threatening story. I’m just hoping that it wraps up cleanly in its next issue (the “switched” good and bad guys are OK as short-term plot-enhancers, but could get very old very quickly if spun out too long *cough* Forever Evil *cough*), so we can all talk 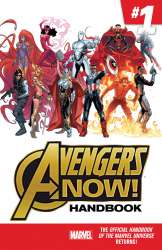 about what a good time it was and go home. The Avengers Now! Handbook is an Official Handbook of the Marvel Universe update on all things Avengers — something that, given both Remender’s mini-series here and Jonathan Hickman’s multiple-year, dozens-of-new-characters saga over in the regular Avengers titles, offers a sorely-needed scorecard/checklist/plot summary for new readers (or even confused older ones who’ve missed an issue or two, or simply have forgotten stuff that happened two years ago but now is suddenly a crucial plot point — a typical ploy by both Hickman and Remender); when just the “Avengers Update” part of the book, a simple plot summary, covers six densely-written pages, you know you can use all the help you can get. 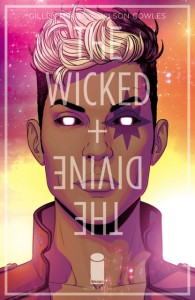 This begins the book’s second arc, so it’s more prep than action — but, after the literally head-exploding events of the previous issue, that’s probably a good thing. Go run buy the first trade collection to get caught up, and then come admire more of Gillen’s sharp character studies and McKelvie’s precise, attractive linework. 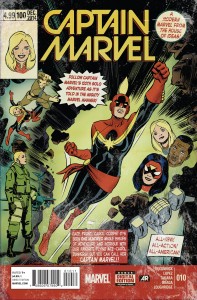 This is only the tenth issue, but it’s also the hundredth solo book featuring this character (that’s what the cover says; I assume they’re referring just to the Carol Danvers iteration, but there’s no cover gallery or checklist inside to be sure), so it’s an excuse for a $4.99 anniversary issue, with one of those artificially-aged, faux-Silver Age covers. The story inside involves Carol in space getting letters from home, which tell an interconnected story of her friends on Earth fighting against one of her foes who’s broken out of prison; it’s typically decent DeConnick, with some guest artists on the different chapters and the regularly-nice-looking Lopez art bookending it and holding everything together. CM has been one of the better relaunches this year, so this offers a good opportunity to check it out before another serial begins. 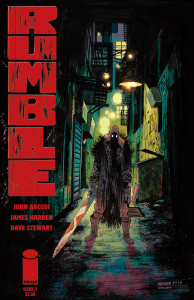 Arcudi and Harren have worked on a lot of Mike Mignola’s Hellboy/B.P.R.D. books over at Dark Horse, so this story about a slacker bartender in… New Orleans? I think it’s New Orleans… who stumbles across a magic sword and the demons chasing after it is right in their occult-monster wheelhouse. Effective art, in that Guy Davis-inspired vein that so many of the Mignolaverse books have, plus a fast-paced opening chapter make this the kind of first issue that should bring readers back for more. 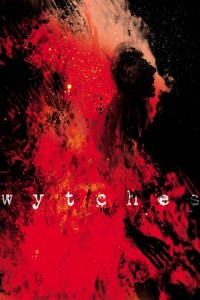 This story of a high-school girl who disappears, the creepy woods around her house, the ancient, terrible things who live there and the father who’s trying to rescue her manages to offer at least a couple of disturbing or startling images every issue; it’s been very good at holding off on many direct answers so far, instead relying on barely-glimpsed shadows and vague, half-formed fears (and making the times when we actually see something even more horrific). A couple of pages of editorial material in the back show how Jock creates the color spatters and other devices that work so well to keep the atmosphere surreal and nightmarish. 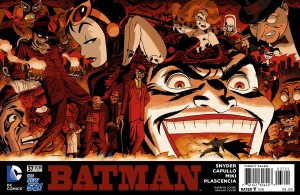 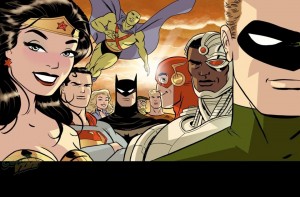 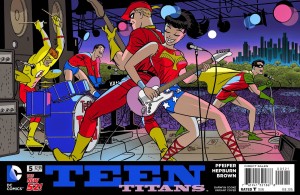 Whoa — eight Darwyn Cooke alternate-cover DCs this week (as always, click on the thumbnails here to see these in all their widescreen glory)! The 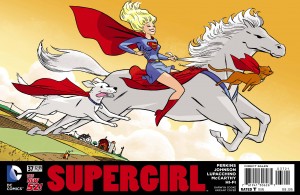 Batman and Justice League are the only ones I’d normally buy — I just mentioned Snyder’s skills re Wytches, and this book has the second installment of his “Return of the Joker” story, so it’s doubly entertaining, and creepy too — and Geoff Johns is similarly good at knowing just which plot, character and fannish buttons to push. As one-shots bought by a “new” reader, how do the others hold up? Wonder Woman, two issues into the Finch family era, is reasonably pretty, but slow-moving and depressing; it’s in the “pull down the heroine 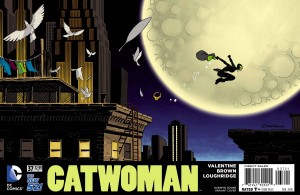 so she can climb up and win later” phase, which is understandable, but just isn’t much fun right now; there’s more high-impact action on the cover than anywhere in the book itself. Similarly, Teen Titans, although a more interesting comic (Pfeifer’s good at keeping the characters interesting and the plot moving) would be confusing to readers attracted by its shiny, energetic Silver-Age cover, since Robin’s the only 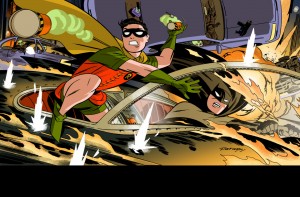 character shown there who actually appears inside the book. The same goes for Supergirl, with its dazzling Super-Pets cover having nothing to do with the book’s interior; fortunately, the plot, involving Kara at the Crucible, a cosmic training school for “the strongest members of every species in the universe,” is interesting and has a certain breezy Silver-Age flash to it. Catwoman is similar, in that the jewel-thief cover 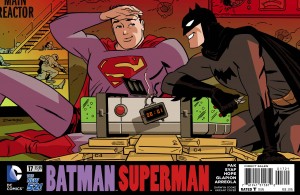 disconnects with the Selina who’s a new boss of Gotham City’s underworld on the inside — but, again, that setup is intriguing enough to get new readers attracted by Cooke to maybe buy another issue or two of the comic. Batman and Robin has the same disconnect, since the live Dick Grayson Robin cover is contradicted by the dead Damian Robin inside — but, then, this issue is the climax of the “Robin Rises” serial, so things change in a big way by the end of the book, and pay off well for curious readers. Batman and Superman is on the second chapter of a long arc about “Superman’s Joker,” as the Man of Steel is taunted by a mysterious psychotic bad guy who seems to know everything about him, and doesn’t mind threatening or killing his various friends and acquaintances; it’s another comic I wouldn’t mind revisiting in a month, to see what happens next. 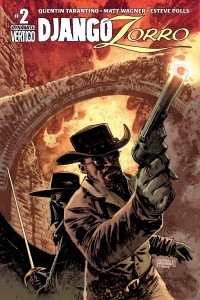 Here’s the best of the rest of this week’s books, at least 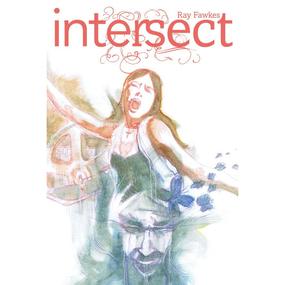 for me: Django/Zorro has been surprisingly entertaining, but with Tarantino and Wagner teaming up on the writing, that’s no surprise; Polls does a decent-enough job on the art to keep up with his star-studded scripters. Lumberjanes is a one-off story, after the eight-episode opening 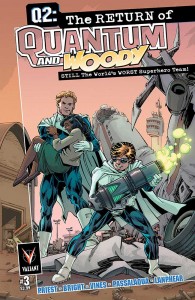 arc for the book, as the girls sit around a campfire telling ghost stories (and giving a number of rising women artists the chance to show their stuff on each tale); it’s a good example of the pleasures of this comic. Intersect‘s second issue is a little more linear than its first, as it continues to follow its two protagonists while they fight through the fractured city of Detroit, where something very 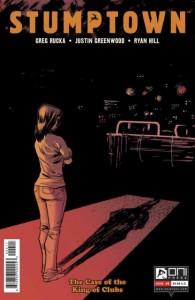 hallucinatory and bad has happened to its citizens; it takes some lessons from Mind MGMT in the way it sprinkles subtle clues throughout the text and talks directly to the reader, and fans of that book should check it out. Q2: Quantum and Woody continues Priest and Bright’s return to their critically-acclaimed (as in, not that many people bought it, although the numbers it got then would probably be considered stellar today) ’90s superhero comedy/drama; it’s got much to recommend it, including its heroes now being as middle-aged as its 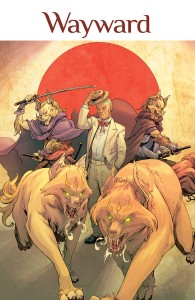 creators, and it’s been a pleasure to spend some time with these people again. Stumptown continues its Portland-woman-P.I. plot, as gritty and readable as ever, while Wayward, about a teen girl who’s been raised in America by her father, then comes to Tokyo to live with her Japanese mother and encounters a number of supernatural/occult creatures (and starts to demonstrate powers herself) is, at this fifth issue, at the reveal-the-real-plot stage, and it’s grown into an interesting, action-filled story that looks like it might stick around a while: an encouraging book to end the week (and, almost, the year) on.

With 40 years of experience in comic reading, collecting and reviewing, English Professor Phil Mateer has an encyclopedic mind for comics. Feel free to ask Phil about storylines, characters, artists or for that matter, any comic book trivia. He will post your questions and answers on the AABC blog. His knowledge is unparalleled! He is also our warehouse manager, so if you are looking for that hard to find comic book, ask Phil!
View all posts by Phil →
This entry was posted in New Comics, Reviews and tagged Annihilator, Axis, Captain Marvel, Darwyn Cooke, Lumberjanes, Quantum and Woody, Rumble, Sandman, Stumptown, Thunderworld, Wayward, Wicked and the Divine, Wytches. Bookmark the permalink.