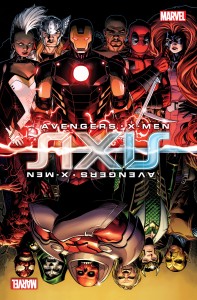 Captain America and the Mighty Avengers #1 — 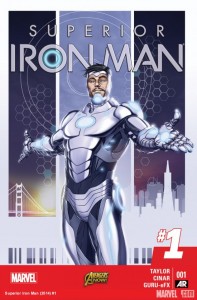 These books are all related, so let’s look at them together: Axis is growing as it goes; what was originally a fight-the-Red-Skull story has now morphed into a role-reversal one, as the heroes and villains who were subject to the Skull’s mental onslaught have now started to swap personalities, with the heroes getting more self-centered, amoral and villain-y, and the villains getting more altruistic. This leads to developments like the X-Men partnering with Apocalypse to take over New York City, while the Bad Avengers conspire to 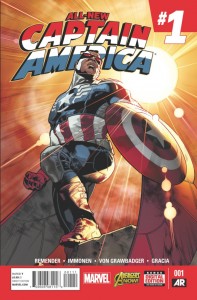 capture and immobilize all of their super-rivals. It also means that Tony Stark is now even more of a dick than he was before, leading to Superior Iron Man: he’s relocated to San Francisco, started drinking again, and is the very model of a modern corporate pirate, a Koch brother with high-tech snake-oil to sell. This is actually kind of fun, playing off of tendencies the character’s always had (especially in the movies) that were kept in check back when he was idealistic and moral; now, not so much. So too for Captain America and the Mighty Avengers #1, wherein Sam Wilson’s changes involve him becoming more right-wing and law-and-order, with no sympathy for criminal scum, 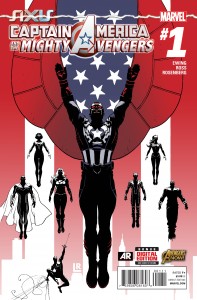 most of whom deserve to die anyway; this leads him to partner up with Tony to take down anyone who might stand in the way of his new get-tough policies… like, say, Luke Cage’s Mighty Avengers. How long both of these series can continue down their the-hero’s-a-jerk paths is a good question (it worked in Superior Spider-Man because Ock was a bad guy trying desperately to be a good guy, not the other way around), but as long as the conceit doesn’t last for more than a trade paperback or two’s worth of stories, it should be OK.  Interestingly, All-New Captain America #1 doesn’t show the fascist side of the new Cap; Sam Wilson’s still normal in that one, and the book is mostly just a continuation of plotlines and characters from the previous Captain America book, only with Wilson in the costume now instead. That’s fine, though: Remender had been writing that comic since its revival, and was good at it, so keeping the same writer should help to retain current fans while welcoming newer readers attracted by the character-change publicity. 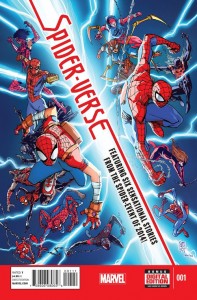 A tie-in issue to Marvel’s other sustained event right now, with six different stories about alternate-universe Spideys. Dan Slott and Humberto Ramos provide the intro, while Skottie Young and Jane Parker do the Mangaverse Peter Parker; Robbie Thompson and Denis Medri offer a female Victorian steampunk version; and Katie Cook looks at a gender-reversed world where it was Penelope, not Peter, Parker who got bit. What really makes the book are the two knockoff extras: Slott and Ty Templeton on what happens when Morlun encounters the Hostess Twinkie ad Spider-Man world, and Slott and Tom Grummett depicting his visit to the Spider-Man newspaper comic strip universe (where time moves verrrry slowly, and everyone keeps repeating themselves in the first panel of each new installment). The goofy fun part works surprisingly well mixed with the more serious band-together-before-we-all-die part (like teaming Peter Porker and the grim Spider-Man Noir version in last week’s tie-in), and is a good example of the charms of this concept; it could get old quickly, but two issues of these smaller tales seems just about right. 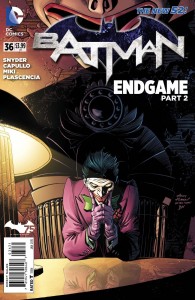 Two Bat-titles: very different, but both doing well in their own ways. Batman has been the top-selling regular comic title pretty consistently for the last three years, thanks to its dependable Snyder/Capullo team, and this issue, featuring a 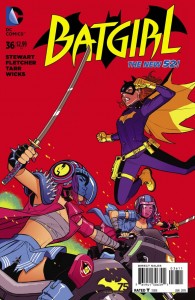 return of the Joker (with the first third of the book involving an all-out war between Batman and a Joker-venom-crazed Superman) should put the book even more firmly on top. Batgirl has the buzz of the new: a different take on the character, with a manga style, Barbara one of a group of appealingly bright and savvy 20-something career women finding their way in the big city, and a casually tech-and-social-media-smart tone that should make the book a top digital seller. 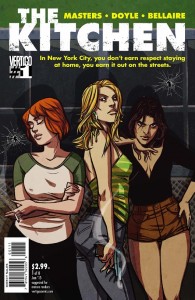 No, this isn’t a Vertigo book about a cooking show; the “kitchen” in the title is Hell’s Kitchen, and it’s a crime story about three protection-racket hoods who end up in prison, and how their wives try to keep the family business going in their absence. It’s the kind of thing Garth Ennis would knock off on an average day, with one realistic wife, one pampered one and one tough one, and lots of musing on what it takes to build respect and survive out on the mean streets; there’s nothing earth-shattering here, but the characters are interesting, and if you like crime books you could definitely do worse. 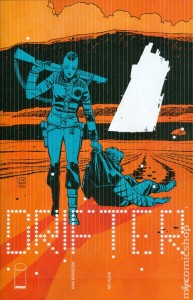 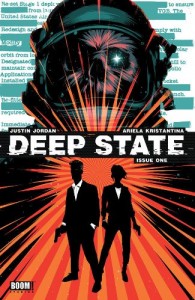 Let’s take all these indy first issues together: Drifter is a space western, with a main character who crash-lands on a sparsely-inhabited planet, and ends up being found by the local settlers, all of whom, like him, seems to have a lot of secrets. Klein gives an effective, wind-swept alienness to the landscape, and uses solid, appealing-looking figure work; the editorial material in the back suggests that a lot of world-building went onto this book, and the first issue’s interesting enough to bring readers back for more. Deep State is about a woman who gets recruited for a secretive Men-In-Black style agency that investigates weird phenomenon; there’s a real 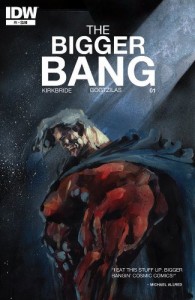 X-Files vibe to it, particularly because she’s a skeptic, and her partner/recruiter is a true believer (although in this book, he’s in on the secrets, not an outside conspiracy buff), and also because there’s a “monster of the week” plot to go along with the overarching larger story. The Bigger Bang is a cosmic/sf story about what happens when a Big Bang event occurs in an already-inhabited universe, like ours. Answer: it wipes out that universe, while creating a humanoid guy in a cape who ends up wandering the multiverse, guilty over his life having come at the expense of so many others. It’s sometimes a tad pretentious, but saved by a sly sense of humor and by the Gogtzilas art; he’s got a dense, Bill Sienkewicz-ish style that works well with the imposing central character, but also 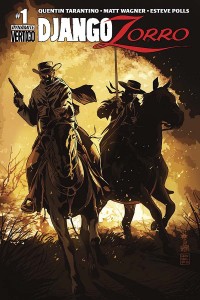 with the cartoonier alien dictator, King Thulu, who’s the antagonist, and that combination of gravity and humor helps the book’s tone considerably. Finally, there’s Django/Zorro, a book whose main team-up idea should be obvious from the title: the interesting attraction here is the writing credits: Tarentino himself, teamed with Matt Wagner, is a high-octane combination. They offer a story set in the later 1800s (there’s a reference to Phoenix, Arizona, which as we all know wasn’t given that name until 1867), with a Django a couple of decades older than in the movie, and a Don Diego who’s positively ancient — but still lively enough to hold his own in a fight. The story, as you might expect, is very smoothly done, while the art is solidly realistic and clear; Polls’s style reminds me of Gray Morrow, who was another solidly-trained realist, and this is the best-looking, and most potentially-successful, of the four comics here. 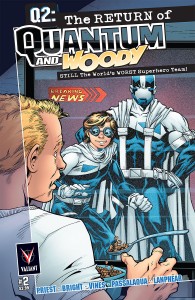 A handful of second issues: Quantum and Woody continues to be a 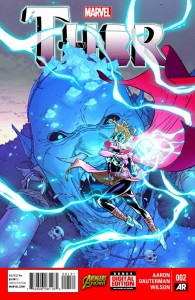 pleasure, although readers who’ve never read the ’90s incarnation might not appreciate it as much; Priest, typically for him, expects his readers to pay attention and keep up, and he’s ringing a number of sly changes on the original book’s status quo, while Bright’s art is as good-looking as ever. Thor, a book whose initial issue was a sellout and required a second printing, launches its new distaff version of its title hero into battle with Ice Giants and other, less obvious bad guys, and continues to drop clues about her civilian identity (particularly that she seems to talk in Asgardian cadence, but thinks in Earth slang); it’s 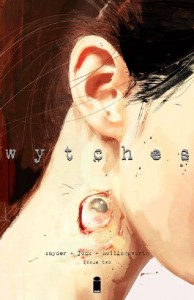 action-packed and fun, and so far deserves its decent-hit status. Wytches is probably the best of the lot; it ups the creep factor considerably (which is saying a lot, considering that the first issue wasn’t exactly all rainbows and puppies), with a growing sense of dread and danger, and moody art by Jock that’s enhanced considerably by Hollingsworth’s coloring; the full-page splash that reveals the title creatures is wonderfully chilling, offering just the kind of addictive thrill that brings horror fans back for more. 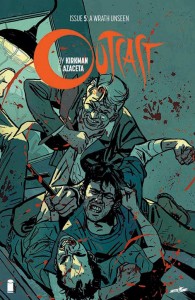 These are the best of the other creator-owned books; Outcast is as creepy as Wytches, with Azaceta providing the same kind of shadowy chills

(this issue involves a failed exorcism), and Kirkman’s story only now starting to reveal parts of the larger plot. The Fade-Out is classic hardboiled noir, with its Hollywood setting, its dead starlet, its tough-guy security guard and its cast of characters willing to sacrifice just about anything for fame and glamour; for readers tired of superhero stuff, this and Outcast offer two of the best alternatives among ongoing series right now. 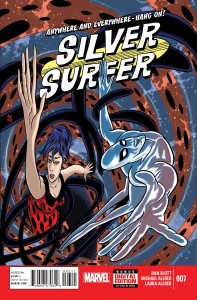 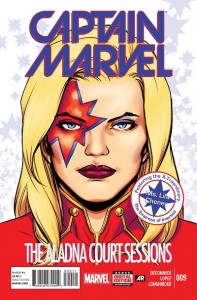 Speaking of superhero comics: these Marvel offerings all have their bright spots. Silver Surfer is a trippy space adventure (what other kind would you expect with the Allred art?), but at heart it’s actually a romantic comedy, as the Surfer explores the universe with Dawn Greenwood, his plucky-but-naive Earthgirl companion. This issue only offers ten pages of new story — the rest 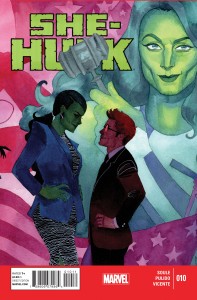 incorporates the ten-page preview of the book that was in that Marvel Now! anthology last year  — but it’s still a good example of the quirky charms of the book. Captain Marvel continues her adventures in space; this issue is a one-shot story guest-starring Lila Cheney, a space musician and teleporter who’s a member of the vast X-Men supporting cast, as she asks the Captain’s help to get out of an arranged marriage; it’s a good example of DeConnick’s clever scripting and Lopez’s careful art, and should help the book’s sales with all the new readers who might be checking it out after the news that the Captain will be starring in one of Marvel/Disney’s movies in a few years. She-Hulk is a 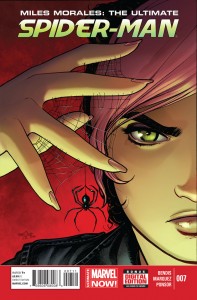 similarly clever, well-written and good-looking book (Pulido’s geometrically-precise designs and Vicente’s Dayglo coloring make it sleek and modern), but one that’s facing cancellation in a few issues. This one’s the second of a two-parter guesting Daredevil and Steve (Captain America) Rogers; pick it up to see what you’re going to be missing soon. That leaves Miles Morales…, the one Ultimate Universe book that’s any good, thanks to Bendis, who’s been scripting the adventures of these characters for almost 15 years now. With a showdown between the Green Goblin and two Spider-Men, there’s plenty of action, with a sendoff to one character and a couple of cliffhangers for Morales to deal with in the following issues, and typically-decent art. 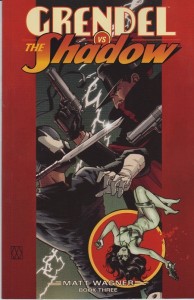 Wagner’s other current book, as he provides both script and art to this clash of unbeatable foes: the most enduring of the original pulp heroes vs Wagner’s own version of a pulp villain, Batman as a cool, murderous criminal mastermind. This is the conclusion, but buy all three: it’s an absorbing, satisfyingly dense and suspenseful entertainment.

With 40 years of experience in comic reading, collecting and reviewing, English Professor Phil Mateer has an encyclopedic mind for comics. Feel free to ask Phil about storylines, characters, artists or for that matter, any comic book trivia. He will post your questions and answers on the AABC blog. His knowledge is unparalleled! He is also our warehouse manager, so if you are looking for that hard to find comic book, ask Phil!
View all posts by Phil →
This entry was posted in New Comics, Reviews and tagged Axis, Batgirl, Batman, Bigger Bang, Captain America, Captain Marvel, Deep State, Django/Zorro, Drifter, Fade Out, Grendel vs The Shadow, Outcast, Quantum and Woody, She-Hulk, Silver Surfer, Spider-Verse, Superior Iron Man, The Kitchen, Thor, Wytches. Bookmark the permalink.