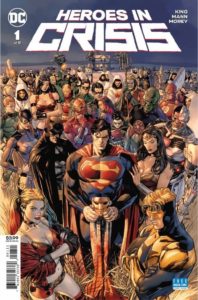 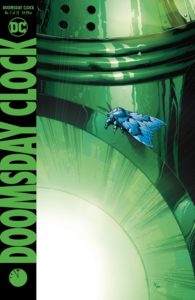 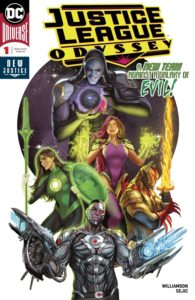 Two (maybe two and a half…) big series chapters from DC out this week: Heroes in Crisis continues the company tradition of (a) putting “Crisis” in the title of a big event, and (b) using it to kill off some characters, preferably current or former Teen Titans. Tom King’s good at the setup and the emotional heft — as with his Batman, he concentrates on the small conversations and side moments, although 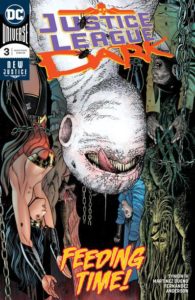 there’s one big fight — and this does its job of engaging readers and bringing them back for the next issue.  Before you mourn anyone, though, consider the lesson that everybody had to realize for that last Avengers movie: When time travel’s involved, don’t assume any deaths are permanent until the story’s completely over….  Doomsday Clock has stumbled in its scheduling (the first issue came out in late November of last year, so they’ve now managed seven issues in a little over ten months) but the story, after a lot of setups and feints, has finally settled into place, and in this issue Dr. 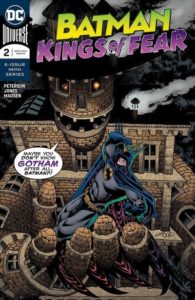 Manhattan actually shows up; that should be enough to get Watchmen fans to buy it, and they can admire the Gary Frank art while reading it.  Justice League Odyssey is the “half” event, since its “Justice League in Space” conceit comes with a lot less publicity and critical attention than the other two; it takes off from events in Dark Nights: Metal and No Justice, with a bunch of dormant shrunken planets held by an alien race now expanded into a sprawling, threatening “Ghost Sector” that needs exploring.  Writer Joshua Williamson has been making The Flash readable since its “Rebirth,” and he’s picked a decent sf-oriented cast with 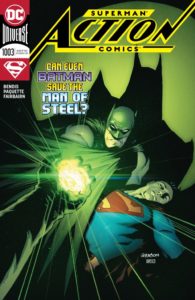 Cyborg, the Jessica Cruz Green Lantern, Starfire, Azreal (no, I don’t know how he fits, either…), and, well, Darkseid, albeit a younger, recently-resurrected one who’s kind of presented as a last-pages surprise but is right there on the cover.  It’s OK, although as a third JL book it might have to be more than that to succeed.  Justice League Dark, the second JL book, is already on its third issue, and smart enough to conclude its first story here, with satisfyingly pyrotechnic action (three single splashes, and one double-pager), character interaction and resolution about the group and its goals. Batman: King of Fear is one of those once-a-decade Kelley Jones-drawn Batman 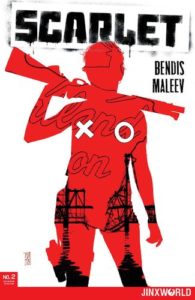 mini-series, focused on all the shadowy Hallowe’eny bits of Gotham like the Scarecrow; get it and be glad he’s still around to draw them.  Action, three issues into the Brian Bendis era, opens with more in-joke notes on Clark’s crowded desk, shows what happens to him when he gets in the same room as Kryptonite, has a World’s Finest guest star and adds another page to the mystery of Lois: motoring along nicely, in other words.  The other Bendis book this week, the creator-owned Scarlett, has him, and artist Alex Maleev, pouring their hearts into its tale of a reluctant, but natural, revolutionary; their storytelling chops shine throughout the book, but especially on a perfectly-paced last page. 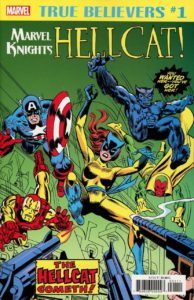 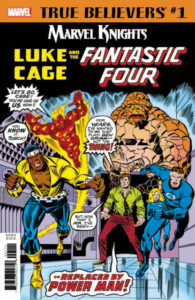 Another bunch of $1 “True Believer” Marvel reprints continue this month’s focus on the “Marvel Knights” older-readers imprint from 20 years ago. The two older ones are both from the same year, 1976;  Hellcat has the first appearance of Patsy Walker as that character, from

Avengers #144, near the end of Steve Englehart’s long run on the title and in the middle of a long story with artist George Perez involving the Squadron Supreme and the evil Roxxon corporation, and is a good example of the flashy, soapy best of mid-’70s Marvel superhero serialized storytelling. Luke Cage/Fantastic Four is from Roy Thomas and Rich Buckler, and is maybe a half notch down from the Avengers (because Perez > Buckler…); it’s during one of those periods when Ben Grimm isn’t the Thing anymore, so Reed hires Cage to substitute, and predictable but entertaining angst ensues. The other three reprints are from actual 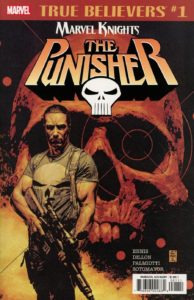 Marvel Knights books: the Black Widow benefits greatly from the J.G. Jones art, and from Devin Grayson’s twisty tale about a second, newer Widow fighting with Natasha; it’s also the first time the now-iconic Russian assassin got a female writer. Punisher War Journal reprints the first issue of that long-running companion to Frank Castle’s main book, and boasts Jim Lee art, but the real treat is the last book, the Garth Ennis/Steve Dillon/Jimmy Palmiotti launch of a long and fruitful Punisher collaboration; Dillon and Palmiotti take Ennis’s mix of over-the-top violence, grim humor and Frank’s silent, frighteningly-competent fanaticism (including bits like his hands-on advice about how to win a gunfight in a morgue) and make it look smoothly perfect. 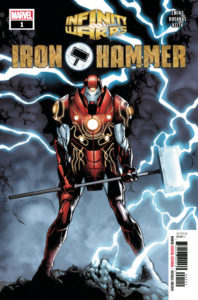 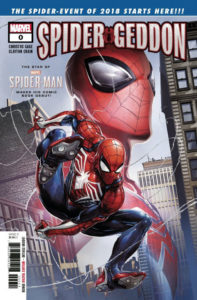 Marvel also continues its two-part “Infinity Warps” mini-series this week (in the Infinity Wars crossover, the universe got “folded,” so everything has kind of doubled up, meaning we get mashups of familiar characters and powers): Iron Hammer is, of course, Iron Man and Thor combined (hey, they both drink a lot…). Writer Al Ewing has a deep knowledge of Marvel continuity, so, like all 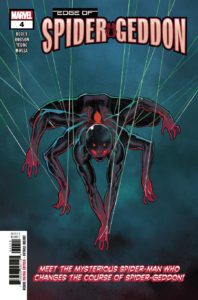 Elseworlds/What If? tales, a lot of the fun here is spotting all the other combos, from Malekith/Mandarin to Madame Masque/Hela: treat these books like the fan-friendly, goofy fun they are, and you’ll have a good time with them.  Spider-Gedden is more of a straight-ahead event, a follow-up to the multiverse-spanning Spiderverse, except that any story with a bunch of Spidey avatars is going to have a lot of wise-cracking; here, the least-humorous character is the Doctor Octopus-brained Superior Spider-Man, but he’s trying to recruit the Spidey from the PlayStation 4 video game universe, so there’s a nice Abbott/Costello straightman/jokester rhythm to their 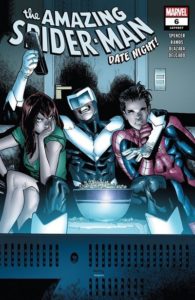 dialogue. As a lead-in to the main mini-series, this is an effective appetizer, especially with Clayton Crain’s fluid, shadow-tinged art nailing both the beginning and ending splash pages.  Meanwhile, Edge of Spider-Geddon completes that set of books introducing other Spider-avatars; this one is a universe where Pete gets killed fighting Norman Osborne, who fights a Goblin-costumed son Harry, but its real purpose is to set up a Spider-ringer, one who will presumably be critical to the events in the main story; on the strength of that development alone, if you’re enough of a fan to be reading Spider-Gedden in the first place, you’ll probably want this too.  Over in the regular Amazing Spider-Man title, 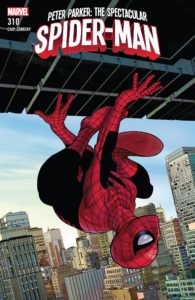 relaunch writer Nick Spencer begins his second arc in decent fashion, largely because it’s focusing on Pete’s new roommate, Fred Myers — aka Boomerang, one of the Superior Foes of Spider-Man that Spencer scripted in that critically-beloved series five years ago — and ends up with Pete and Fred in a super-villain bar: just the right mix of humor and drama, especially with Humberto Ramos returning for the Spider-art. Over in Spectacular Spider-Man, there’s an ending — not of the title, but of Chip Zdarsky’s run; he finishes strong by writing, drawing and coloring one of those man-in-the-street-interviews one-shot stories about who Spidey is, and why he’s important: an old tactic, but one that works very 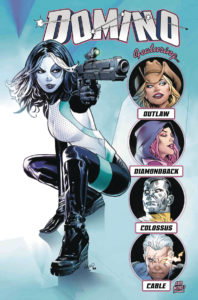 well here.  That leaves the Domino Annual, a collection of shorts involving the luck-manipulating mutant; it starts with a Gail Simone/Victor Ibanez story about how Domino and Diamondback met the third member of their sisterhood trio, Outlaw, and then delivers a Fabian Nicieza/Juan Gedeon tale about her time with Cable in X-Force, a Dennis Hopeless/Leonard Kirk six-pager about an inadvertent encounter with the pining-for-Kitty Colossus that turns into a date, and a Leah Williams/Michael Shelfer conclusion about Domino’s sponsoring of a Saturday super-person encounter group that shows enough research and empathy to make it surprisingly affecting: all more than enough to make this a good annual, and worth a look. 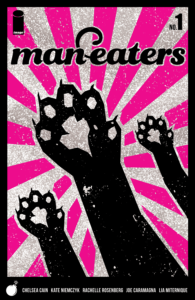 Man-Eaters is an sf story about what happens when, due to a virus, girls who start menstruating turn into killer were-cats who eat people — and not just men; the US responds by putting drugs in everyone’s food that prevent menstruation, but it doesn’t work for every girl. This is, of course, a fight-the-patriarchy set-up, and if you like Bitch Planet, you’ll probably like it too; it’s got similar world-building backmatter and a similar combination of drama and satire. The narrative’s a little on the nose (the viewpoint character’s a young teen girl, and what happens to her by the end of the first issue is exactly what you think), but given that it’s been a week where women-vs.-powerful-men, she-said-he-said has been on everyone’s minds, it couldn’t have picked a more 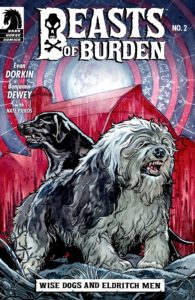 relevant publication date.  Stranger Things is a mini-series based on the cult-hit TV show, following the Will Byers character as he first becomes lost in the Upside Down; if you don’t know what any of that means, then it’s not so great that it will make you care, but if you’re already a fan of the show it does a good job of filling in some story blanks, and should be entertaining enough.  Beasts of Burden continues Evan Dorkins’s series about sentient animals (mostly dogs) fighting supernatural menaces in a small-town setting; it focuses on the Wise Dogs, a kind of Watchers Council, and it has the same combination of clever plotting, dead-on animal-centric characterization, horror and humor that the previous installments have had. Benjamin Dewey can’t quite make me stop missing 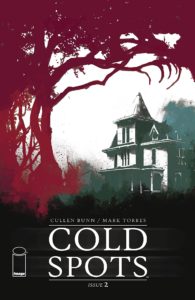 previous artist Jill Thompson’s wonderfully-drawn dogs, cats and other creatures, but he’s very good at it too (as he’s demonstrated with Kurt Busiek in Autumnlands), and if you like animals and supernatural stuff, this should be your comic.  Cold Spots is horror, too, about a man traveling to an isolated island to see an ex-girlfriend and the daughter he’s never met; people in the mainland town nearest to the island have been turning up frozen solid, though, and there are mysterious spirit sightings… after two issues, the actual circumstances aren’t yet clear, but Bunn was the writer/creator of the just-concluded, long-running Harrow County, and that was a very effective horror book that also started slow, and built into a great read, so there’s hope for this too. 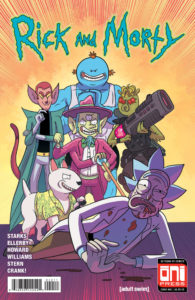 This week’s Hillbilly is a mini-series distinguished from the main title because, although it’s written by creator Eric 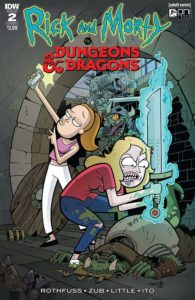 Powell, it’s not drawn by him; artist Simone di Meo’s work isn’t as detailed and EC-centric as Powell’s, but it’s shadowy enough, and handles the supernatural doings — and the imposing title character — well.  Rick and Morty has two issues this week: the regular one concludes a two-parter featuring a “Rick Revenge Squad” made up of former antagonists from both the comic and the TV show, while Rick and Morty Vs. Dungeons and Dragons is more of a

valentine to classic D&D than a “vs.,” as Rick, an OG player (naturally…) tutors Morty and, eventually, his family how to play it via virtual reality. Both books manage to catch the existentialistic, occasionally-tender tone of the show. The Wicked and the Divine:1373 AD is another of the one-shots the comic’s been publishing between arcs of the main title; since the previous arc had a lot of revelations, and the next one is the finale, this issue has Easter eggs and clues that will tie into it — so regular readers will want it, although it would have little meaning to someone who’d never encountered the main book.

With 40 years of experience in comic reading, collecting and reviewing, English Professor Phil Mateer has an encyclopedic mind for comics. Feel free to ask Phil about storylines, characters, artists or for that matter, any comic book trivia. He will post your questions and answers on the AABC blog. His knowledge is unparalleled! He is also our warehouse manager, so if you are looking for that hard to find comic book, ask Phil!
View all posts by Phil →
This entry was posted in New Comics, Reviews and tagged Amazing Spider-man, Beasts of Burden, Black Widow, Cold Spots, Domino, Doomsday Clock, Fantastic Four, Hellcat, Heroes in Crisis, Infinity Warps, Luke Cage, Man-Eaters, Punisher, Rick and Morty, Scarlet, Spider-Geddon, Stranger Things, Superman, True Believers, Wicked and Divine. Bookmark the permalink.