This was another week with lots of first issues (I haven’t done the math, but it seems like more new titles have started this year, from all kinds of different publishers, than in a long time), so let’s start with the indy/creator-owned ones, usually the most interesting: 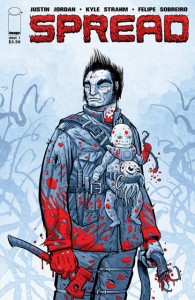 This is a post-apocalyptic tale, but not with zombies or vampires: it involves carnivorous space plants (like Day of the Triffids, but on steroids, since the plants — the “Spread” — have variations that can run and fly, and can possess/infect people). There are echoes of a number of other books here — a pinch of Lone Wolf and Cub; a little Shaolin Cowboy, a narrative tic borrowed from Saga, etc. — but it’s a fun recipe, one that makes this the best first issue of the bunch. 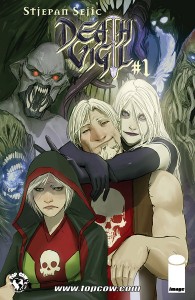 Two comics linked in that they’re both about death and the afterlife. Death Vigil is the more conventional of the two, about a team of heroes who work with Death to safeguard the living from various mystical threats; it reminded me just a little of Piers Anthony’s On A Pale Horse series, and gets points for a good-looking, painterly art style, and for giving readers value for their money ($3.99 buys you 48 no-ads, full-color story pages, a much better deal than you can get from Marvel or DC). The Life After is quirkier, and not as obviously about death at 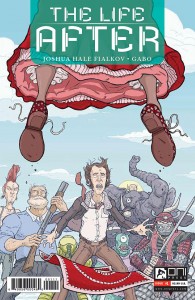 first; it’s about a guy who lives a boring, every-day’s-the-same existence, but gradually realizes that something’s not right about it. I won’t spoil the last-page revelation about where he actually, is, but I will note that the bearded guy with the shotgun on the cover is Ernest Hemingway, and that the setup reminded me, not of Anthony this time, but of another sf/fantasy author: Philip Jose Farmer, and his Riverworld series. Fialkov, who’s done both indy and mainstream horror comics, including I, Vampire, Echoes and Tumor, offers more than enough little twists and mysteries here to bring readers back for the second issue. 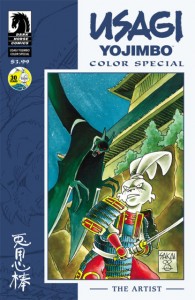 Sakai took some time off from chronicling the adventures of his long-eared, lapine samurai to draw the 47 Ronin series, and has been dealing with serious health issues with his wife (a number of artists have contributed work to eBay auctions to help them defray expenses, here), but he’s about to publish a new six-issue mini-series with Usagi in a month or two. In the meantime, this collects various short stories starring the character, mostly from Dark Horse Presents; if you’ve never sampled the pleasures of his intricate, well-constructed, historically-accurate (well, except for the rabbit part) tales of feudal Japan, this is a great place to start — and, like Death Vigil, it’s a good deal: 34 pages of full-color work for $3.99, with no ads to get in the way. 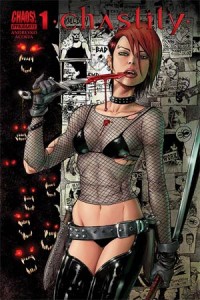 This is a relaunch of the ’90s Chaos book (Dynamite Comics, bless ’em, is in the process of reviving most of that Phoenix-based publisher’s work), about a not-quite-vampire Bad Girl/heroine, and the first issue offers the beginning of her origin; set in the ’80s, for no particular reason, it involves her encountering an Anne Rice-ish author of vampire novels who turns out to be more than she seems, to deadly effect for her and her family. The good news is that it’s reasonably true to the tone and style of the original Chaos books, so older fans should like it; the bad news, for me, is that I found those books to be mostly juvenile, C-movie level fare when they first came out (to be fair, I was too old even then to be in the right demographic), and there’s nothing here to make me change my mind about them — so I won’t be coming back for the second issue. 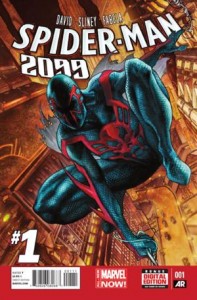 Two first issues from Marvel: Spider-Man 2099 is a relaunch, with the Miguel O’Hara character now in the present-day Marvel universe; the best news is that it’s by Peter David, the original series’s writer, and he’s dependably entertaining, always offering well-made stories with liberal amounts of humor, suspense and characterization (the art’s decent-but-unremarkable, but

you can’t have everything — and I tend to follow the writing more anyway…). The Original Sin spinoff features Thor and Loki, as they follow up on the revelation that there’s a Tenth Realm (along with the standard Norse Nine Worlds), and that Thor has a previously-unknown sister trapped there. Aaron writes Thor and Original Sin, while Ewing writes Loki: Agent of Asgard, so the tone and character are both dead-on; the one disadvantage is that a lot of this recaps scenes from those previous books, so there isn’t a lot of actual new story, or actual sister, coming until the next issue. Still, fans of all three series should find this in-continuity enough, and important enough, to buy it. 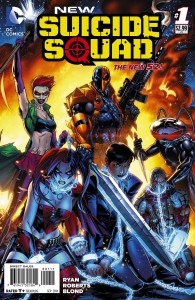 … and, just to keep the comics universe balanced, we have two new first issues from DC this week, too. Like Marvel, they’re both more reboots/continuations of old characters than brand-new offerings. Suicide Squad, in fact, is the same old Dirty Dozen “special ops with people in jail” concept with (a) a “new” in front of it, (b) a new co-director to make Amanda Waller mad, and (c) some new villains, specifically Black Manta, Joker’s Daughter and Deathstroke. Those latter two make Harley Quinn and Deadshot, respectively, redundant, so while everyone goes on a first mission together, it’s a 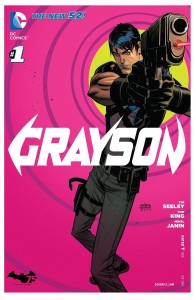 safe bet they won’t all be coming back in one piece. I consider the first-volume ’90s John Ostrander writing years on this title the gold standard, and never found much to recommend the recent New 52 version, but this incarnation at least reads well, moves swiftly and has those various intriguing match-ups to recommend it, so I’ll be following along for at least a while. Grayson is the more high-profile of the books, coming off the recent Forever Evil mini-series, as Dick Grayson ditches the Nightwing costume, agrees to let everyone think he’s dead, and joins a super-secret spy organization; this initial offering involves a high-octane mission, introduces a female partner whose name pre-New 52 fans will recognize, and ends with indications that Spyral, Grayson’s new employers, are more sinister (and possess quite a it more information) than they seem. Like New Suicide Squad, it’s fast-paced and entertaining enough to keep readers around for a second helping, at least. 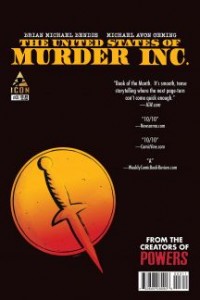 Two by Bendis: USoM,I is his creator-owned work with old Powers partner Oeming, and involves a near-future US where the Mafia have formal control of most of the Eastern seaboard. It follows Valentine Gallo, a newly-made man, whose first mission to a congressman goes, through no fault of his own, spectacularly wrong, making him an assassination target for a number of people, including the CIA; meanwhile, his mother reveals that she’s been working as a spy for the FBI, and wants him to turn on his paisanos, but so far he’s refusing. Bendis, 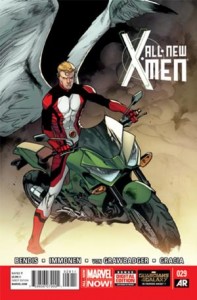 like his contemporary Robert Kirkman, is very good at setting up interesting, mostly-realistic characters in high-concept what-if settings, and this is no exception. All-New X-Men does the same thing, except that the high-concept setting is the Marvel Universe, and the characters are the time-displaced Silver Age incarnations of the team, currently trying to adjust to the (to them) dystopian modern-day version of their world, teamed up at the moment with the “old,” currently-a-fugitive Cyclops and his team. Got all that? Good, because in this issue they’re all fighting yet another time-travelling team (including yet another couple of versions of themselves), this one from the Marvel future, led and controlled by someone who claims to be Charles Xavier’s son. If that all makes your head hurt, don’t worry; Immonen’s very clear-cut art makes the dozens of characters and their movements easy to follow, while Bendis, an old hand at this

kind of large-cast soap-opera story after years of Avengers writing, manages to combine all his disparate ingredients into a well-seasoned stew (well, there’s one bad-guy time-travel plot twist right at the end that seems pretty stupid, but nobody’s perfect…)..

We’re getting into “I’ve said good stuff about them previously, so let’s just summarize” territory with these last few books: Lumberjanes is a cool girls-at-summer-camp story with a fantasy/mystery element; it’s fun to read to appreciate how well the different characters complement one another, and for the comic energy in the art, and you could see it being a really really cool Nickelodeon cartoon. Daredevil has strong Waid story crossed with strong Samnee art, in a team that’s been together long enough to know each others’ strengths, and tailor both story and art to them; this issue fills readers in on what happened to Matt’s cancer-stricken partner Foggy between the end of the previous DD series and the start of this one, so it’s a good stand-alone introduction for those sampling the 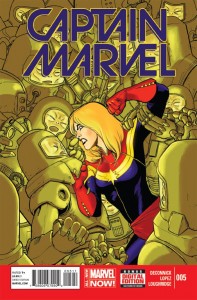 comic for the first time. Finally, Captain Marvel is noteworthy because Deconnick has turned into a good writer right before our eyes, starting out decently, then hitting a new level with the confident indy Pretty Deadly, and now transferring those chops to make corporate characters like Carol Danvers strong, intriguing and reasonably-human heroes. This first arc, ending next issue, has taken Carol into space, where she has to deal with complex alien politics, a refugee planet and a corrupt empire; Deconnick’s balancing of the subtleties and necessities of diplomacy (the previous issue, and this one) with the understanding that sometimes you just have to punch something really hard (the climactic battle, next issue) show how easily she’s now able to perform the tightrope act of a seasoned storyteller.

With 40 years of experience in comic reading, collecting and reviewing, English Professor Phil Mateer has an encyclopedic mind for comics. Feel free to ask Phil about storylines, characters, artists or for that matter, any comic book trivia. He will post your questions and answers on the AABC blog. His knowledge is unparalleled! He is also our warehouse manager, so if you are looking for that hard to find comic book, ask Phil!
View all posts by Phil →
This entry was posted in New Comics, Reviews and tagged Chastity, Daredevil, Death Vigil, Grayson, Loki, Spider-Man 2099, Spread, Suicide Squad, The Life After, Thor, United States of Murder Inc., Usagi Yojimbo, X-men. Bookmark the permalink.