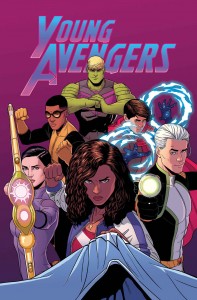 I know I put this at the top of my list every time it comes out, and you’re probably tired of hearing about it, but I don’t care: it’s been a wonderful series, with pretty and precise art, great characterization and plotting, and a smooth teamwork between Gillen and McKelvie that’s just made the whole story hum and surge like a racing-car engine. This ends the big story/fight, and resolves a number of issues, especially involving Loki; the final two books will be mostly a well-deserved curtain call and wrap-up (although, knowing those two, there will be some cool final twists, too). As in almost every issue, there are some imaginative and startling special effects — and the climax, as Billy uses his magic to, literally, rise above everything, is the best of the whole series (although I think Alan Moore and J.H. Williams III used the trick first, in Promethea…). The only downside to any of this (other than not getting any more new stories on these characters from this team) is that the remarkably complex and appealing Loki will end up in other, lesser hands, and inevitably come to resemble the more two-dimensional movie villain — but at least we’ll have this run as an example of how creativity and daring can make even the most stereotypical characters new again. 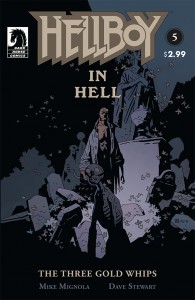 It’s been a couple of months since one of these came out, but any time Mignola contributes both story and full art to his signature creation, it’s worth the wait. This issue is a stand-alone tale, of Hellboy encountering a hapless ex-soldier who made a deal with the devil one night years ago, and now has an appointment to give him his due.  It’s a showcase for the kind of eerie, dark European fairy-tale-style myths that Mignola does so well, and the minimalist script and the shadowy art are perfect vehicles for it; it delivers both shivers and fun, and, as a bonus, the reader doesn’t have to know anything about the last few years of the character to understand it. 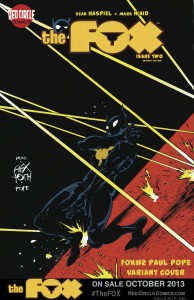 Haspiel is an indy creator with strong Kirby and Alex Toth influences, and this Archie superhero character, a kind of lone-wolf Batman/Spirit type, offers a great match for his strengths. The credits list Haspiel as “plotter” and Waid as “scripter”; I’m guessing that means Waid took the already-done art, talked to Haspiel about the story outline, and then supplied the dialogue, and the interior monologue that acts as captions. It’s a sprawling story that transports the hero to another world, where he has to fight a bunch of monsters to help rescue a kingdom from a tyrant: pretty standard stuff, except that the energetic art and a healthy dose of humor help to propel the story, as does having a non-powered costumed character who’s so out of his depth. Look for the variant cover, a Paul Pope homage to Alex Toth that’s a marvel of color and composition. 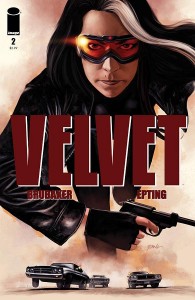 If you liked this creative team’s Captain America (the one with Bucky/Winter Soldier as Cap, mostly teamed with the Black Widow) then you’ll want this series too: it has the same combination of gritty urban drama, shadowy globe-trotting conspiracies and shiny high-tech spy-thriller accessories. They all center around the title character, a seemingly-anonymous secretary who’s actually a former butt-kicking super-agent with an unexplained tragedy in her past — oh, and she’s been framed for murder by the previously-mentioned shadowy conspiracy people, and has to dodge cops, government agents and assorted bad guys to prove her innocence and save the world. It’s a fun, effective mix, and a model of how to craft a very very smoothly-presented action comic. 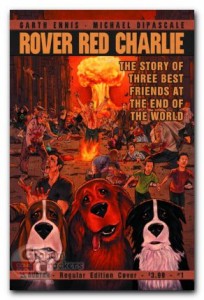 Three dogs try to survive a zombie apocalypse — or, well, not quite zombies; more like Ennis’s The Crossed, in that almost all the humans go homicidally nuts, although no one has the cross sign on their faces (maybe because he wanted a stand-alone story, without ties to that series’s continuity? It’s strange, because it’s the exact same thing…). Anyway: zombie-ish apocalypse. Three dogs. Everything humans (whom they call “feeders”) say is gibberish to them (just like that famous Far Side cartoon), and they can’t communicate back, either (Ennis translates a dog’s frantic barking to the dialogue “I’m a dog! I’m a dog! I’m a dog!”), so they stick together, try to interpret things as best they can, sniff each other’s butts, and roll with the punches. If you don’t know dogs, you may find this stupid — but, speaking for the rest of us, I thought it was a clever idea, and this first issue executed it well; I’ll be back for the second installment. 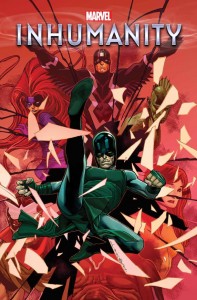 This is a stand-alone issue, but following it closely in the next few weeks are Inhumanity: Medusa and Inhumanity: The Awakening, plus tie-ins from many of the Avengers books, and an eventual ongoing series. It picks up right after the end of the Infinity mini-series, with the Inhumans’s great floating city of Attilan blown up by leader Black Bolt and his insane brother Maximus (who are presumed dead, although we know better), and the gene-altering Terrigen Mists being dispersed across the earth, where they’ve triggered a whole bunch of people who, unknowingly, had ancient Inhuman ancestry into becoming cocoons, from which will presumably emerge various mutants, creatures and other super-powered forms of life (yes, it’s all been planned by Jonathan Hickman and Matt Fraction: of course it’s complicated…). Anyway, this issue has the core Inhumans, the surviving royal family, trapped on earth and trying to figure out what happened, while racked by guilt, grief and exposure to earth pollutants, which make them sick. Most of the issue, as the cover implies, is on Karnak: we get Insane Karnak, followed by Sad Karnak, followed shortly after by Very Flat Karnak, and the upshot is that bad things are coming, and the planet’s about to be inundated by brand-new, confused human/Inhumans hybrids. It’s all OK, but a trifle exhausting, especially after the mega-events of Infinity; this is a good comic to keep as a starting point, but the many others down the road may have to work hard to sustain any reader interest. 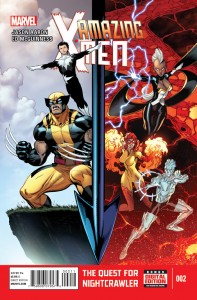 Nightcrawler’s coming back, at least for the first five issues of this comic — he’s in a place very like heaven, but it’s being invaded by his demonic father Azazel (my co-reviewer Dan’s now having Chuck Austin flashbacks, and suppressing a shudder…), and now Wolverine and some other X-Men are getting drawn into it. Aaron makes it work pretty well, with a couple of knowing “Isn’t this over the top?” sidelong glances at the reader, and his swashbuckling version of the blue-furred X-Man is a refreshing return to Kurt’s early Claremont/Cockrum roots. Like Astonishing X-Men, this series will rise or fall based on its creative teams, but at least this first arc looks like a decent start. 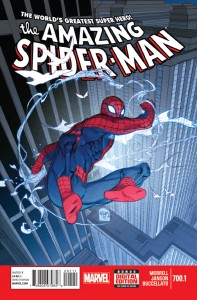 Three new Spider-Man books this week, with the first two featuring the Peter Parker version (no, he’s not back… they just kind of squint and don’t say when the tales take place). Amazing Spider-Man #700.1 is the first of a four-issue story wherein NYC is about to be hit by a blizzard, and Peter has to cope with it and Aunt May in danger; the writing is a little too portentous, but does draw in the reader, while Klaus Janson 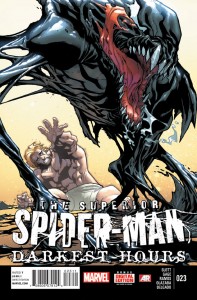 reminds us what a too-rare treat it is to see him doing full art on a book these days. Marvel Knights Spider-Man is a gonzo mini-series involving, maybe, Arcade and a cast of dozens of villains, with some imaginative layouts from Rudy and a decent script by the always-interesting Kindt. Meanwhile, over in his regular title, the Dr. Octopus-brained Superior Spider-Man fights Venom, and, despite trying to do good in the world, continues to dig himself into deeper and deeper trouble because he can’t help acting like a dick. This actually makes him surprisingly relatable, and the Ramos art makes it go down smoothly, too: a reminder of how this change in the character, however mockable and temporary, has yielded a number of readable and entertaining stories. 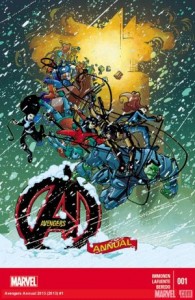 Everyone leaves Avengers Mansion for the holidays except Captain America, but then a girl breaks in, and things threaten to get explode-y, and everyone comes back… this is a lighthearted and, ultimately, sentimental story, especially with LaFuentes’s cartoony art, so your tolerance for it may vary, but as a stand-alone Christmas issue it’s decent enough;  Immonen and LaFuente definitely make a good team, and it’s the kind of tale that fits well in an annual, too. 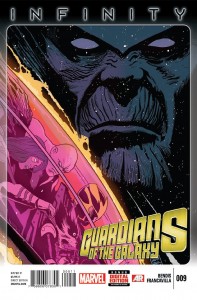 The tale-end of an Infinity crossover, as the crew battle to save Abigail Brand and the S.W.O.R.D. space station from Thanos’s hands, and open up the pathway back to earth for the Avengers. Since the last issues of Infinity came out a couple of weeks ago, we already know what happens, but the Bendis dialogue is readable, and the Francavilla art is nice to look at (ironic that it took Afterlife With Archie for me to appreciate him), and more than enough reason to buy the comic. 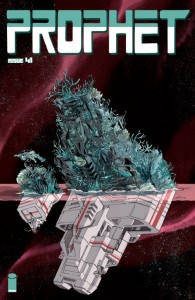 After 20 issues, this reminds me a lot of the Heavy Metal serials from that magazine’s peak in the ’70s and ’80s, in that (1) it’s become completely incomprehensible, and (2) it doesn’t matter, because the story and art provide such a surreal, fascinating sf/galactic buzz that readers can’t help but like the book.

With 40 years of experience in comic reading, collecting and reviewing, English Professor Phil Mateer has an encyclopedic mind for comics. Feel free to ask Phil about storylines, characters, artists or for that matter, any comic book trivia. He will post your questions and answers on the AABC blog. His knowledge is unparalleled! He is also our warehouse manager, so if you are looking for that hard to find comic book, ask Phil!
View all posts by Phil →
This entry was posted in New Comics, Reviews and tagged Avengers, Guardians of the Galaxy, Hellboy, Inhumanity, Iron Man, Prophet, Rover Red Charlie, Spider-man, The Fox, Velvet, X-men, Young Avengers. Bookmark the permalink.