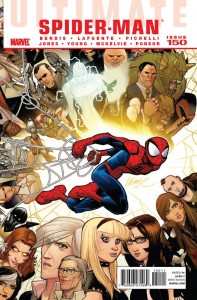 … and that’s just the major artists; the backup story has  a couple of  pages each from, among others, Alex Maleev, Dan Brereton, John Romita Senior, Frank Cho, Jim Mahfood, Craig Thompson (!), James Kolchalka (!!), and another dozen or more people. That adds up to 96 pages of story and art, so the $6 cover price isn’t that bad — and, as a celebration of the best mainstream superhero comic of the ’00s (yep, the first issue was cover-dated October, 2000), it’s a good example of the heart and fun that this book has always brought to the table. Maybe it no longer has the “I can’t believe it’s that good” aura of its first few years, when it singlehandedly updated Spidey for a new generation and made him cool again, but it’s still dependably entertaining and frequently surprising, and Bendis hasn’t missed an issue yet; that alone puts him in historic company. 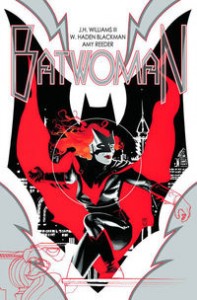 There’s only 16 pages of story here (plus a few promo pages of the actual first issue of the title, coming in a few months, and that same damn promo for Detective #871 that they’ve been running in all of the DC books this month), but hey: it’s J. H. Williams III (well, half of it is), and it’s hard to resist. I honestly don’t know how the book is going to read without Rucka on board, and there isn’t enough here to tell, but there’s no doubt that it’s going to look good, and that’s a start. 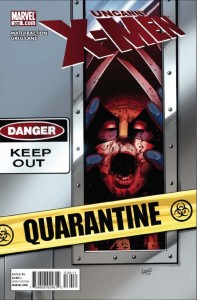 Your two Fraction books for the week; Iron Man is a little better, I think, because it feels more like his character, considering he’s been with this new version from the beginning (almost, geez, three years ago?), and he’s so good at creating imaginative, techno-oriented plots and putting everyone — Tony, Rhodey and Pepper — in situations where they can show their smarts and heroism. Uncanny X-Men isn’t bad, either, but it’s the start of a new plot rather than Iron Man‘s climax of an old one, so there’s more setup than action, as an outbreak of “mutant flu” sidelines most of the big guns, leaving the spotlight to fall on some of the less-used heroes instead (including one big gun that we haven’t for a while in this book). After the musical-chairs artists of the last few months, it’s even good to have Land back; he’s been doing this for long enough now that 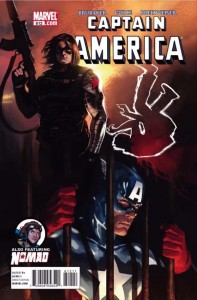 his versions of the characters are comfortably familiar to readers, as they settle in and await developments on this new storyline.

Two by Marvel’s other mainstay writer, along with Bendis and Fraction. Cap involves Bucky-Cap in jail, awaiting trial for his crimes as the Winter Soldier, as Brubaker shows off his affection for earlier versions of the comic by bringing in both an old supporting character and (briefly) an old villain. Watch him work 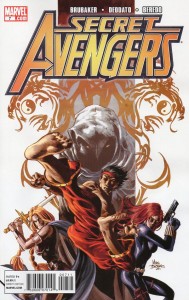 out the plot ramifications carefully, while providing room for the characters to interact and enough action to let Guice show off his art chops, and you can see why Marvel’s fortunate to have him. So too for Secret Avengers, with Deodato getting the opportunity to draw lots of ninjas fighting with Steve Rogers, the Black Widow, and Shang-Chi over the attempted resurrection of… well, Fu Manchu, but, amusingly, Marvel can’t actually use his name here (contracts having expired), so everyone just refers to him as “Shang-Chi’s father.” There’s the same careful construction, and the same small-but-effective character bits, that allow a writer to make readers feel like they’re in good hands. 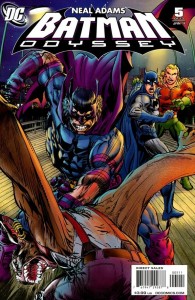 On the other hand… well, that “writer” isn’t in quotes up in the credits by accident. Yes, the art is wonderful, an indication that Adams is still, even now, at the top of his game. But the “writing” — well, to be writing, it’d have to have logical plotting, themes that made sense and were communicated without a crowbar, and dialogue that could actually come out of people’s mouths, and not make readers twitch and blink rapidly and slam their foreheads with the palms of their hands. Go try to read this and see. Uh… yeah, I can see the palmprints from here; “writer” it is, then. 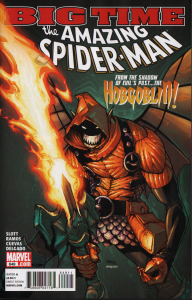 Moving into Spidey’s new twice-a-month incarnation, there are a lot of good signs: Ramos’s art, for one; he’s dependably fun, with his mix of caricature and drama, and especially so when he’s got insane villains to draw. The Hobgoblin(s) fit the bill perfectly here (although fans of the Jack O’Lantern/Macendale iteration, assuming there are any, won’t be too pleased). Peter’s new super-science techy job looks promising, too, especially with its cast that look like they stepped out a lab scene from either Eureka! or Big Bang Theory; that’s a lot more logical than the moping ex-photographer bit we’ve seen for the last year or so, and another reason for optimism as this new direction takes hold.

Stuff I bought, but don’t have anything new to say about, so read reviews of previous issues in the archives if you want to know:

With 40 years of experience in comic reading, collecting and reviewing, English Professor Phil Mateer has an encyclopedic mind for comics. Feel free to ask Phil about storylines, characters, artists or for that matter, any comic book trivia. He will post your questions and answers on the AABC blog. His knowledge is unparalleled! He is also our warehouse manager, so if you are looking for that hard to find comic book, ask Phil!
View all posts by Phil →
This entry was posted in New Comics, Reviews and tagged Batman, Batwoman, Bendis, Butch Guice, Captain America, Ed Brubaker, Fu Manchu, Greg Land, Hobgoblin, Humberto Ramos, Iron Man, Matt Fraction, Neal Adams, Secret Avengers, Shang-Chi, Spider-man, Ultimate Spider-man, Williams III, X-men. Bookmark the permalink.