All right folks, it’s another dose of opinionated Silver/Bronze Age analysis.  Let’s do this! 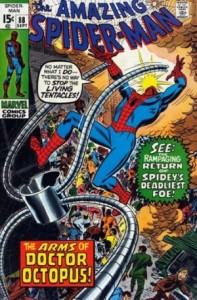 I was a little disappointed in this issue.  It was extremely misleading on the cover!  Probably only half the book was actually Doc Ock’s phantom legs attacking random people.  The rest was the usual Silver Age Spidey goodness.  It’s exactly what you’d expect from this Stan Lee/John Romita plethora of team ups from this era.  It’s absolute quality stuff that’s very simple to look at and enjoy.  Doc Ock captures some Chinese general (complete with stereotypical Asian designs) and Spiderman has to stop him.  Cue the excessive use of webbing to the face, issues with J Jonah Jameson, and the well-crafted fight scenes, and you get yourself a good image of the 1970’s Marvel era.  More info can be found HERE.

Did you know Spider-man is still being published?  Cause if you didn’t, I worry about you reading this blog.  He can be found in Amazing Spider-Man, New Avengers, Avengers and plenty of one-shots on the stands now. 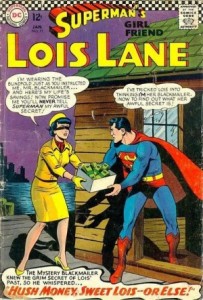 Worth noting cause it has a Catwoman story (if you’re into that kind of thing).  Once again, DC provides a story that shows what the Silver Age is really all about.  Lois has to protect Superman after he has been turned into a cat.  Yes, Catwoman turned Superman into a black cat, that for some reason still had a cape.  After Lois becomes a mouse that is almost fed to SuperCat, she gets out and has to find a way to turn Supes back to normal.  Add to that the cover story of blackmailing Lois to get stuff for aliens (I’m not even sure what really happened) and you’ve got a pretty sweet set of stories going on.  It, of course, also has the “why won’t Superman love me?” idea planted TWICE, so it’s clearly a tool for Lois’ character to work with.  More info can be found HERE.

Lois Lane can now be found randomly in most of the Super titles.  Her sister is sometimes involved in the Supergirl comic, but you can find Lois in Action, Superman, and probably more if you just look in the right places.

Oh man, this was just kinda ridiculous.  There were four different stories in this anthology all involing aliens and plot twists and plenty of other stuff.  You get the prime art of Don Heck, Steve Ditko, and Jack Kirby all in one issue.  The cover story doesn’t really mislead that much.  It centers around a washed up actor desperately trying to get his career back on track.  He does, but not in a way that anyone on Earth will ever know about! There’s a weird story about a special secret agent alien trying (accidentally) to find his people once again.  There’s plenty of stories here to keep people interested for a little while.  More info can be found HERE.

Tales to Astonish isn’t really around anymore.  It led to the debut of Ant-man and the Wasp.  It eventually became a two story book with The Hulk and Sub-Mariner before it ended.  Nowadays you can find some collections, but the older pre-super-hero stuff is harder to find.

And that’s it!  Leave some comments, make some recommendations, but please…don’t criticize too hard.