It Came From the Back Room #54 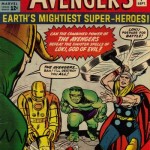 I knew it had been a while since we did one of these back-room-special posts, but when I checked the archives I was surprised that the last one was way back in early October. It’s not that I haven’t been working on backstock; it’s that Batman comics took a long time to sort, and then while we put them out in early December I never did a post on them, and now for the last month and a half or more I’ve been working on Avengers comics. It turned out that we had 17 long boxes (or almost 6,000 comics’ … Continue reading →