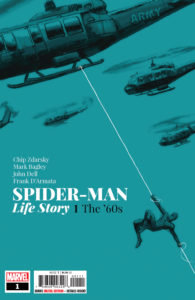 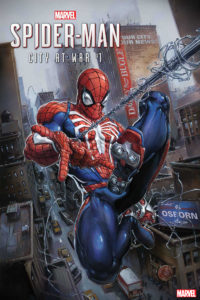 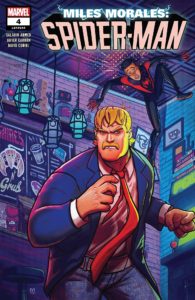 Spider-Man: Life Story imagines Spidey if his life in the comics had unraveled in real time — so, in this mini-series’s first issue, it’s 1966, and a Peter Parker who’s a college junior is thinking a lot about the Vietnam War — he has a conversation with Captain America about it, and Flash Thompson’s been drafted too; also, an older Peter handles adversaries like the Green Goblin differently than a still-15-year-old Pete might have. Mark Bagley, a long-standing spider-artist, makes it all look official, and Chip Zdarsky 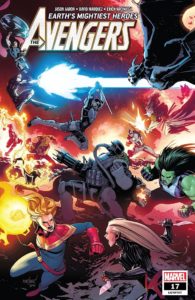 offers a thoughtful script, pulling this out of what might have otherwise just been another What If? speculation.  Spider-Man: City at War adopts that very popular video game — and, in fact, is the first comic set in Marvel’s “Gamerverse,” with more apparently to come.  Artist Michele Bandini establishes her art chops, and gets on readers’ good sides, with a nice-looking web-slinging splash just three pages in, and writer Dennis Hallum (who’s been doing Marvel work for years under the pseudonym “Dennis Hopeless”) does effective 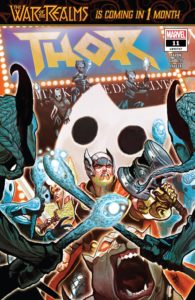 work combining scenes from the game with deeper and more detailed plot and characterization; you don’t have to have played it to like this, although it’ll certainly help you predict what’s going to happen.  Miles Morales: Spider-Man offers a done-in-one jump-on story (helpful to new fans created by the Oscar-winning animated film) that’s an amusing riff on Ferris Bueller’s Day Off, complete with an assistant principal determined to catch him playing hooky, and a double-page splash map of his attempts to get back to his dorm before the vice-principal does; it’s a charming 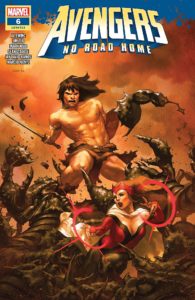 showcase that ought to do its job of adding readers to the comic. In Avengers, writer Jason Aaron wraps up its “Vampire Civil War” arc just in time for the “War of the Realms” one set to begin next issue; that’s of course connected to Thor, also written by Aaron, and the same housecleaning/wrap-up/stage-setting is going on over in this week’s issue of that title, too, with guest artist Lee Garbett presumably giving “War of the Realms” artist Russell Dauterman a little more lead time to draw the dozens of dimensions and races, and hundreds of characters, required there.  Meanwhile, the 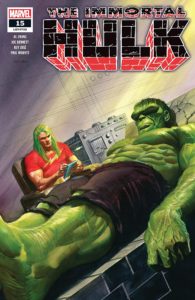 Avengers: No Road Home 10-issue series begins its second half, with a time-tossed Scarlet Witch teaming up with Conan (as you can see by the cover, up to the right there), and the Hulk revealing part of his chilling long-game plans; since Al Ewing is both one of the writing triad here, and the solo scribe over on the Green Goliath’s own book, it all rings true, and interconnects smoothly. The Immortal Hulk has been a breakout horror-tinged hit, thanks to Ewing and penciller Joe Bennett, with back issues scarce and trade sales rising; the newest installment sees the return of Doc Samson, and is a good example of the comic’s often-creepy pleasures for readers curious about the fuss. 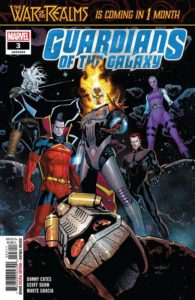 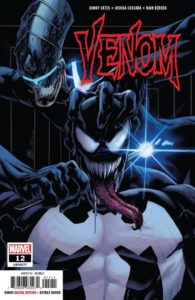 Two Marvel books written by Donny Cates are out this 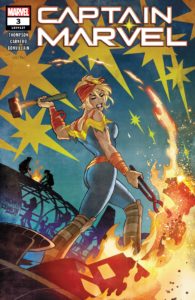 week — in Guardians of the Galaxy, he pays a lot of tribute to the early-’00s Abnett/Lanning run (the one that was used as the basis for the GOTG movies), with many of their cosmic/Annihilation stories’ cast, including Wraith, the Richard Rider Nova, the Sh’iar, and Annihilus himself, all trying to figure out how the currently-dead Thanos will manage to resurrect himself. Over in Venom, Cates, after giving the relaunch a universe-shattering first arc, has made the second about the quieter aftermath, with a damaged symbiote and weakened Brock confronting the evil Maker and each other, 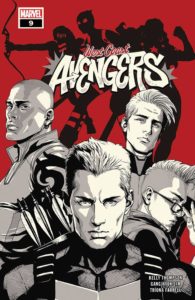 but especially Brock’s abusive father (Cates’s earliest Image book, God Country, was about father-son relationships at its heart, too; he knows just how to add enough nuance to make it poignant, and not merely melodramatic). Kelly Thompson is another writer with two Marvel books out, and with a worldview distinctively sunnier than Cates’: you just know that her Captain Marvel, organizing a confident, determined resistance against a ruthless and misogynistic dictator, is going to come out on top eventually, and she and artist Carmen Carnero work hard to give this the same positive energy and thrills that 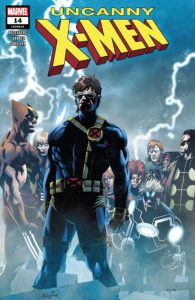 have attracted so many fans to the movie. West Coast Avengers is more straightforward-YA, with sharply-drawn late teens/twentysomethings; it’s no accident that the group is being filmed, Office-like, by a reality-show TV crew, giving each cast member a chance to talk directly to the camera in a series of Gang Hyuk Lim’s cleanly-composed panels, or that their complicated relationships are as fascinating as the action scenes, involving yet another vampire infestation.  Uncanny X-Men continues in the “real” Marvel world (as opposed to the “Age of X-Man” one all those mini-series are covering until the summer), 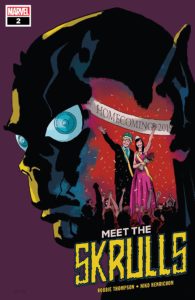 with the newly-returned Cyclops and Wolverine pulling together powerful allies like Magik and Havok to substitute for all their vanished friends; it’s still fun to watch Scott and Logan, both master tacticians, waste no time in taking the fight to their adversaries, both criminal and governmental.  That leaves Meet The Skrulls, whose main character just wants to be a normal emo teen girl, but has to contend with parents and a sister who, like her, are shapeshifting aliens bent on infiltrating the Earth and achieving world domination for their race; five issues seems just about right to tell this story briskly, keep it unpredictable, and leave readers asking for more. 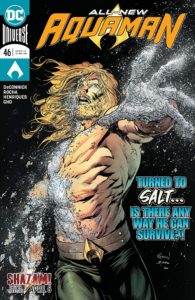 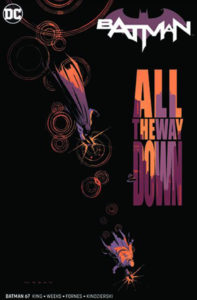 Aquaman‘s Kelly Sue DeConnick-scribed arc continues, now past its “what’s going on?” early installments and into the all-out mythic action: check out all the splash pages — including a climactic double-page one — she gives the Robson Rocha/Daniel Henriques art team, and how excellently they respond (dragons! what comics artists don’t love to draw them?), and remember that it was DeConnick who wrote the Captain Marvel volume that its 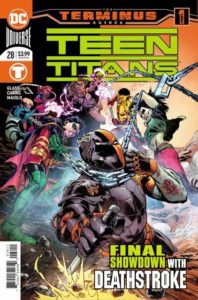 movie producers used for inspiration. My only complaint? A pet peeve: the scene on the cover has nothing to do with anything that happens in the actual comic — but that’s on the editors, not the creative team.  Batman continues its one-off “Knightmares” tales, supposedly the dreams the Caped Crusader is having while captured and unconscious; this one’s an almost-wordless — but not soundless — chase across Gotham’s rooftops and down into its sewers, with an ending that brings everything together and is, in the best sense of the term, looney; it’s another case where the writer trusts the artist to deliver big (the lack of dialogue puts it all on the visuals), and Lee Weeks and Jorge Fornes do it in style.  Deathstroke fans should take note of Teen Titans, which begins a crossover with that fast-healing 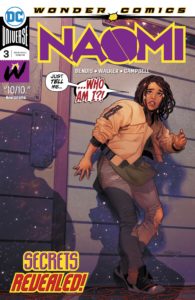 mercenary’s own title (and co-written by his author, Christopher Priest), involving Damian getting the team to capture the bad guy, and then confining him in his secret bad-guy jail; obviously, since it’s the first of four parts, things don’t go quite as smoothly as planned.  Brian Michael Bendis’s DC imprints, the company/continuity-connected “Wonder Comics” and the creator-owned “Jinxworld” — each get represented this week; Naomi is about a small-town adopted girl who’s gradually realizing she’s special, with a mysterious and powerful ancestry (the fantasy of pretty much every adopted kid — and most others, too); this third issue begins to reveal that background, which has been promised to connect strongly 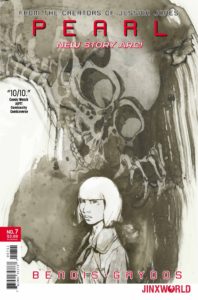 to upcoming DC events — but the best reason to like it is that Bendis, who’s raising teen girls himself, gets the parent/child dynamics and dialogue down perfectly.  Pearl, about a young tattoo artist and reluctant yakuza hit-woman who’s resisting her own background after falling in love — is a showcase for Michael Gaydos’s detailed, beautiful art and Bendis’s longstanding love of stylish mobster noir and suspense; this issue starts its “second season,” so it’s a good recap/jump-on opportunity for what might be his best comic right now. That leaves The Wild Storm, Warren Ellis and Jon Davis-Hunt’s reboot of that universe and its characters, which, after a long set-up, is using its final four 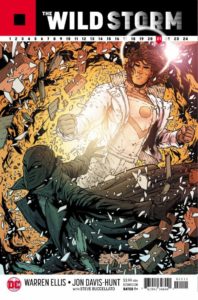 issues to deliver a long-brewing, and potentially planet-ruining, war between two shadowy, powerful spy organizations — the space-based Stormwatch and the earth-based I.O. — that might kill millions of people (but not if our newly-formed team of reluctant heroes have anything to say about it…); Ellis, like his fellow U.K. writer Grant Morrison, is good at playing the long game, and so the payoffs and revelations here should reward readers who’ve been sticking around for almost two years to see what happens (the rest of you will need to get the trades and start at the beginning — unless you’re one of those spoiler-craving people who read the last few pages of a mystery novel first…). 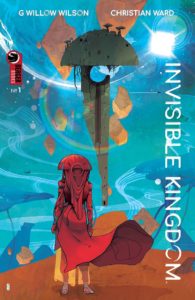 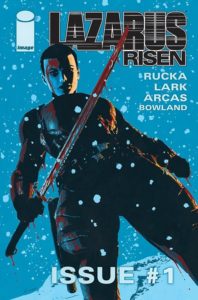 Invisible Kingdom is created by G. Willow Wilson (Ms. Marvel), and is a sprawling sf saga (like, um, Saga) that features an intergalactic church involved in governmental corruption and other bad stuff; the viewpoint characters, both women, are a young initiate into the church’s convent, 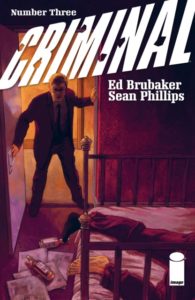 and a hard-scrabbling space-freighter pilot, and it looks like they’ll eventually hook up to try to bring down the corrupt empire. Christian Ward (Black Bolt, ODY-C) supplies both art and colors, and manages the neat trick of making the settings both grounded and other-worldly, and this first issue showcases Wilson’s extensive world-building; since this is being published through all-star editor Karen Berger’s Berger Books imprint, it should feature high-quality storytelling from everyone, and this is a chance to get in at the beginning.  Lazarus: Rising is the

return of  Greg Rucka and Michael Lark’s Forever Carlisle, a genetically-engineered clone who serves as an enforcer for one of a dozen mega-rich families who’ve divided up the world to rule; for $7.99, you get 44 pages of high-gloss art/story, a three-page character list/summary of what’s gone before, and 15 pages of world-building, writer’s comments and a letters column: enough to bring new readers on board efficiently (fans of the earlier volumes of this series won’t need any encouragement to start buying it again).  Criminal concludes a two-part tale about an aging comic-book artist and his search for some missing art; besides the 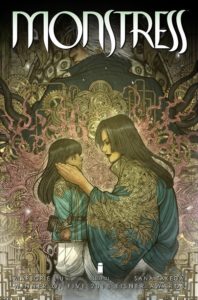 always-excellent Sean Phillips visuals, it’s got the usual careful plotting, noir atmosphere and unexpected twists that have made it so good in its various incarnations over the last dozen years.  B.P.R.D. reaches the penultimate issue of, not only its run, but the overall story of Hellboy (and, in all likelihood, his world itself), with a huge battle; if you’ve ever enjoyed the various Hellboy/B.P.R.D./Mignolaverse comics, get this, to catch the ending (not to mention the Mignola cover art) — and then buy the final installment, next month, for the aftermath and resolution.  Monstress keeps mentioning its five Eisner awards on the cover — and 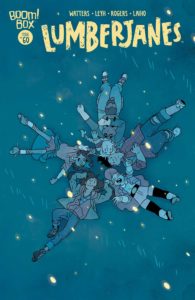 why not? — and benefiting from its combination of adventure, fantasy and fascinating characters.  Artist Sana Takeda, whose cover for Marvel’s Belit was the best of any of last week’s comics, just keeps getting better and better; pick this up and leaf through it, and see if at least a couple of pages don’t stop you in your tracks, and turn you into one of the comic’s growing number of devoted fans.  Lumberjanes is totally different in art style (cartoony-primitive to Monstress‘s realistic-manga-detailed) but has a similarly-enthusiastic readership; it concludes its current arc this week, marking five years/60 issues of dependable monthly kids’ comics, and comic racks everywhere are the better for it.

With 40 years of experience in comic reading, collecting and reviewing, English Professor Phil Mateer has an encyclopedic mind for comics. Feel free to ask Phil about storylines, characters, artists or for that matter, any comic book trivia. He will post your questions and answers on the AABC blog. His knowledge is unparalleled! He is also our warehouse manager, so if you are looking for that hard to find comic book, ask Phil!
View all posts by Phil →
This entry was posted in New Comics, Reviews and tagged Aquaman, Avengers, Batman, Captain Marvel, Criminal, Guardians of the Galaxy, Hellboy, Hulk, Invisible Kingdom, Lazarus: Risen, Lumberjanes, Meet The Skrulls, Miles Morales, Monstress, Naomi, Pearl, Spider-man, Teen Titans, The Wild Storm, Thor, Venom, West Coast Avengers, X-men. Bookmark the permalink.