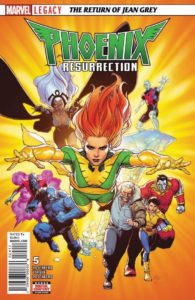 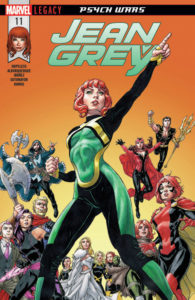 Phoenix: Resurrection ends (and this is the short, sort-of-spoilers-but-not-really version) without a “resurrection” of the Phoenix, but instead with the adult Jean Grey back, with her major-telepath powers intact but nothing else, just in time for her to lead the new X-Men: Red series starting next week. If Resurrection had been a monthly series, it might have been seen as too slow-moving and inconsequential (it’s basically just getting rid of the extra powers and resetting her back to a less cosmic level, after all); as a weekly series, though, its five issues only took one month instead of five, and so kept both the action level and reader interest high, and even managed to create a couple of nice emotional beats in this finale — meaning that Marvel will probably try more of these shorter, everything-in-the-can first events, and more power to them. X-Men: Red will replace Jean Grey, the book about the younger version of the character, whose last issue, #11, is also out this week; it covers the teen Jean’s encounter with the Phoenix Force, fixes the small problem of her death in the previous issue, and leaves her still as part of the time-traveling X-Men: 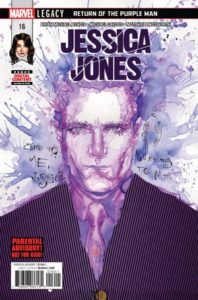 Blue team of younger mutants. Whether two versions of the same character, a teen and an adult, will be sustainable is a good question (ask Miles Morales…), but in the short term this looks like a smart move: X-Men: Red will certainly sell more copies than Jean Grey, at least for a while. There are other changes afoot at the House of Ideas, too, especially with Brian Michael Bendis, who’s been writing a half-dozen or so of their comics for a long time now, but will be taking his talents to DC in a few months (he’ll be taking over both Action and Superman, and bringing his creator-owned books like Powers and Scarlet with him). As if to underscore his importance, three of his current books are out this week; none are ending just yet, but all have just a couple of issues left under his authorship. Jessica Jones has usually been the best, because it’s right in his wheelhouse: gritty urban flawed-hero detective stories with super-powers mixed in, much like his original indy hit Powers.  Alias, his original run with the character with artist Michael Gaydos, was a cult favorite, and became much more when the Jessica got optioned for the hit Netflix show; 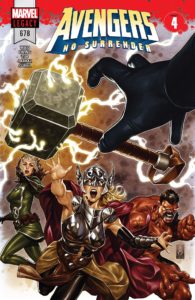 Bendis has always had a soft spot for her. The current arc involves the return of nemesis Killgrave, the Purple Man, and has the usual layered, impressionistic art and elements of horror; points for going off in an unexpected direction with it, and not just creating a rehash of the original Alias plot that became the backbone of the first season of the TV series.  Defenders is part of that TV universe, too, and so has been a logical book for Bendis to write — especially since, obviously, Jessica’s in it, too, along with the same cast as the show: Luke Cage, Daredevil and Iron Fist; it’s been following a gang-war story involving Diamondback, Hammerhead, the Black Cat and other Marvel mobsters, and while it’s not particularly original it’s a good example of Bendis’s value: solid plotting, great dialogue and a more realistic, street-level setting than many superhero comics, with a TV-friendly visual narrative style that should be comfortable for both fans of the show and more-established comics readers. Invincible Iron Man has special resonance for the writer, too — Riri Williams, the teenager from Chicago who’s been wearing a version of Tony Stark’s metal

suit for awhile, has resemblances to his adopted daughters, and he’s said he wanted them to have characters they could relate to — and she has a good scene in this issue, thinking her way out of a confrontation instead of punching; there’s also the continuation of  Doctor Doom (in his own version of the IM suit) fighting a legion of super-villains (drawn by Alex Maleev, continuing his run on Victor from Infamous Iron Man), and, of course, Tony himself, hiding out, recuperating from a near-death experience, and slowly getting ready for a dramatic return in, oh… let’s say four issues from now, at #600? That’s the last Bendis one, and a fitting anniversary highlight for a conclusion and a mic drop. 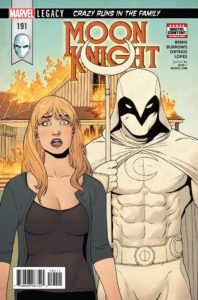 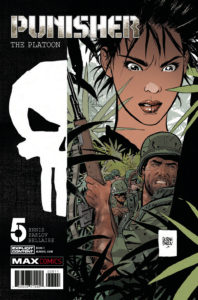 Moon Knight, under Max Bemis and Jacen Burrows, has become even crazier than usual (which, considering its multiple-personality hero, is saying a lot); Burrows, who 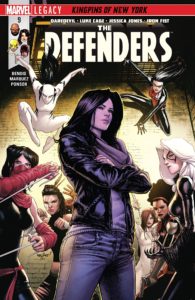 spent all those years drawing Crossed, has a simple, straightforward way of presenting weird people doing insanely terrible things to one another, and between the pyrokinetic who thinks he’s the incarnation of the Sun God, the guy who makes other people crazy just by being around him, and the supporting cast member who’s, apparently, now a zombie, Bemis gives him plenty of opportunity.  Punisher: Platoon continues to be Garth Ennis and Garlan Parlov doing Frank Castle on his first 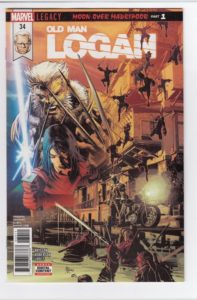 tour of duty in Vietnam, which is pretty much all you need to know about it, while Avengers, having stopped all its subsidiary titles (Uncanny Avengers, U.S. Avengers, Occupy Avengers, etc.) is now using the original franchise title to present a weekly epic about the Earth being stolen by competing alien bad guys acting at the behest of the Grandmaster: lots of characters, lots of plot and lots of action, with the weekly status, as in Phoenix: Resurrection, keeping it fresh. Old Man Logan has Logan and his old flame Mariko (well, not quite his, since he’s from an alternate 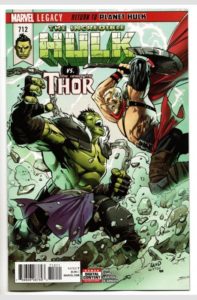 Earth, but close enough…) fighting ninjas in Madripoor; that’s a callback to the Canucklehead’s early solo adventures, and artist Ibraim Roberson is a surprisingly-decent replacement for Mike Deodato. Incredible Hulk has Greg Pak reprising his “Planet Hulk” storyline, except with Amadeus Cho still in the title role, struggling to maintain control over his gamma-fueled inner monster while being forced to fight Thor (the “unworthy,” son of Odin one) on a barbarian planet: Greg Land gets to draw a mostly full-issue Hulk/Thor battle, and acquits himself well — for a guy who started his career by mostly lightboxing photos from porn mags, he’s come a long way. 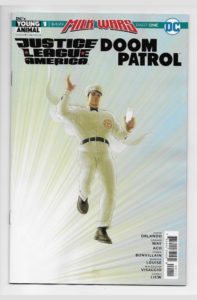 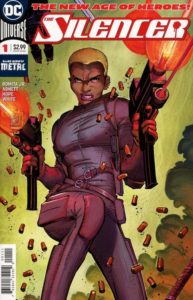 Gerard Way’s Young Animal imprint at DC has always wanted to be Vertigo in the ’90s, and in “Milk Wars,” those books’ crossover with the Justice League, he shows that he wants to be its Grant Morrison: he’s got Morrison’s big theme, about the cosmic battle between the forces of conformity and of free thought, and his ease at mixing underground weirdness with classic superhero tropes. If you haven’t given Shade or Mother Panic or Cave Carson or, especially, Doom Patrol 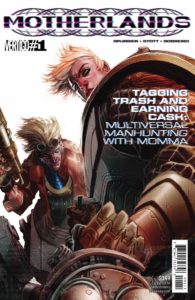 a try yet, get this comic and see if it changes your mind. The Silencer, the second of DC’s “New Age of Heroes” books, involves a former assassin who’s now a wife and mother, who gets pulled back into the business; that’s not exactly original (Assassinistas, the Tini Howard/Gilbert Hernandez comic that debuted a couple of months ago, has the same basic plot — although they both owe a debt to Kill Bill), but more than enough to let John Romita Jr.’s beautiful people and sleek action scenes carry the show.  Motherlands is an sf comic from Vertigo about being able to travel between parallel universes (they call them “strings”), and a daughter who chases fugitives across

them — as her mother did. Spurrier is a dependably clever writer, and he’s worked out the concept well, using it to anchor a plot about family relationships and obligations that’s soap opera-y enough to hold our attention.  The Flash Annual is the prologue to the regular title’s next big arc, “Flash War,” wherein the various speedsters get manipulated (by a major Rogues Gallery villain) into fighting one another; Joshua Williamson’s quietly been making Flash one of the steadiest, most reliably-entertaining of the “Rebirth” titles (helped considerably by regular series artist Carmine  Di Giandomenico, although Howard Porter is a solid substitute here), and this is a good chance to check it out. 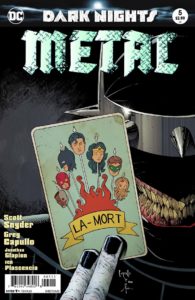 Dark Nights: Metal is on its penultimate chapter, so anything I say about it at this point is probably useless, right? You’re either reading it or not. I will say that it covers 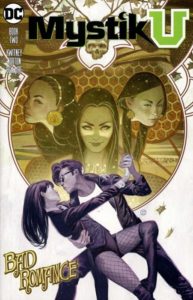 a number of subplots with Superman, Batman and the other Justice League members, and that obviously things don’t go all that smoothly for everyone (or, well, practically anyone), but that’s the nature of penultimate issues. The story shifts to the one-shot Dark Nights Rising: The Wild Hunt in February, so the conclusion won’t be here until sometime in March; considering its sales success so far, it’s clear that almost everyone will be back for it then.  Mystik U is sort of like Gotham Academy crossed with Harry Potter, since its students are college age, and all being trained as magic users; it’s not quite in continuity, since it’s got teen versions of Zatanna, Sargon, Felix Faust and other DC mystics, but they kind of explained that in the first issue. It’s a decent 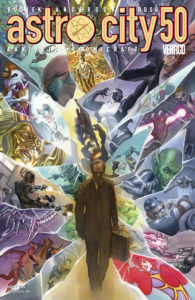 mix of YA themes and regular DC continuity, and there’s a decent story in there, so if it can attract fans of both genres it has a shot; so far, it’s interesting enough for readers to stick around for at least the first arc. Astro City hits the 50th episode of its current incarnation (counting them all, it’s actually #109), and offers a callback to one of its earliest, and most popular, tales, from the special 1/2 issue, about a guy whose love of his life had just… disappeared, winked out of existence during one of those comic-book cosmic resets — except that he still remembered her. What he’s doing now, over a decade later, is surprising, logical, hopeful, a little sad and very human — which makes it a typical Astro City story, and all the more reason to get it. 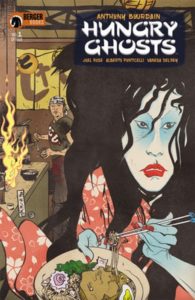 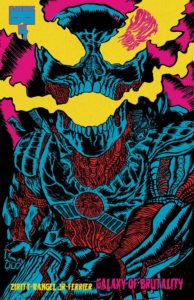 Hungry Ghosts is a horror anthology adopting classic Japanese Edo ghost stories, by a variety of artists; this first issue has three tales, two drawn by Albert Ponticelli and one by Vanessa Del Ray, plus a cover by Paul Pope; even if you aren’t a horror or manga fan, that lineup should be enough to get you to check it out. Galaxy of Brutality is what we might have gotten if Jack Kirby had been born 30 years later and become an underground comics artist; it’s got his raw, punch-in-the-face vitality and cosmic space scope, mixed with the transgressive 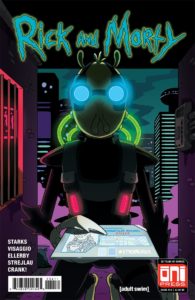 dialogue and primitive style (not to mention the Day-Glo colors) of the UG creators. The primitiveness means it isn’t for everyone, but try it: there’s certainly nothing else on the stands like it.  Rick and Morty‘s main story is about an alien hitman who loves killing, and uses Rick as a weapons supplier. The last few issues have been taking experimental narrative paths, and this one’s no exception; it’s told from the hitman’s perspective, and since using Rick for anything is likely to end badly, you can guess the outcome: fans of the show, or other sociopaths (and I’m counting myself in that group, so it’s not meant as an insult…) should like it just fine.

With 40 years of experience in comic reading, collecting and reviewing, English Professor Phil Mateer has an encyclopedic mind for comics. Feel free to ask Phil about storylines, characters, artists or for that matter, any comic book trivia. He will post your questions and answers on the AABC blog. His knowledge is unparalleled! He is also our warehouse manager, so if you are looking for that hard to find comic book, ask Phil!
View all posts by Phil →
This entry was posted in New Comics, Reviews and tagged Astro City, Avengers, Dark Nights Metal, Defenders, Doom Patrol, Flash, Galaxy of Brutality, Hulk, Hungry Ghosts, Iron Man, Jessica Jones, Moon Knight, Motherlands, Mystik U, Old Man Logan, Phoenix, Punisher, Rick and Morty, Silencer, X-men. Bookmark the permalink.