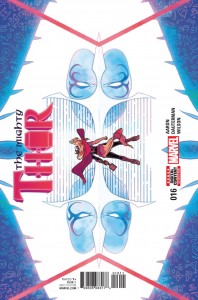 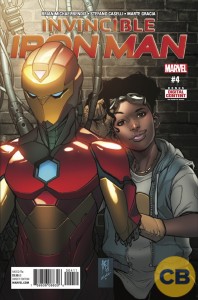 In Mighty Thor, the Jane Foster Thor, having been kidnapped by the Shi’ar, is taken to the gods of that race, where they inform her of their omnipotence and demonstrate their unimaginable power, and she threatens to kick their asses; that stubborn, automatic bravery in the face of impossible odds is just what made the Kirby/Lee Thor so good, and it’s almost as entertaining here.  Iron Man does something 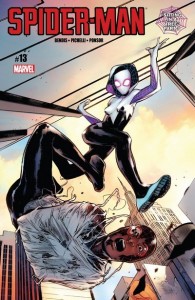 similar, though on a less-cosmic scale, as an armored Riri encounters an armored Pepper Potts, and their conversation (joined by her suit’s operating system, an A.I. version of Tony Stark) is cut short by techno-ninjas; this all has a certain surreal inevitability to it, and watching a de-powered Riri calmly assess the threats, marshal her forces and solve the cascading problems of how-not-to-die is a lot of fun, and a showcase of her potential. Bendis, her creator, is spotlighting another strong female in Spider-Man, as Miles continues to recount his other-dimensional 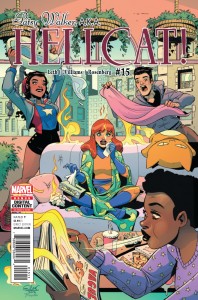 adventure with the Gwen Stacy version of Spider-Man; dialogue is always a Bendis strength, and listening to the two characters banter and bond is the best part of the book (this quiet little six-part crossover between the Spider-Man and Spider-Gwen titles has played to their strengths, and enhanced both characters; it’s been a welcome change from the big bombastic universe-shattering crossovers that we usually get). Hellcat, meanwhile, is a perfect example of Marvel’s increasingly-high-quality approach to the YA market: artist Brittney Williams (Goldie Vance) goes really manga-y/cartoony on the humor parts, to great effect, and the Leth 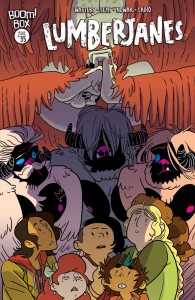 script stays“ true to continuity while offering a colorful, flawed, feisty and downright-adorable character with a supporting cast worthy of a classic sit-com. Mainstream superhero purist/realists may recoil from books like this, but they’re missing one of the bright futures of comics when they do. So too with Lumberjanes, reaching its 35th issue as a trailblazer of the genre, with its sharply-drawn scouts who mix realistic relationships with brightly-colored, brainy adventures:  as with all the books in this first group. they’re good stories, no matter your age or gender, with this week’s issues good jumping-on points. 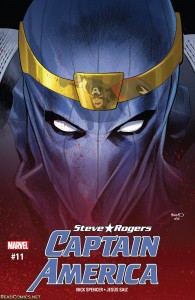 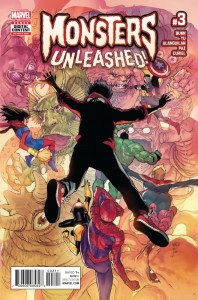 Of the regular Marvel books, Steve Rogers: Captain America is important because it’s setting the stage for the company’s big spring crossover, Secret Empire, where a Cosmic Cube-altered Cap has had his past retconned, and is now a Hydra plant — who’s just been put in charge of S.H.I.E.L.D. (a high government official conspiring with a hostile foreign power to affect the US: where do they get these unrealistic plots…?). In some hands, this would be silly, but Spencer’s been good at keeping the character recognizably himself, but with a different set of life circumstances, and since Cap has always been the Marvel 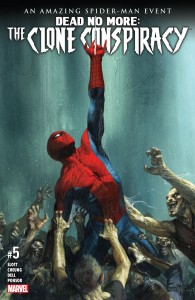 Universe’s Batman — the unbeatable, never-give-up avatar — pitting him against basically everyone else might actually be fun; we’ll see. Monsters Unleashed is now at its midway point, with the overall plot revealed: the classic Marvel monsters joining with the good guys (compelled by an eleven-year-old Inhuman who can summon them by drawing them) to fight a horde of huge Lovecraftian planet-invading much-worse monsters. Decent art, and I like the way Moon Girl shows up, bonds with the other kid, immediately starts to figure out the parameters and solutions of the problem, and gets completely ignored by the relatively-clueless adults. Plus: Elsa #@$%ing Bloodstone, monster hunter 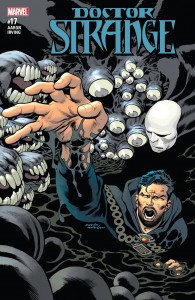 and potty-mouth extraordinaire, who’s always fun. Meanwhile, the Spider-Man Clone Conspiracy wraps up satisfyingly,  Dan Slott has such a knack for these kinds of sprawling mini-epics (see: Spiderverse) that entertained fans might not even realize how cleverly he’s managed to create a high-stakes, dozens-of-characters story and still put (almost) everything neatly back into place afterwards; only those who wanted all those returned-from-the-dead characters to actually stick around might feel some disappointment. Doctor Strange is wrapping up its all-the-bad-guys-fight-Doc-at-once arc, as now there’s just the Misery-possessed Wong to cause (still-considerable)

trouble; regular artist Chris Bachalo is missed, but Frazer Irving’s dreamlike drawing and cool coloring are a good fit — and writer Aaron ends with the introduction of a familiar guest-star from one of his other books, which should keep everyone coming back next month. The Ultimates2 continues to be Marvel’s most-cosmic comic, beating out even Silver Surfer in its use of huge concept entities — Eternity, Galactus, Chaos and Order, etc. — to keep its high-powered, formidable team of heroes busy; it should get some sort of award for the most chilling last page of the week. 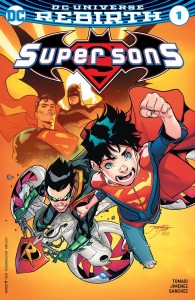 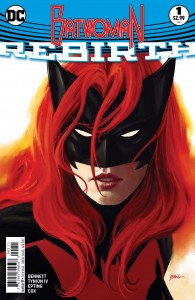 cuteness; also, it’s fun to watch how the kids reflect their parents, from Damian’s annoying ultra-competence (and self-absorption) to Jon’s compulsion to stand up for what’s right and occasional naivety. Mix that in with the kids’ swinging between tentative friendship and instinctive dislike of one another, and it looks like DC might have a winning combination here. Batwoman: Rebirth does its intro-issue job, with a look at the character’s history (fairly tangled, for such a relatively-new arrival); Steve Epting’s normal photo-realistic style works well, especially since he tempers it with a hint of the experimental layouts and lushness that J.H. Williams III used to such good effect during the character’s initial appearances;  this should be satisfactory 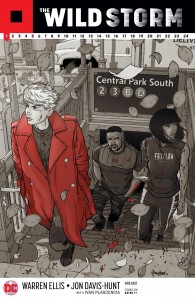 to the readers who’ve made Kate Kane something of a cult favorite. The Wild Storm seems like the dozenth attempt to relaunch the Wildstorm superhero universe over the last decade, but this time it has the advantage of Warren Ellis, a writer who combines a fertile imagination with a hardnosed worldview and a canny sense of what will attract an audience; D.C.’s reportedly given him a long leash on this, and the first issue, offering dark-ops assassination attempts and altered relationships, while retaining the broad-stroke backgrounds for most of the principles, is an encouraging start. 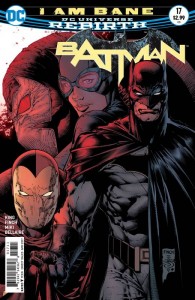 In Batman, Bane, having been beaten by the Caped Crusader on his home-turf island, comes to Gotham to return the favor. We’re in the early, chess-match-maneuvering stage so far, with more active battles to come, but King gives Finch plenty of cool characters and backgrounds to draw, including one show-offy double-page splash, and this title continues its run 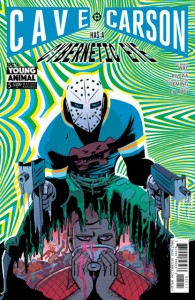 of high-payoff storytelling. Cave Carson, despite Oeming’s indy-style exaggerated art, might be the most traditional of the Young Animal titles (I just realized this week that “Young Animal” was a play on the “YA/Young Adult” market that everyone’s wooing…), with this issue adding backgrounds and revelations, and moving all the pieces into place for a big trade-collection-ending climactic fight next month; it’s a solid story, one that makes good use of its damaged but heroic characters, and it’s no coincidence that it’s been the most dependably-published of the YA series, too — with all the issues still available at cover price, it’s definitely worth seeking out. 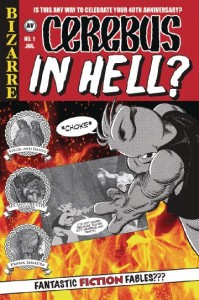 Of the brand-new or recently-launched indy books, Cerebus in Hell? is the second (there was a “0” issue) of Dave Sims’s five-issue mini-series about his signature character. Sims isn’t able to draw because of wrist ailments, so he’s photoshopping old poses of the irascible aardvark into Gustave Dore’s paintings of Hell (since Cerebus, having died at the end of his 300th issue, 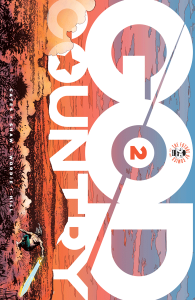 may or may not have ended up there (there is that question mark in the title…)); the result is played for laughs, in a series of four-panel Sunday-comics-style pages. Sims always had a way with a punchline — his versions of comedians like Groucho Marx and the Three Stooges were always wandering through Cerebus, and their dead-on dialogue, combined with atomic-clock timing, made them work — so this is funny; if you’ve never read Cerebus, this comic will have no meaning for you, but if you were ever a fan then you really ought to get it. God Country involves a senile old man in Texas who stumbles across/is chosen by a sentient universe-shattering sword; when he’s holding it, he’s strong and  can remember everything, but if he lets it go he’ll 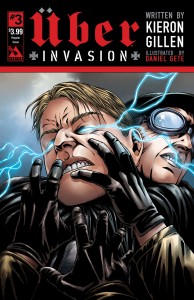 revert to his Alzheimer’s-addled former self — and now the sword’s former owner is coming to Earth to get it back…. This is an intriguing set-up, and combined with the detailed, Sean Murphy-like art it’s yet another worthwhile sf/fantasy comic from Image. Uber: Invasion continues the second volume of Kieron Gillen’s what-if-the-Nazis-had-discovered-super-powers WWII alternate-history epic, with the US being invaded and the seemingly-won war turning in Germany’s favor; Gillen’s extensive real-world WWII research, and his unblinking look at the horrors of war (made, of course, worse by the powers) make this much better than the B-movie premise might suggest. 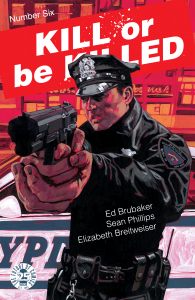 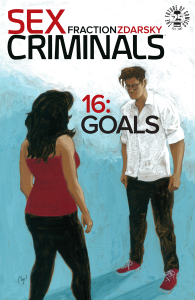 Kill or Be Killed is the latest Ed Brubaker/Sean Phillips crime series, about a schlubby guy cursed by a demon (maybe… probably…) to kill one person every month, or be sent to hell himself. The supernatural part is underplayed in favor of the practical problem of finding someone deserving to die every month, and developing the athletic and mental skills to kill them 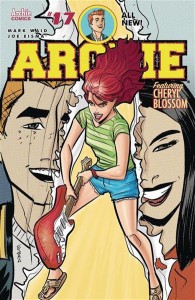 without getting caught, and so far that aspect of the comic has been fascinating and entertaining (in its own dark way). Sex Criminals returns from a hiatus to pick up its tale of people who find that, when they have an orgasm, time literally stops; Fraction and Zdarsky provide an eight-page recap for new readers, plus a regular-sized new story, so it’s a great jumping-on point (insert your 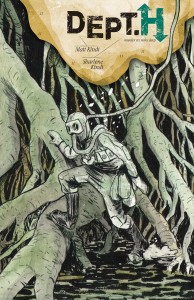 own sex joke here…), and a typical example of the humor, relationship drama, and unexpected humanism and grace that have been such a big part of this title’s success.  Archie introduces Cheryl Blossom to Riverdale, making the book’s eternal love triangle some kind of parallelogram instead.  Mark Waid has created a new-looking universe, but its talk-to-the-reader ’60s style is so familiar too that this script could have been drawn by Dan DeCarlo; it’s a worthy continuation of these characters. Dept.H gets quite a bit of both back- and current story in; it’s in the middle of things, but a new reader might actually find its direct style, dreamy watercolors and DIY ethic appealing.

With 40 years of experience in comic reading, collecting and reviewing, English Professor Phil Mateer has an encyclopedic mind for comics. Feel free to ask Phil about storylines, characters, artists or for that matter, any comic book trivia. He will post your questions and answers on the AABC blog. His knowledge is unparalleled! He is also our warehouse manager, so if you are looking for that hard to find comic book, ask Phil!
View all posts by Phil →
This entry was posted in New Comics, Reviews and tagged Archie, Batman, Batwoman, Captain America, Cave Carson, Cerebus, Dept.H., Doctor Strange, Hellcat, Iron Man, Kill or be Killed, Lumberjanes, Monsters Unleashed, Sex Criminals, Spider-man, Super Sons, Thor, Uber. Bookmark the permalink.