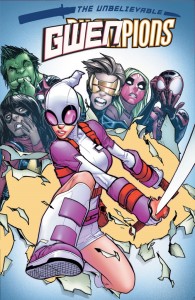 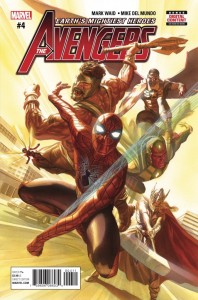 Mark Waid’s writing both the regular Avengers book and the Champions younger-heroes spinoff of it, and showing his scripting versatility by accommodating two very different artists and styles. Over in Champions, Waid’s hitting a cultural wave, with its themes of standing up to racism, bullying and tyranny, and Humberto Ramos’s sharp-edged cartoony style works well with the idealistic teens who make up the group. The guest star this issue, Gwenpool, helps to illustrate the difference between Champions and most regular superhero comics; because she comes from “our” Earth and knows she’s in a superhero universe, she assumes that the racist county sheriff who drives the plot here is actually part of some group like Hydra, or the Sons of the Serpent, or is being influenced in his beliefs by the Hatemonger of Mesmero or some other psychic. 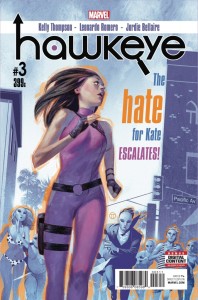 That’s how comics work, right? Nope — he’s just a racist who got a lot of gullible people to vote for him, and now is using his power to make life tough for minorities. Gwenpool’s looking for someone to punch, but the theme of Champions is that sometimes punching doesn’t do any good, and that winning the hearts and minds of voters, showing them the truth about whom they’ve elected, is the harder but, ultimately, only right way to solve the problem: a particularly potent political point right now. The Avengers is much different: a deep dive into the mind and history of Kang the Conqueror, on the eve of a massive battle against the heroes . Mike del Mundo’s painterly, expressionistic pastel/neon art shows off to great effect here, with lots of splash pages and dreamlike collages; this is a great-looking comic, and one whose focus on the bad 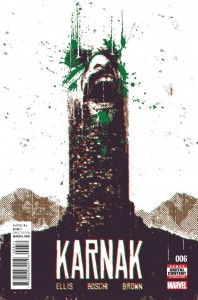 guy’s character enhances the inevitable punching considerably.  The Unstoppable Wasp emphasizes   a bright, shiny, modern take on its girl-genius science heroine, who’s recruiting other girl geniuses to run a lab with her; it makes sense that Moon Girl guest stars, since the two books aim for similar audiences. So does Hawkeye, which strikes a similar tone with its LA-based private-eye heroine, as her seemingly-simple investigation of a stalker has spiraled into pursuit by a mind-control cult with much larger implications; this is a smart, fun action comic, much like its Matt Fraction-written predecessor, and everyone should be checking it out while the first three issues are still on the stands. Karnak is very late with its conclusion to its six-issue run, as the man who can find the flaw in anything goes up against a child who can discern the heart’s desire of anyone, and give it to them; it ends badly for all concerned — but satisfyingly for readers — making it a typical Warren Ellis book. Monsters Unleashed continues to be a big spotlight-all-the-characters-and-why-they’re cool event book, and as a primer on the company’s cast it’s pretty good: last 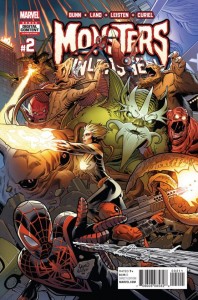 issue spotlighted the big names, the Avengers and X-Men and Inhumans, and this one showcases Captain Marvel and Alpha Flight, the Guardians of the Galaxy, and then everybody together, with nods to the two Spider-Men, Deadpool, etc.  They’re all fighting big Lovecraftian elder-gods monsters, which are raining down on the planet and may or may not be connected to all those Lee/Kirby/Ditko pre-superhero monsters who also show up. With lots of splash pages and power poses, it’s a big dumb popcorn movie, and if I was twelve years old and had never read a Marvel comic, it’d make me want to read more. 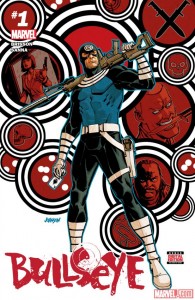 I didn’t lead with these four Marvel first issues because they’re two mini-series and two one-shot reprints — which is not to say that they’re worthless. Darth Maul is, duh, for Star Wars fans; the lead story is perfectly OK, with some nice alien/sf art, but the unexpected treat is the ten-page second story, by Chris Eliopoulos, set on Tatooine during Star Wars: Episode One and involving mostly-wordless droids. The 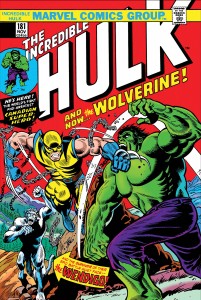 cartoony style combines Eliopoulos’s expert composition with beautiful coloring by Jordie Bellaire to create a stylish, cool=looking story. Bullseye is about what you’d expect for a comic about a psycho mercenary, and if you like that sort of thing, it does it reasonably well. It, too, is enhanced by a back-up story, this one by the character’s creator, Marv Wolfman, and artist Alec Morgan, and it’s a stripped-down thriller that earns its violent, and deadly, conclusion.That leaves the two True Believers reprints, both of key 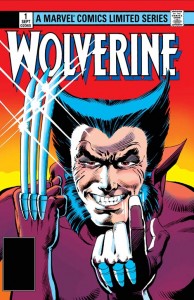 Wolverine comics (there’s a movie coming out…), and they’re great deals: a Hulk 181 first-appearance reprint with sharp reproduction and color, looking better than it did when it originally appeared on the stands in 1975, and a reprint of the Chris Claremont/Frank Miller Wolverine mini-series #1, the Canuck’s first solo title, with those two creators just coming into their maturity and everyone else starting to realize how good they were. These two comics are one dollar each, so if you don’t have them already there’s no excuse to pass them up (they’d make great cheap gifts to that twelve-year-old who liked Monsters Unleashed…). 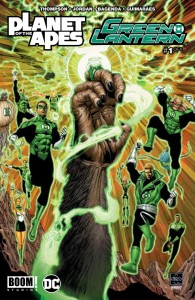 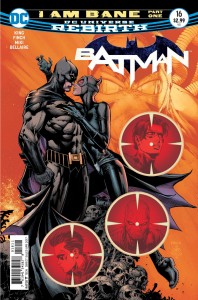 The Planet of the Apes/Green Lantern issue is one of those comic series you either want immediately upon hearing the title… or don’t. It involves Cornelius (one of the good-guy apes) finding a mysterious ring that, when placed on his finger, sets off a “crosschronal disruption” that sends the Green Lantern Corps — and Sinestro — racing to his dimension. It doesn’t quite fit into current GL continuity (the Sinestro here is still leader of the Yellow Lanterns, for one thing, and the Guardians 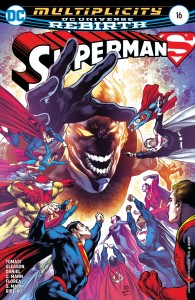 still seem to all be on Oa, and their usual opaque selves), but it’s competent enough; as a mashup, it isn’t quite as on the nose as Tarzan on the Planet of the Apes, but fans of either, or both, franchises will be happy with it.  Batman is beginning a revenge-of-Bane arc; as usual with King, it involves a skillful mix of elements and characters — Catwoman, Nightwing, Damian, Duke, Gotham Girl — and a shocking cliffhanger (so shocking that we know it can’t really be true, although it still brings a chill). David Finch has been drawing the bat-people for a number of years now, and has just the right combination of shadows and realism to make them work visually; he really does nail that last-page splash, too. Superman, meanwhile, wraps up a multiversity arc, with Supermen

and women (and one rabbit…) from across the dimensions gathering with the Grant Morrison Justice League Incarnate to fight a foe who’s capturing them and taking all of their powers, in order to fight an even-bigger menace. Lots of hints about the meta-structure of the current DC universes, and the place of “our” Superman in them, so it’s a useful story for serious DC fans. Harley Quinn concludes its own three-parter, about the Joker showing up to woo our… well, not quite “heroine,” but main character, and it’s as dark as you might suspect, but in an unexpected direction; I continue to be impressed with the ways Connor and Palmiotti make Ms. Quinn unpredictable, relatable,

human and crazy scary, sometimes all on the same page. Justice League offers a couple of pages of Bryan Hitch art this issue (instead of just his normal writing job on it), and it’s a done-in-one tale, opening with an already-defeated League regrouping and planning before confronting a planet-sized enemy.  It’s one of those mostly-conversation change-of-pace issues that’s surprisingly effective, largely because a lot of the conversation is about the League and the new-to-them Superman coming to terms with one another; like this week’s Superman, it gives us a look at some of the broader aspects and relationships of the “Rebirth” universe, and is worth a look just for that. 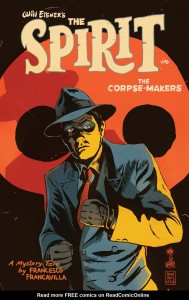 Will Eisner’s The Spirit: The Corpse Makers #1 (of 5) — Creator: Francesco Francavilla 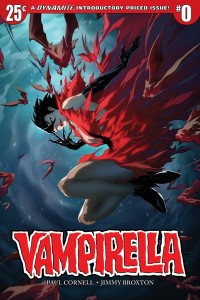 Spirit #1 is a complete production by the great Francesco Francavilla (ironically, on the inside front cover crediting him with the writing, art and lettering, they spell his name wrong…), who gives us the start to a shadowy murder mystery. The art does a good job of hinting at Will Eisner’s influence while still being recognizably Francavilla’s, and the five- 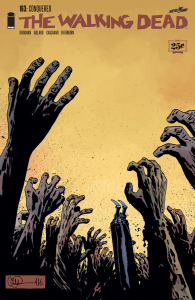 issue mini-series format seems just about right; this is a hard comic to pass up. Vampirella starts a new volume with Vampi long-dead in a future-Earth dystopia, and a small band of rebels looking for her coffin; it’s not too much of a spoiler to say that they’ll find and revive her by the end of this issue. Broxton gets a couple of splash pages of her, and does a nice job with them, and the character’s many fans should find this a satisfying start to her new adventures.  Planetoid: Praxis is a sequel to Garing’s 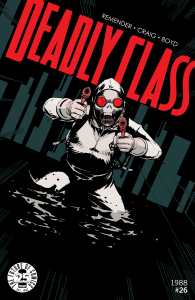 Planetoid Image sf mini-series of a few years ago, with the planetoid in question having an E.M. radiation field that makes any ship that enters its atmosphere crash, isolating its residents from the rest of the universe, with both good and bad results. This first issue sees an arrival who sets up a possible change to that status quo, and creates a moral crisis in the planetoid’s inhabitants… some of them, anyway; it’s a smart and character-centric story, and if you like some of Image’s other creator-owned sf books, you’ll probably like this one too. Of the

already-ongoing titles, The Walking Dead is worth noting, first, because as part of Image’s 25th anniversary celebration it’s only 25 cents, for 28 pages of story that launches a new arc, involves a sea of tens of thousands of zombies, and is a great jumping-on point for new readers — and did I mention, it’s only 25 cents? Considering that it’s more than entertaining enough to justify its regular cover price, there’s really no reason not to get this comic. Deadly Class offers a game-changer too, with Maria caught and tortured by her highly-dysfunctional family, and an attempted rescue by another cast member that… well, you’ll have to read it, but I guarantee that if you’re already a fan of this title, you’ll like it. A lot. Paper Girls

sees its title crew time-tossed and trapped in the distant past; like Saga, it combines careful, detailed, good-looking art with Brian K. Vaughan’s trademark plot twists, character-rich story and slam-bang action. That leaves Goldie Vance, Nancy Drew as a biracial young heroine living an idyllic existence in Florida in the early ’60s, solving mysteries and drag-racing and having sharply-drawn, YA-friendly, very well written adventures; Boom’s got a number of similar titles, including Lumberjanes, Backstagers, Jonesy and Giant Days, offbeat semi-cult all-ages books that are clever, heartfelt and well worth checking out.

With 40 years of experience in comic reading, collecting and reviewing, English Professor Phil Mateer has an encyclopedic mind for comics. Feel free to ask Phil about storylines, characters, artists or for that matter, any comic book trivia. He will post your questions and answers on the AABC blog. His knowledge is unparalleled! He is also our warehouse manager, so if you are looking for that hard to find comic book, ask Phil!
View all posts by Phil →
This entry was posted in New Comics, Reviews. Bookmark the permalink.