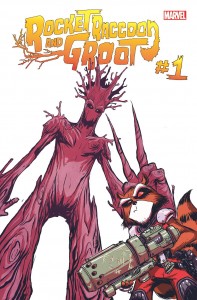 Only two Marvel first issues this week, and they’re both retreads — Rocket Raccoon and Groot is by last year’s Rocket Raccoon creative team, which is good: Young, especially, has a knack for acid- 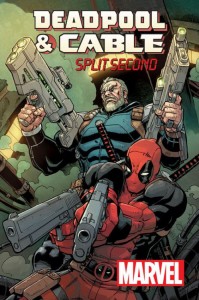 tinged, off-kilter cuteness (see his I Hate Fairyland), and it mixes well with the space opera here.  My only complaint is that it’s an odd choice of story for a first issue, with the “real” versions of the characters never appearing (maybe because it was originally going to be Rocket Raccoon #12?), and so isn’t the best introduction for new readers. Deadpool and Cable doesn’t have that problem — this character team-up is comfortable territory for both Nicieza and Brown, and they offer an easy, smoothly-professional first chapter of their mini-series that’s accessible to anyone. 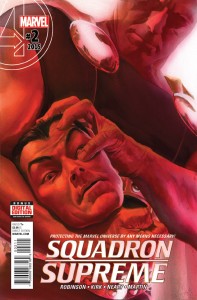 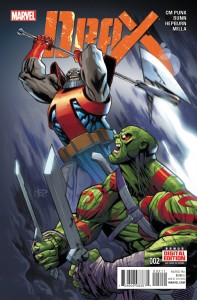 Three second issues: Squadron Supreme, having spent their first issue establishing their toughness by decapitating the Sub-Mariner, are now, to judge by the cover, using his head as a bowling ball. Sadly, that scene never plays out inside; it’s mostly a getting-to-know-the-group exercise in world building, with a last-page appearance by the guys they’re going to fight next issue. Call it a push: it doesn’t make you more likely to keep buying this book, 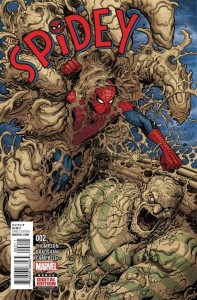 but it doesn’t make you less likely either.  Drax, on the other hand, is a bit better with its chapter two, as, instead of the cover scene of its title character fighting an axe-wielding alien, the two team up, and hang out in lowlife space bars and investigate a mystery; that’s a much better set-up for luring readers back again. Spidey might be the best of the three — two issues in, it’s already realized that Peter Parker in high school should be fun, and here presents a brisk done-in-one-issue all-ages tale that makes a perfect introduction for curious new fans. 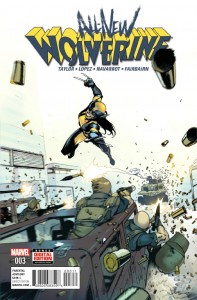 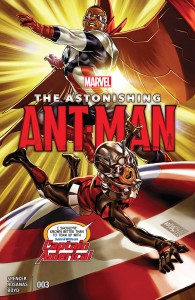 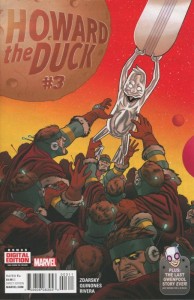 … And six number threes:  I’m finding it hard to get into All-New Wolverine‘s clone-centric plot, and it doesn’t use the Taskmaster very well, but the Lopez art makes it worth reading.  Astonishing Ant-Man does the opposite: the art’s only so-so (although the cover’s good: just look above and to the left there), but Spencer’s got an appealing light touch, and since he’s also the writer on Sam Wilson: Captain America the characters’ team-up, 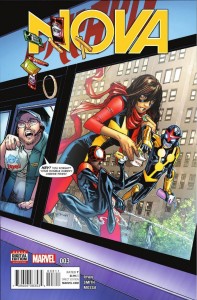 and friendship, seem unforced and natural. Howard the Duck‘s got pretty-good art and even-better writing; Chip Zdarsky, best known up to now as the artist on Sex Criminals, has a fan’s appreciation for Howard (much as he does for Archie Comics’s Jughead, whose book he’s also writing); you can tell by all the ’70s callbacks , and the way he gets the duck’s beleaguered, sarcastic dialogue to ring true. There’s also the ten-page Gwenpool/Howard back-up story, for which you’re paying an extra 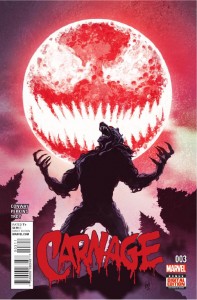 buck.  Nova is for fans of  All-New Avengers by Mark Waid, as Sam teams up with Ms. Marvel and the Miles Morales Spider-Man to discover what’s making the Mole Man so pissy.  Carnage now has the title character loose in an abandoned, collapsed mine with a bunch of FBI agents, the Man-Wolf, and Eddie Brock/Toxin, plus a traitor working for someone else, all of which is a lot of plates for even an old pro like Gerry Conway to keep spinning; that’s another cool cover, though, and there’s some nice art inside the book, too. 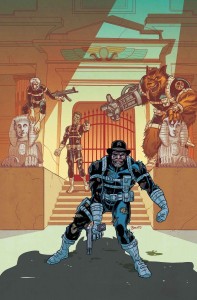 Howling Commandos of S.H.I.E.L.D. is a monster team-up book, with Dum Dum Dugan switching his consciousness between robot bodies and commanding a werewolf, a female vampire, a zombie (the now-dead former S.H.I.E.L.D. agent Jasper Sitwell) and, for no easily-apparent reason, Hit Monkey. Plus, one of those big Jack Kirby pre-superhero alien guys, Orrgo, is their intel/communications connection. Despite a certain arch coolness, this is less interesting than it sounds, at least so far, and the fourth issue’s going to have to be pretty unexpectedly spectacular to get me to keep buying it. 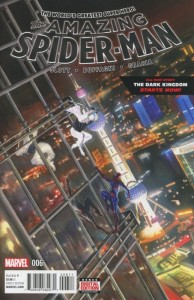 The last two Marvels: Amazing Spider-Man continues to be just the kind of straight-ahead, 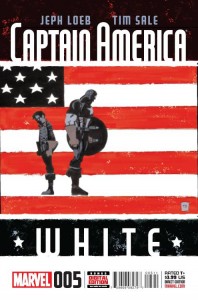 subplot-and-action-loaded superhero book you want for one of the company’s franchise characters, while Captain America: White is the conclusion of Loeb and Sales’s WW II-era Cap/Bucky/Sgt. Fury-vs.-the-Red-Skull serial, enlivened by Sales’s crisp retro art (although after reading the whole thing, I’m still not sure why they picked “White” for their color, as opposed to “Red,” “Blue” or, maybe best, “Star-Spangled….”) 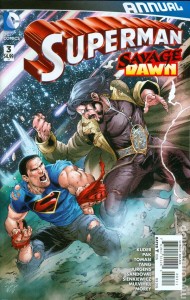 Only two DCs; if last week was the Bat-books, this week is more Superman, with Superman/Wonder Woman releasing both a regular issue and an annual too — but the Superman Annual is more connected to the big crossover Clark-lost-his-powers plot, and helps to set up 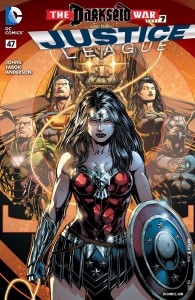 what looks to be a big Vandal Savage-fueled endgame; just don’t expect it to offer a complete story by itself, or to present a seamless reading experience with all those creators involved.  Justice League is deep into its own continuity, too, on part seven of a who-knows-how-long story about Darkseid dying and the JL taking on the powers of some of the New Gods; it will likely be good when read all at once in trade form, but it’s been slow going dribbled out in small monthly installments like these, however cool it is to watch Johns put the group through its various transformations. 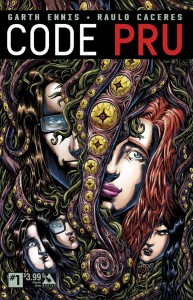 Three comics written by Garth Ennis (and his A Train Called Love came out last week, too: that’s a prolific writer); Code Pru‘s the outlier; it’s billed as a “black humor horror book,” and has a cast of four 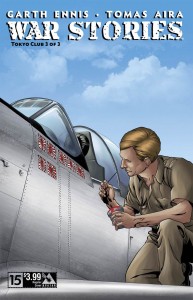 women roommates: the levelheaded scientist and reader stand-in, the mean bimbo into witchcraft, and two idiots. There’s also a C’thulhuvian entity with a mysterious jailer, and presumably these will all interact in later issues. Fine if you’re an Ennis fan, especially of his kind of good-humored semi-outrageous style. Caceres is a good choice for a black-and-white horror book: he’s got a shadowy line and an obsession for detail, and while his figures and faces aren’t always exact his design sense makes them work; he’s especially great with the many-tentacled, many-eyed elder

god, where he can create a kind of symmetrical alien beauty without having to worry about human anatomy. War Stories and Dreaming Eagles are both war books, an Ennis specialty: War Stories has the conclusion of a three-parter about US long-range bombers in the Pacific theater near the end of WW II, while Dreaming Eagles is the debut of a series about the Tuskogee Airmen, framed around a father explaining his role in them to his angry-young-man son in 1966; it’s got the sense of history, and of the small crucial human interactions that compose it, that’s Ennis at his best. 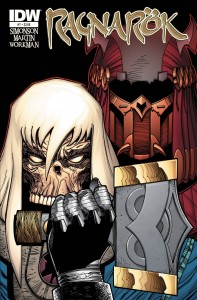 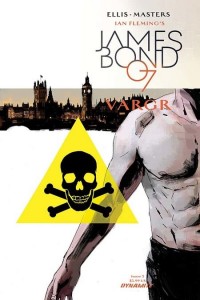 The best of everything else: Ragnarok is Walt Simonson doing Thor, unencumbered by company continuity and at his own pace, with a long-dead Thunder God having been reanimated,

and finding himself one of only a few Asgardians in a shattered world. If you have fond memories of Simonson’s Thor run in the ’80s, you need to be reading this criminally-underordered comic book. James Bond is Warren Ellis doing slick modern super-spying, with deadly designer drugs, gritty warehouse punch-ups, insane assassins and other pleasures of the genre.  Jughead, interestingly, touches on some of that too; Chip Zdarsky’s been adding daydream sequences to each issue that call back to some of his title character’s more obscure 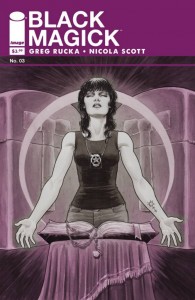 incarnations, and here it’s the ’60s Man From R.I.V.E.R.D.A.L.E. tribute that provides super-spy action. The main story continues the spiky-capped high-schooler’s battle against a mysterious new principle and coach, who seem up to no good; the great Erica Henderson sells it effortlessly, with snappy, effective cool. That leaves Black Magik, a Rucka police procedural grafted on to a world-spanning Wiccan occult thriller: a smooth, entertaining story enhanced by Scott’s low-key, careful realism and ability to draw good-looking people doing believable things.

With 40 years of experience in comic reading, collecting and reviewing, English Professor Phil Mateer has an encyclopedic mind for comics. Feel free to ask Phil about storylines, characters, artists or for that matter, any comic book trivia. He will post your questions and answers on the AABC blog. His knowledge is unparalleled! He is also our warehouse manager, so if you are looking for that hard to find comic book, ask Phil!
View all posts by Phil →
This entry was posted in New Comics, Reviews and tagged Ant-Man, Black Magik, Captain America, Carnage, Code Pru, Deadpool and Cable, Drax, Dreaming Eagles, James Bond, Jughead, Justice League, Ragnarok, Squadron Supreme, Superman, War Stories, Wolverine. Bookmark the permalink.