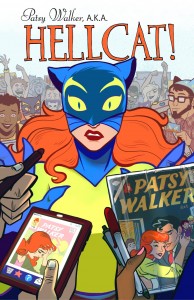 We were talking about comics friendly to girls and women last week, and these first three Marvel offerings qualify, too — Hellcat, for example, really wants to be Batgirl, with its 20-something hip urban protagonist, its manga-cartoony art, its consciously-diverse cast and its cool-clubhouse group of super-friends (and even their foes). Leth, who started out with her own webcomic and cut her professional teeth on a number of Adventure Time-related books, has a lot of 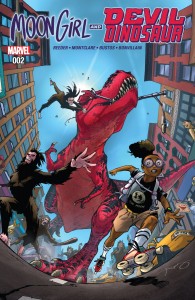 past continuity and current set-up to establish here, and does it breezily and well, while Williams’s art and Wilson’s coloring have a bright, simple attractiveness that could make this book a hit — if it can just get enough readers to sample it. Moon Girl and Devil Dinosaur has that problem, too — it’s aimed at younger readers, with its spunky, inventive pre-teen narrator and her big red toothy… well, not “friend” yet, but you know they’ll get there eventually, and a lot of readers would like its Scooby-Doo-on-steroids co-star and energetic-adventure tone if they gave it a try. For a young modern audience, that probably won’t come so much from the monthly floppy pamphlets as from digital downloads and trade paperback collections, so it’ll be interesting to see how much Marvel promotes this book in those areas; you can do your part by buying the comic, keeping it afloat, and getting it into 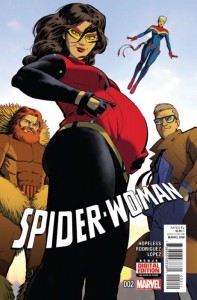 the hands of the people who’d appreciate it the most. Spider-Woman is the one of these three that’s already established — it was in the middle of a successful launch pre-Secret Wars, and the same creative team is on board here — but it’s ramped up its game even more, with the title character about to give birth and trapped in an alien hospital menaced by Skrulls (in a location whose last-page reveal is an effective cliffhanger). The Hopeless/Rodriguez team’s focus on Jessica as a relatable, heroic problem-solver and butt-kicker, along with the open, attractive art, make it a worthy addition to the group — and the book most likely to be appreciated by regular superhero fans, too.

A trio of Marvel relaunch second issues — Daredevil is re-settling into its urban-vigilante, Hell’s-Kitchen, closer-to-the-TV-show mode, with a new sidekick and 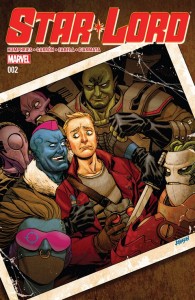 a Batman-like gangleader to battle, plus the inevitable ninjas and witness-protection-plot lawyer stuff. It’s fine, but such a throwback to the ’90s that fans of the Waid/Samnee volumes will be disappointed. If they leave, will it be able to attract enough Netflix viewers to survive? Stay tuned…. Star-Lord, meanwhile, continues its character’s origin story, with its 18-year-old version of Peter Quill having sort-of-accidentally hijacked a captured alien spaceship and now finding himself (a) stranded in space and (b) 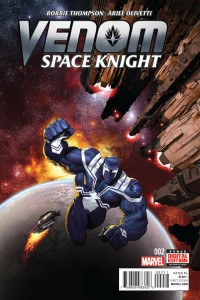 discovered by the space-pirate Yondu we’re familiar with from the Guardians movie. This second issue isn’t burdened with the set-up necessities of the first, so it’s free to add a lot more action, as Quill outwits the pirates enough to finagle an apprenticeship. Venom: Space Knight is taking a similar cosmic tack, with the Flash Thompson version of the symbiote now an “agent of the cosmos,” flying around the universe and righting wrongs; the big attraction here is the opportunity that gives artist Olivetti to do cool galactic backgrounds and craft cool Richard Corben-like aliens; this is definitely one of the best-looking books this week. 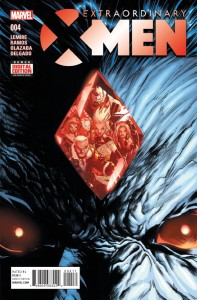 The other Marvel books for the week: Angela goes meta, name-checking former writer Kieron Gillen through one of his characters, Leah of Hel (who apparently knows she’s in a comic), while in the over-plot the title angel/Asgardian keeps kicking underworld butt and justifying her cover subheading. Extraordinary X-Men is finally accelerating its storyline now that the team (especially the two most reluctant members, Young Jean Grey and Old Wolverine) is together, albeit battling demons from their new stronghold in Limbo; 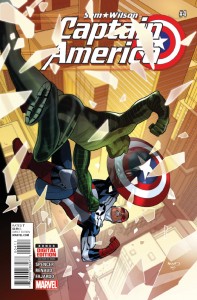 Lemire’s pretty good at shuffling all the moving pieces around, although it’s the Ramos art, a little less caricatured than usual, that’s the main attraction.  Amazing Spider-Man is dependable as ever, although older readers, used to perennial loser Peter Parker the Daily Bugle photog, may not recognize the Tony Stark-like inventor/worldwide-company CEO on display here.  Captain America has settled into a lightly-satirical tone that’s heavy on callbacks to Cap’s past, including Sam, like Steve Rogers before him, now a werewolf, 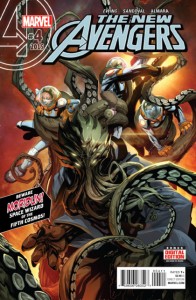 and battling the Serpent Society from way back in Steve Englehart’s time (although they’ve been updated to a corporate raider group for modern readers, giving them a more relatable set of criminal goals), while New Avengers, like Extraordinary X-Men, is finally starting to gel, with its Hulkling and Wiccan characters bringing in some old Young Avengers subplots and the rest of the cast interacting more easily (although Squirrel Girl is, so far, still woefully underutilized and overcaricatured); this is the first issue where all of the plot plates seem to be spinning steadily, enough that a new reader would be intrigued and encouraged enough to come back. 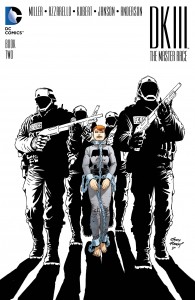 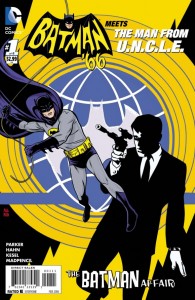 Not unusually, most of the DC books that interested me this week were Bat-related: DK III continues to be OK, with the Kubert art suitably widescreen, good at chase 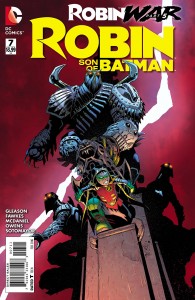 scenes and splash pages and the “uh-oh” chill caused when we find out the significance of the book’s “Master Race” title; eight issues still seems like a lot, but after these first two there certainly seems to be enough plot left to sustain the other six, and if Azzarello doesn’t quite match Miller’s inspired lunacy he manages to come pretty close. Batman ’66 Meets The Man From U.N.C.L.E. is pretty much just what you think it is, although in this issue they never actually meet — their stories run on parallel tracks, presumably to come together sometime in the next installment. The art is 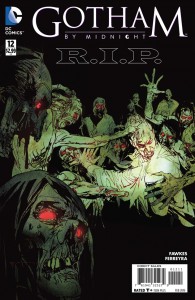 just so-so, especially with the U.N.C.L.E. cast, who look nothing like their ’60s TV selves — although maybe it’s just that I’m spoiled from last week’s finale of the regular Batman ’66 series, with its spot-on Michael Allred art. Robin, Son of Batman is the penultimate chapter of the “Robin Wars” crossover (with Robin Wars #2 set to bookend it next week); you’ll either want this because you’ve been reading the other chapters or you won’t, so any other comments from me wouldn’t make much difference.  Gotham by Midnight ends its run with a, literally, huge battle for 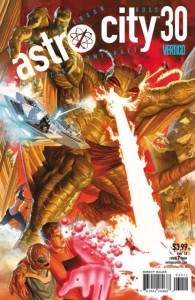 the soul of Gotham City — and, not incidentally, Jim Corrigan.  This was a quirky, offbeat little horror series that got cancelled too soon, but at least it got to finish its story fully, and generate two trade collections; if they do well enough, maybe we’ll get to see this group of characters again.  That leaves Astro City, the non-Bat book; this issue, set on an alien planet, involves one of Busiek’s patented small-guy POV plots, wherein a minor player, an alien kid, is our narrator and witness to an Astro City-fied version of a Fantastic Four vs. the Skrulls battle; it’s just as clever and solidly-constructed as all the other issues of this long-running series. 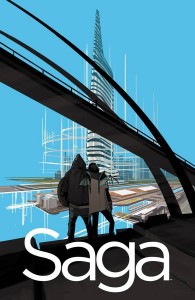 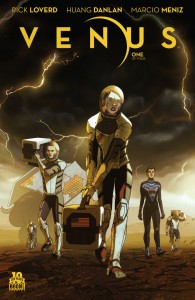 The indy books offer many of the best-told stories; Saga is grand space opera told in small human 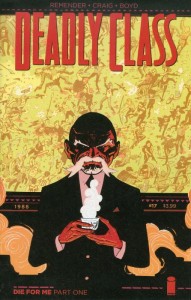 gestures, with rare but determinedly R-rated violence and sex; if you’ve never tried it, this issue’s not a bad introduction, and if you like it there are a bunch of trade collections that will let you experience the story from the beginning.  Venus is smaller-scale sf, a mini-series about an expedition to the title planet gone wrong, and has an appealingly-Heinleinesque heroine whose determined problem-solving drives the story. Deadly Class is about a murderous final exam at a teen school 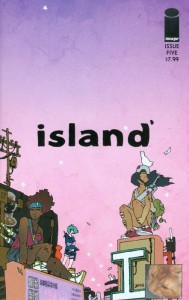 for assassins; it’s another good sampler issue, with a couple of trades awaiting for those struck by the book’s Hunter-S.-Thompson-playing-Holden-Caulfield charms. Island is Brandon Graham’s high-end, high-talent anthology book; for $7.99, you get: 28 stylishly-designed pages from Matt Sheean and Malachi Ward, about a corporate head who’s apparently overdosed on Ayn Rand and decided to separate the doers from the takers; 23 pages of Simon Roy (artist on the Graham-written Prophet) that looks like an early-’80s Heavy

Metal Moebius strip; 19 pages of Farel Dalrymple’s sequel to pop gun war, about a private detective, which for some reason made me think of Alan Moore and Steve Parkhouse’s Bojeffries Saga; and a striking cover by Amy Clare that looks like a cross between Graham and Peter Max, and ought to be wallpaper or a screensaver or something. Nameless is the last issue of this Grant 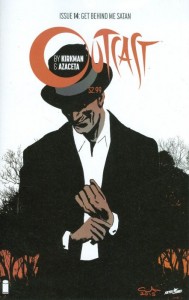 Morrison-written cosmic-horror book, with a confusing ending that’s either setting up a next volume, or would make sense if I just went back and read all the other issues in the series closely (being lazy, I prefer to argue that it’s actually an alternate-universe, secretly-coded version of the long-awaited Seaguy Volume Three…). Outcast is Robert Kirkman’s exorcism/demon possession story, a little over a year old and already filming its first TV season; its quietly-creepy tone, beleaguered hero and carefully-calibrated world-building make it work.

With 40 years of experience in comic reading, collecting and reviewing, English Professor Phil Mateer has an encyclopedic mind for comics. Feel free to ask Phil about storylines, characters, artists or for that matter, any comic book trivia. He will post your questions and answers on the AABC blog. His knowledge is unparalleled! He is also our warehouse manager, so if you are looking for that hard to find comic book, ask Phil!
View all posts by Phil →
This entry was posted in New Comics, Reviews and tagged Angela, Astro City, Avengers, Batman, Captain America, Daredevil, Deadly Class, DK III, Hellcat, Island, Moon Girl and Devil Dinosaur, Nameless, Outcast, Robin, Saga, Spider-man, Spider-Woman, Star-Lord, Venom, Venus, X-men. Bookmark the permalink.