There were only six Secret Wars tie-ins this week (and, even more encouragingly, five were conclusions), but instead of starting with them let’s look at another genre: a batch of quirky, smart kids’ comics: 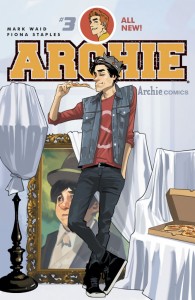 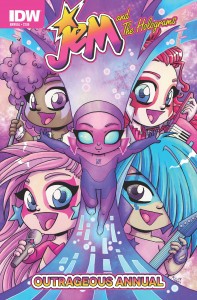 Archie’s the oldest of the characters here, with his 75th anniversary in sight, but Archie #3 is not your father’s bigfoot Riverdale redhead; instead, Mark Waid and the mighty Fiona Staples (whose renditions are somehow more realistic but still immediately recognizable, from Andrews himself all the way to the cafeteria lunch lady) have dragged him into the 21st century, starting over with the arrival of Veronica Lodge to town (she’s a reality-TV star, courtesy of her zillionnaire father) and building from there. Fans who grew up with the Dan Decarlo (or even Dan 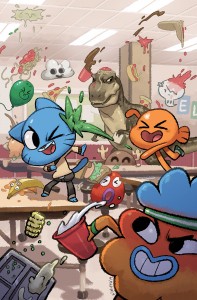 Parent) versions of the cast may be taken aback, but younger readers won’t care — they haven’t been reading this comic anyway, which is precisely the point — and everyone should find something to like in this relaunch.  Jem and the Holograms aren’t as old, of course (although they’re still about to enter their fourth decade), and their own relaunch has been fizzy soap-opera pop fun, written and drawn by Kelly Thompson and Sophie Campbell with a sleek sense of fashion and design.  This annual offers a breather from the ongoing story, utilizing a bunch of guest artists through the old fantasy-dreams-of-each-character trick, and it’s a nifty showcase of new talent, with episodes by Rebekah Isaacs (from Buffy the Vampire Slayer), Agnes Grabowski and Amy Mebberson (both of whom have worked on 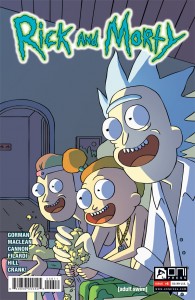 the surprise hit My Little Pony), Ariel Jovellanos, and Jen Bartel; all have unique styles, ranging from chibi to realistic, and all are worth reading.  The other three titles here all feature modern animation creations:  The Amazing World of Gumball, like Jem, is a larger-sized annual with six different short stories and a number of pin-ups paying tribute to the offbeat Cartoon Network series, known for its surreal, multi-styled approach to classic family-life and middle-school sitcom plots; creators include Fernanda Jaber and Fellipe Martins, Zack Giallongo, Philip Murphy, Nneka Myers, and Cohen Edenfield and Kate Leth, and they all do a good job or reproducing the series’s combination of the weird and the familiar.  Rick and Morty is an adaptation of the Adult Swim series that started life as a parody of Back to the Future and, courtesy of its co-creator, Community‘s Dan Harmon, morphed into a tale of an elderly alcoholic scientist who lives with his grandkids and takes 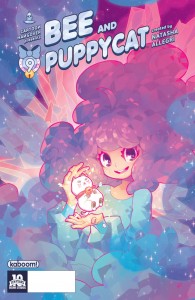 them on often-ill-advised adventures across space, time and various alternate dimensions. This is the least “kid” of the comics here (because, you know, “adult swim”), and its main characters don’t show up until the last page in this issue, but the explanation for that turns out to be just as offbeat and dream-logical as the series itself.  Finally, Bee and Puppycat is based on the most up-to-date cartoon of the lot — it appears on the Cartoon Hangover YouTube channel — about an unemployed woman who finds a talking feline/canine hybrid (so “puppycat”) that helps her get various one-shot jobs on different planets; like many of the concepts here, its dream-logic, fairy-tale tone and simple, direct approach make it both appealing and a little unsettling, while its adorable manga-ish style seals the deal. 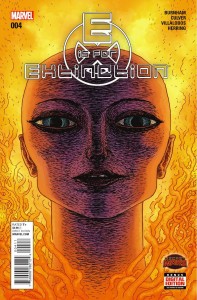 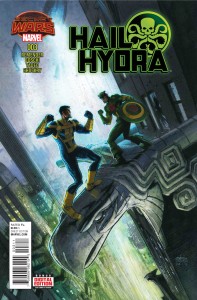 …and now for the Secret Wars comics: E Is for Extinction has grown on me with each issue, especially thanks to Villalobos’s bold faux-primitive art, which manages to pay tribute to Frank Quitely’s original New X-Men designs for these characters without ever copying or merely parodying them; it’s also helped by the clever, often-humorous script, 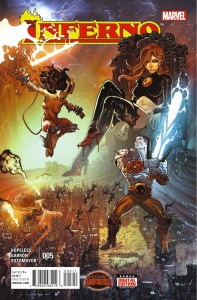 which makes full use of the alternate-history free pass (i.e., you can do whatever you want with these characters, because they aren’t “real”) to deliver an ending both bloody and optimistic, and establish itself as one of the best of all these mini-series.  Ghost Racers manages a decent conclusion, too, with a final double-page splash of all its flaming characters that’s worth the wait, although your attitude toward the story here depends on how much you liked the most recent relaunch of these characters.  Similarly, Hail Hydra

depends strongly on the Rick Remender volume of Captain America that concluded just before the Sam Wilson version, with Ian Rogers/Nomad trying to overthrow a Battleworld sector ruled by the title criminal organization and Arnim Zola;  anyone who liked that former version should like this latter one too.  Inferno, like E Is for Extinction, gets by on a sense of humor (a useful trait when most of your X-characters are dead either before the story opens, or by the end) and the readers’ fondness for the Madelyne Pryor/Illyana-as-

Darkchild X-era, while X-Men ’92 cultivates a similar light touch amidst destruction, but focuses on the year of its title, for both the X-Men comic and the animated series, and a cast that centers on Gambit, Rogue, Wolverine and Jubilee; both books manage some success at offering their characters (the ones that are left, anyway) an upbeat, satisfying conclusion.  That leaves M.O.D.O.K.: Assassin, which is both the bloodiest and the funniest comic of the lot, with its love-smitten, macrocephalic, gleefully-homicidal narrator also receiving, if not quite the ending he wants, one that at least leaves him as happy as a sociopath can be. 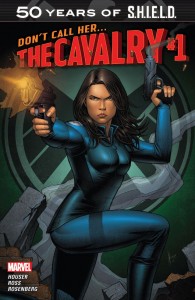 Two other Marvel books (although, if you’re getting tired of not enough non-Secret Wars material, just wait until next week, when all the relaunches start to debut…), with The Cavalry being another S.H.I.E.L.D. spotlight book, this one focusing on Melinda May, the TV series character played by Ming-Na Wen, who has to shepherd a group of new recruits

through a training session that, inevitably, turns more
dangerous than expected; both its story and art are competent enough, but rarely rise above that. Not so for Captain America: White, at least if you’re a fan of Tim Sales’s distinctive art, equal parts Golden Age throwback and modern-design oriented. Jeph Loeb plays to his old partner’s strengths by setting this whole issue as a WWII flashback, with Cap and Bucky teaming up with Nick Fury and his Howling Commandoes, and the result is an easily-likeable read, one that would seem to go by too quickly except that the reader keeps stopping to linger on that nice-looking art. 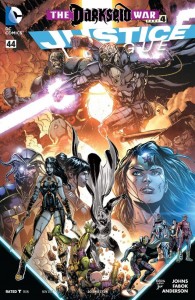 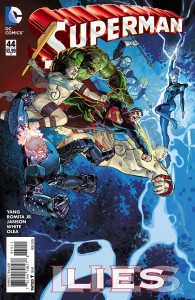 A handful of DC books, but they’re all heavy hitters: Justice League continues “The Darkseid War,” a typical Johns multi-episode widescreen spectacle with Batman in the Mobius chair, Lex Luthor and Negative Superman on Apokalips, the origin of the anti-matter universe (and the anti-Monitor), and a last page that, yes, is cool, but won’t last out the decade (or, knowing Johns, 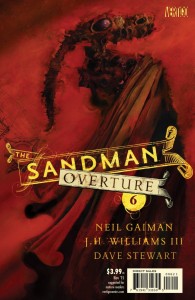 could be revealed as a fake next issue). Superman has Gene Luen Yang getting very good mileage out of the depowered-Superman plot, with a bunch of bad guys led by Livewire confronting the Man of Steel and holding comic relief Steve Lombard hostage, and of course Romita Jr. and Janson draw it irresistibly.  Sandman: Overture is the conclusion of Gaiman’s prequel to his classic story cycle, dovetailing neatly into its first episode, with J.H. Williams III’s versatile art and layout making it just a beautiful comic to hold in your hands (a pleasure that the inevitably-long-selling trade collection won’t quite be able to supply). 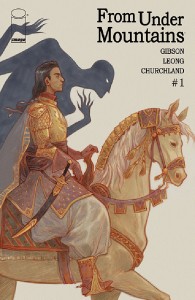 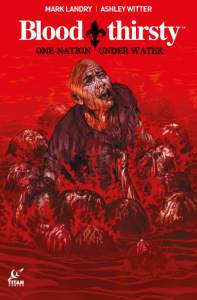 A quartet of indy books — From Under Mountains is an Image debut, but instead of the regular sf or noir it’s high fantasy, set in a vaguely-medieval Middle-Eastern country where magic works; it’s got an impressive sense of world-building, although maybe too many moving parts, and a conclusion that would work well in a trade collection but might not offer some readers 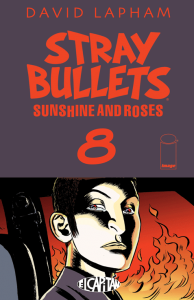 enough reason to come back as a newstand-comic first issue — except that Sloane Leong’s art, a little like Brandon Graham’s in its blunt simplicity and confident style, is enough to tip the balance.  Blood Thirsty is about a just-post-Katrina New Orleans facing a bunch of slit throats and blood sacrifices that may or may not be the work of supernatural forces or vampires; creator Landry talks in the introductory material about how much he wants it to be a searing indictment of greedy politicians and businessmen and a corrupt government, but that seems like a lot of weight for what’s, at base, a pulpy movie screenplay — he’d be better off to just go with the 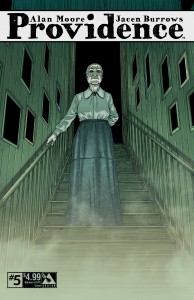 vampires, gleefully.  Exhibit A: David Lapham, who’s been delivering exactly that kind of cheerful noir  for a couple of decades in Stray Bullets, and developed an impressive body of work around it. Then, as we get into October and Hallowe’en approaches, there’s Providence, the latest of Alan Moore’s C’Thulhu pastiches, this one involving a pre-fiction-writing Lovecraft himself, exploring the creepy New England landscape that would inspire his tales (it acts, of course, as though everything in them was based on real incidents, with Moore’s typically-obsessive research supplying all kinds of small background details and Easter eggs to keep annotators busy); this issue doesn’t have the aggressive back-country dread of the previous one, but retains the paranoia, and still gets in a couple of disturbing images.

With 40 years of experience in comic reading, collecting and reviewing, English Professor Phil Mateer has an encyclopedic mind for comics. Feel free to ask Phil about storylines, characters, artists or for that matter, any comic book trivia. He will post your questions and answers on the AABC blog. His knowledge is unparalleled! He is also our warehouse manager, so if you are looking for that hard to find comic book, ask Phil!
View all posts by Phil →
This entry was posted in New Comics, Reviews and tagged Archie, Bee and Puppycat, Blood Thirsty, Captain America, From Under Mountains, Gumball, Jem and the Holograms, Justice League, M.O.D.O.K. Assassin, Providence, Rick and Morty, S.H.I.E.L.D., Sandman, Secret Wars, Stray Bullets, Superman, X-men. Bookmark the permalink.