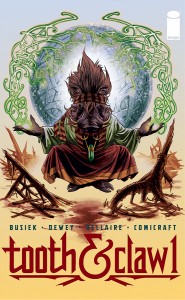 Busiek’s known for his superhero stuff, but he’s very good at sf/fantasy, too — his Arrowsmith, about World War I being fought on an alternate earth where magic works, was worthy of someone like Fritz Leiber or Poul Anderson, and his Shockrockets was a Heinleinien high-tech romp. In this new series, he’s going for anthropomorphic high fantasy: on a world of intelligent animals, magic is dying, and their attempts to fix things have terrible consequences. Dewey has a lush, painterly style and a knack for structure and architecture that are a perfect fit for the vast world-building going on here; his wizard warthogs and owls, loyal dogs, native buffalo and other creatures are wonderful to look at, and his splash pages are a marvel. Best of all, for only $2.99 this first issue offers 45 pages of that full-color art, plus Busiek’s dense, skillful story; everybody run out and buy lots of copies, so it continues for a deservedly-long run. 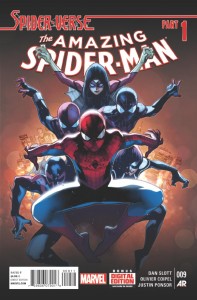 Quietly, Marvel’s been killing it with Spider-Man lately; the two-year Superior Spider-Man arc was a disaster waiting to happen that, thanks to Slot, Gage and some solid art by Giuseppe Camuncoli, turned out to be a taut, character-driven success. That built up so much fan goodwill that the relaunch of Amazing was, by some counts, the best-selling comic this year. Now, the creative teams have spent the last few months building up to “Spider-Verse,” a crossover teaming all the alternate/elseworlds versions of the character — another potentially-bad idea (Crisis on Infinite Spider-Men?) that’s, so far, been well-

executed and fun. Cannily, Marvel started with a couple of “extra” issues of Superior Spider-Man, then an “Edge of Spider-Verse” mini-series with each issue spotlighting one of the alternate versions — the ’30s pulp hero from Spider-Man: Noir, a variation where Gwen Stacy got bit by the spider instead of Peter, etc. — and finally a back-up in the last two issues of the flagship title. With Amazing Spider-Man #9, the main story finally begins: Morlun, the unstoppable energy vampire, turns out to have been part of a family of spider-avatar-hunters, and they’ve been traveling through the multiverse killing Spider-Men; seeing safety in numbers, some of the alternates have started to gather others, and now they’ve arrived on “our” Marvel earth to collect Peter, and we’re off on a six-issue epic. So far, so good: Marvel does a good job of labeling all the different versions (and trying to identify where they’ve appeared is an intriguing game for continuity buffs), while the bad guys are suitably evil. Meanwhile,  Team-Up offers two stories mixing and matching the alternates: the first has the older, outlaw version who appeared in one of J. Michael Straczynski’s stories, plus a Ben Reilly version and, of all things, Peter Porker, the bigfoot cartoon version that Marvel published under its kids imprint in the ’80s as The Spectacular Spider-Ham; the second story has the ’30s pulp one and a six-armed version harking back to Amazing Spider-Man #100-102. Do you need to know all of that to read the story? Nope, but the care with which it’s all been put together is an encouraging sign that the reader’s in good hands. Add in that the second story is by fondly-remembered ’80s Spidey creators Stern and McLeod (“The Kid Who Collects Spider-Man”), and this is the rare crossover tie-in that’s worth reading. 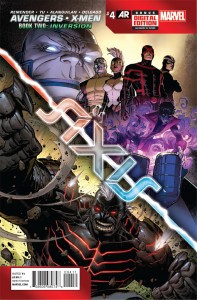 The other big ongoing crossover: in the first three issues, the Avengers and X-Men combined to defeat the Red Skull… except that, now, everyone’s acting strangely, with the heroes becoming more angry and amoral and the villains feeling pangs of altruism, and you don’t have to be hit over the head with a stick to know that, hey, there are six issues left, and maybe things aren’t quite as settled as they seem (to Marvel’s credit, they’re pretty good about not hitting us in the head with that stick, with Remender’s script leaving the changes, and their cause, largely unremarked-upon). Coipel’s not a bad choice for this kind of thing: like, say, Mike Deodato, his characters have a real-world heft to them, but he’s good at the classic, more cartoony superhero poses and action shots too. The result’s a smooth, professional, easily-entertaining story. 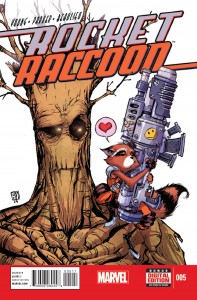 A one-off tale, as Rocket and Groot entertain a group of alien Cub Scouts around a campfire; most of the issue is the story Groot narrates, as only he can. Young does the framing sequences, while Parker gives him a breather by covering the art on Groot’s contribution; the result is a cute, clever little storytelling puzzle, one that parents reading the book to younger readers (or kids reading the book aloud themselves) should find particularly fun. 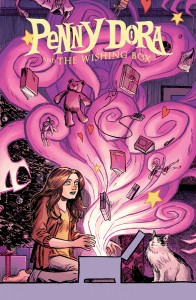 This is, quite literally, a kids’ book: the writer is basing it on a short story his then-eight-year-old daughter composed when she was in third grade; as the title says, it’s about a young girl who gets a magical box that grants wishes. Thankfully, it’s not as horrible a comic as the setup and circumstances might imply; Stock makes it charming, using the innocence of its original writer to good effect (no “Monkey’s Paw” horror twists here, at least so far…), while Grace, best known for his art on the much more adult Burn The Orphanage, reveals a knack for kid-friendly, open-hearted, reality-grounded fantasy. This is another comic that younger kids should enjoy, but it’s good-looking enough to sustain their parents’ interest, too. 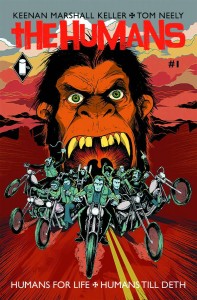 This story of an outlaw motorcycle gang on an earth populated with civilized apes instead of humans has a very underground feel, from the ’60s/rebel setting (complete with an X-rated scene or two) to the imaginative but slightly-stiff art, to the high-concept, but not very thought-out, ape thing (it’s like they said “Hey, let’s do a motorcycle-outlaw book! But with apes!” and then wrote exactly the same story as they would have with humans). All of this gives the book a loose, DIY feel that’s actually kind of fun; with 24 full-color pages for $2.99, it’s not a bad impulse buy in an otherwise-slow week. 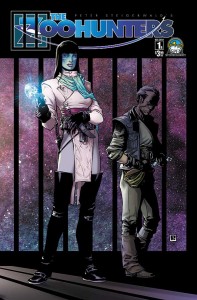 A 14-year-old boy whose mother has just died ends up in the custody of his father, a big-game hunter — except that this is a science-fiction story, so the father’s a xenobiologist, hunting down exotic, high-end prey for various collectors and other agencies on far-flung alien planets. A lot of this first issue is set-up, but Steigerwald has an effective painterly style, and a nice technique of using a lot of smaller panels to show time passing cinematically, and then switching to widescreen splashes to show action or spotlight emotion; readers end up caring about the central character, and that should be enough to bring them back as the real story revs up in later issues. 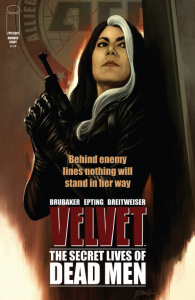 You already know the drill about this book, right? Brubaker’s got a ’60s superspy vibe going, with a very competent and resourceful female lead who’s been framed for an agency murder, and now is trying to prove her innocence while on the run. Lots of high-octane action, with Epting’s solid, hyper-realistic art and Brubaker’s tight plotting scooting things along, making this feel like a movie thriller unfolding in pamphlet form. 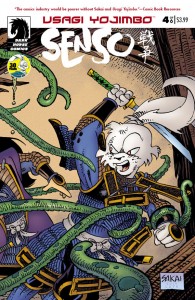 This transplant of War of the Worlds to Sakai’s funny-animal feudal Japan continues; since it’s an “imaginary” story set 20 years in the comic’s future, no one is safe, as familiar characters get zapped by the Martians and our heroic crew learns how to fight back and take advantage of their weaknesses, all while the Red Planet’s rocketships keep dropping on their heads. Wild, widescreen action rendered in Sakai’s precise, generous cartoony style makes this a fizzy, fun adventure comic. 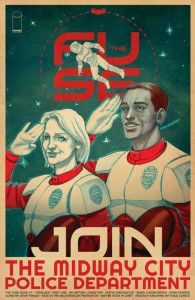 This is one of a group of smart, hard-science-fiction comics on the stands right now; it’s basically CSI: In Space, about a massive orbiting space colony (the “fuse” of the title, because it’s shaped like one), and two sometimes-bickering detectives (the older, jaded one is an albino Russian woman, while the inexperienced rookie is an African-German with a mysterious secret or two in his past) who try to solve murders up there. This issue, the first in a new “season,” finds them investigating the death of a woman found floating in space, who was part of a group of illegal outside-the-station space racers. All of this is very well thought out and zips right along; you could easily see it as a quirky cult TV show on some smaller cable channel (although the infinite special-effects budget provided by comics makes it better in print form).

With 40 years of experience in comic reading, collecting and reviewing, English Professor Phil Mateer has an encyclopedic mind for comics. Feel free to ask Phil about storylines, characters, artists or for that matter, any comic book trivia. He will post your questions and answers on the AABC blog. His knowledge is unparalleled! He is also our warehouse manager, so if you are looking for that hard to find comic book, ask Phil!
View all posts by Phil →
This entry was posted in New Comics, Reviews and tagged Amazing Spider-man, Axis, Penny Dora, Rocket Raccoon, The Fuse, The Humans, Tooth and Claw, Usago Yojimbo, Velvet, Zoohunters. Bookmark the permalink.