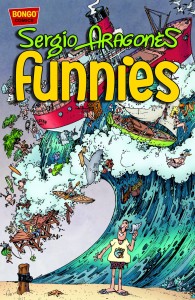 Aragones had some back problems earlier this year, and this book stopped coming out, but they’ve been fixed and he’s returned, and that’s welcome news: he’s one of our greatest living cartoonists. People who think of him only as the guy who does the marginal gags in Mad might be surprised at just how good a storyteller he is, but a comic like this lets him stretch out and show his versatility: there’s a memoir about getting Mad editor William Gaines a present, a horror story with a neat twist, a “war” story with another twist, and a couple of elaborate puzzle pages, all done in Aragones’s wonderful, deceptively-simple style, without a single line wasted or out of place. For another look at his work, check out Mark Evanier’s essential blog, where he writes about (and links to) an enormous fold-out poster Sergio did for the new book Inside Mad, which, in one obsessively-detailed panel, manages to reference the entire 61-year history of that magazine. 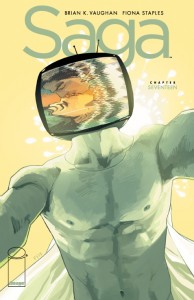 Time magazine’s website did a list of the top ten comics/graphic novels of the year, and Saga came in at #3 (Sex Criminals was #1, a judgment I found both surprising and exactly right). This issue, which finally moves past the cliffhanger from a couple of months ago (everything since then has been flashbacks), shows why it’s gotten so much praise: the action twists back and forth, but always logically, as bits of character and plot from previous issues combine to hurtle it to an inevitable, poignant and shocking death (delivered by a character we’ve grown sympathetic to; one of the book’s strengths is how everyone, no matter how alien, has recognizable motives and at least some good traits — no one’s a villain in their own mind), which comes in one of the series’s patented WTF? panels. Staples, of course, absolutely nails it, as her graceful and precise art does to every demand that Vaughan’s script places on it. 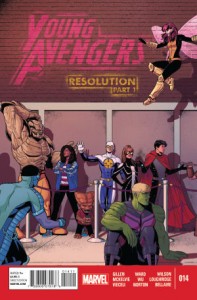 I just got done praising this book last week, so I’ll keep it short here — this is the first of the two-part “Afterparty,” where everyone’s relationships and character get some spotlight and resolution during a New Year’s Eve bash, a dance party much like the one in Gillen and McKelvie’s earlier (and amazing) collaboration, Phonogram: The Singles Club. Different teams of artists take five-page shifts: besides the McKelvie beginning, there are segments by Emma Vieceli and Lee Loughridge (on Wiccan and Hulkling), Christian Ward (on a sort-of origin of Miss America), and Annie Wu and Jordie Bellaire (wrapping up the issue with the Kate Bishop Hawkeye, in my favorite sequence; you know a character’s got possibilities when she’s featured in two of the best books of the year, here and in the Matt Fraction David Aja Hawkeye). 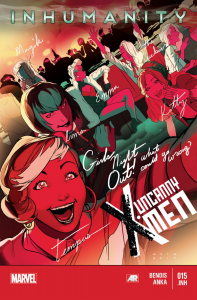 The girls at the hidden Scott Summers mutant school, tired of being without decent clothes, toiletries or makeup, talk their teachers — Kitty, Magik and Emma Frost — into a shopping trip, fueled by the wads of cash Emma has lying around. This is the kind of day-in-the-life bit that the Claremont X-books used to do better than anyone (and the story here has one or two callbacks to the Warren Ellis Excalibur where he did something similar, letting that book’s team spend an evening at a Scottish pub), and Bendis, with his knack for small talk and small character reveals, is quite good at it here. Of course, the trip gets interrupted by one of those new-Inhumans cocoons and A.I.M. (hence the “INH” designation after the issue number), and gets more superhero-y again, but until then it’s a nice reminder of how good writers and artists can make us care about these people when they’re done right. 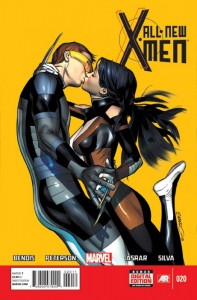 Another Bendis X-book, wherein X-23 meets the younger versions of the X-Men. Perfectly readable, but not as good as Uncanny, because (a) the cover scene is a bait-and-switch, with nothing even close to it happening in the book, and (b) it ends with a seemingly-low-powered character raising his arms and blasting everyone unconscious in a blaze of white light — the exact same resolution, albeit with different characters, as in that former comic. Geez, Brian Michael, if you’re going to recycle the same plot, at least don’t do it in books that come out the same week…. 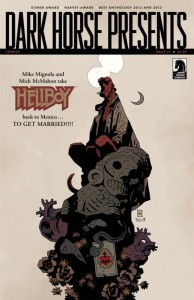 We’re in a decent market for comics right now, but 31 issues for a $7.99 book is still a formidable achievement. As always, DHP does it with quality creators: here, the main attraction is the first chapter of a Mike Mignola/Mick McMahon Hellboy tale (with Mignola providing the cool cover art); additional stories include a Matt Kindt Mind Mgmt episode, chapters of the  Mike Baron/Steve Rude Nexus and Caitlin Kiernan/Steve Lieber Alabaster serials, and six other contributions from other writers and artists: more than enough to be worth the money to most any fans, whatever their tastes. 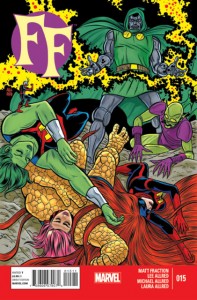 Both of these books have just one issue to go, and they’re converging as they race to their respective conclusions, with the prime villain being, no surprise, Dr. Doom (assisted by Kang and Annihilus, among others). Fraction’s dropping out as writer before the end has hurt Fantastic Four more than FF (since the Allred family — Lee is 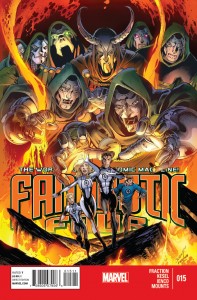 Michael’s brother, and wife Laura is the colorist — provides such an organic, imaginative spark to keep that title buzzing), and that former book, especially, after a promising beginning, is limping to the finish line. Not to worry, though — with another renumbering and new creative team on the horizon (James Robinson and Leonard Kirk on Fantastic Four #1 next year, with FF apparently dormant), the Mighty Marvel merry-go-round will start up once again…. 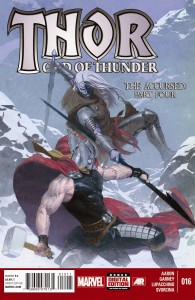 This is the fourth of a five-part tale involving the Thunder God and a D&D-like party of adventurers — an elf, a troll, a giant, etc. — trying to stop Malekith, this summer’s movie villain. Since it’s the penultimate episode, it ends with things looking bad for our crew — although whether Thor’s actually been outmaneuvered (and, in the process, acted like a huge butthead), or still has a trick or two up his sleeve, remains to be seen (and will affect whether this turns out to have been a good story). Aaron and Garney have been effective enough with the Tolkienesque atmosphere here, but it’s probably time to get the cast back to Midgard, and a few more down-to-earth stories, before the widescreen fantasy stuff gets too predictable. 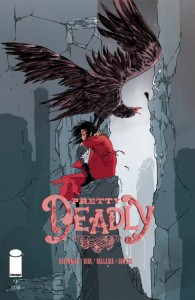 I don’t have a clear idea of what’s going on with the story here– it’s something like East of West, in that it’s using Western elements mixed with more mythological ones — but it’s only halfway through its five-issue sort-of-origin story, and I can tell that (a) it’s about a lone rider who’s the daughter of Death, (b) it’s definitely pretty, thanks to the intricate, skillful Rios art, (c) it’s got a confident, ageless fairy-tale voice, thanks to Deconnick, who seems to know exactly what she’s doing, and (d) it’s a lot of fun to read. 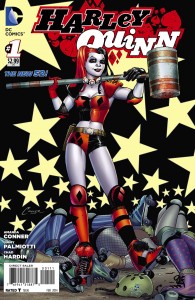 Eh… the trouble with the previous “0” issue, with its many artists and meta jokes, is that this one seems so much more pedestrian: Harley moves to Coney Island (where she’s inherited a house), meets the rest of her new cast and gets a new job in an… appropriate venue. Fine, and Harley fans won’t be too disappointed, but the art’s merely competent, there’s not much of the kind of Bugs Bunny/Deadpool madness that a book like this needs, and no single line is as funny as the prior issue’s “I’m Amanda Connor, bitches!” 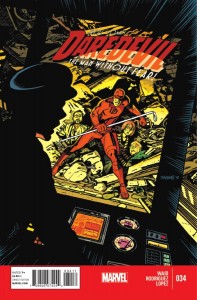 Lopez is Ok on the art here — it’s not his fault that his last name isn’t Martin, Rivera or Samnee — and the story manages some good bits with Matt’s DA friend, Kirsten; it’s also a small love letter to New York City. That’s ironic, since readers know that there are only two issues of the comic left, and then DD is moving across the country to California, with a digital story and then a new #1 issue in 2014 (although he’ll still be written by Waid, and drawn by Samnee, at least at first). 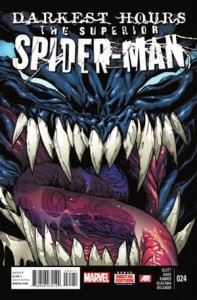 Bought it; read it; mildly entertained by it. I like the way all of Spidey-Ock’s arrogant (if well-intended) actions keep coming back to haunt him, and the way his personality makes him oblivious to this; I’m also happy to look at the Ramos art. Presumably, events will build over the next few months to a showdown with the various Goblins, a reboot and a return to the previous status quo; if part of the creative team’s intent with this story was to make us miss the “old” Peter, not take him for granted and look forward to his return, then mission accomplished.

With 40 years of experience in comic reading, collecting and reviewing, English Professor Phil Mateer has an encyclopedic mind for comics. Feel free to ask Phil about storylines, characters, artists or for that matter, any comic book trivia. He will post your questions and answers on the AABC blog. His knowledge is unparalleled! He is also our warehouse manager, so if you are looking for that hard to find comic book, ask Phil!
View all posts by Phil →
This entry was posted in New Comics, Reviews and tagged Daredevil, Dark Horse Presents, Fantastic Four, Harley Quinn, Pretty Deadly, Saga, Sergio Aragones Funnies, Superior Spider-Man, Thor, Uncanny x-men, Young Avengers. Bookmark the permalink.