As a special end-of-year feature, we’re reviewing every single comic published this week! (Of course, since it’s a holiday week, there were only eight books, but still….): 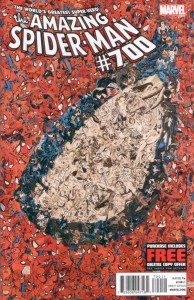 There’s also a 16-page “Spider Dreams” story by J. M. DeMatteis, Giuseppe Camuncoli and Sal Buscema (an art team that turns out better than you might think), and an 8-page “Date Night” story with Spider-Man and the Black Cat, written by Jen Van Meter and with very cute, painted art by Stephanie Buscema, plus a 7-page letter column (with answers by Stan Lee), and one of those all-700-covers  composites that takes up 7 pages. The lead feature is 48 pages, and Ramos’s fluid style makes the art — especially the fight scenes — flow well; he’s even able to pull off a scene in the afterlife that, in the hands of a lesser artist, would have been too syrupy to work.

So, how’s the story? While I’d rather not spoil it completely (although national news services and online discussion have pretty much let the octopus out of the bag on the major plot development), the stage is set for a “new” Peter Parker, with a very different personality. Not completely different, however — Slott’s made sure that there’s still a “great power/great responsibility” philosophy, and that the rebooted version is still a hero (although a more reluctant, less instinctual one than before), through a clever twist at the end. If I thought that this was a permanent change, I might be upset — but c’mon, people, we all know that this is a temporary development, and within a year or two the status quo will be restored; in the meantime, it’s an intriguing way to shake the dust off the character, and be able to explore just what makes someone a hero — and, since, that’s always what Spider-Man has been about, it’s as good a way to celebrate an anniversary issue — and year — as any.

This is the first full story with the “new” Spidey after Amazing #700; because it’s by Yost instead of Slott, the tone of the new character doesn’t seem quite “set” yet (a problem that I suspect is going to multiply as different writers, like Mark Waid over in next month’s Daredevil, use the new version of the character: just how noble/heroic/irritating/arrogant is he, anyway?), and we get five days of him figuring out his new life, making modifications to his costume, etc. While it’s perfectly competent, there’s nothing particularly special about the art or the story here, and AABC still had copies of these out at cover price on Friday, but they’ll be gone soon — they weren’t ordered nearly as much as Amazing #700, and are already going on eBay for over $10, so don’t say you weren’t warned. 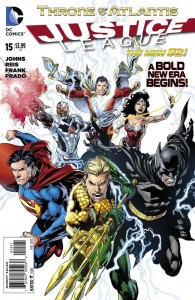 After a few issues of smaller stories, Johns starts another multi-parter, “Throne of Atlantis,” this time crossing over with Aquaman (if that wasn’t obvious from the title), and involving that undersea kingdom getting manipulated into declaring war on the surface world. Reis is a good choice for artist here; he and Prado handle the underwater scenes, the small character bits (Clark Kent and Wonder Woman having a quiet meal at a restaurant) and the big cinematic effects (a tidal wave interrupts the meal in a, heh, double-page splash) equally well. These bigger crossovers play to Johns’s strengths (although he’s still pressing the “everybody makes fun of Aquaman” button too much), and this is an effective beginning to the story. The Shazam backup, by Johns and Gary Frank, continues to look great and move slowly; this is chapter 8, and it’s only at the end that we get the first major character conflict. 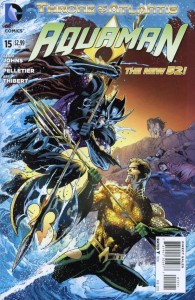 Part two of “Throne of Atlantis,” so read it after the Justice League issue — Boston, Gotham and Metropolis are all partly underwater, and Aquaman has to confront his brother, the ruler of Atlantis, and get him to back off before the rest of the League intervenes. Predictably (especially considering that this is only the second part of the story), things don’t go well. Good sales moves by both Marvel and DC in this very light week — if you’re only going to release two books, make them related, and make sure that readers have to get them both to get the full story. 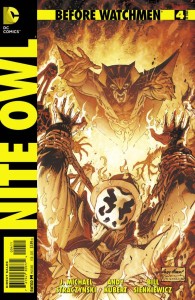 I haven’t been paying much attention to these BW books, except for the Amanda Connor and Darwyn Cooke ones (and I gave up on Minutemen, Cooke’s effort, after the first two issues), but this one was notable for its Kubert family art (father Joe was inking over son Andy’s pencils). Tragically, Joe died before the series was over, leaving Bill Sienkiewicz to finish (and, incidentally, meaning that the writer and inker of this book have the two hardest names to spell and pronounce in comics). Its teamup of Rorschach and Nite Owl looked great with the Kuberts drawing it, and still looks good now, but the story itself is slight, an expansion of a couple of panels of conversation in Watchman itself, and involved so many coincidences and silly twists that it hardly seems worth the effort. 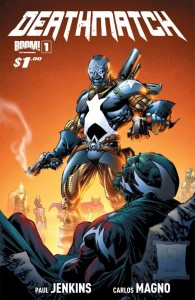 This new offering from Boom! is a Hunger Games riff, much like Avengers Arena; a number of super-powered characters have been mysteriously transported to… someplace… by aliens, and forced to fight in a series of gladiatorial to-the-death matches (hence the title). Jenkins is good at this kind of thing, and should be applauded for coming up with 32 brand-new characters, I suppose (and there’s some Elseworlds-type fun in picking out the influences — the Hulk clone over here; the Rorschach one over there), but yet another superhero universe? One where almost all of the characters are going to be dead by the end? Meh. Points to Boom!, though, for having the marketing savvy to release this during the light Christmas week, and for offering this first issue as a full-size comic for only a dollar. 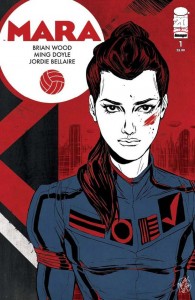 Another first issue, this one crossing some of the feel of Wood’s Demo (the seemingly-normal character who suddenly manifests powers, and what happens then), with an sf setting involving a future Earth that’s plagued by wars and obsessed with sports; it’s the lead character, a young woman who’s a volleyball superstar, whose world is suddenly ripped apart here. As with many first issues, this is mostly about setting up character and giving the reader background information on the setting (via one of those often-used newscast-feed running captions); the creators have done their job if readers are interested enough to come back for the next issue, when the real plot starts. 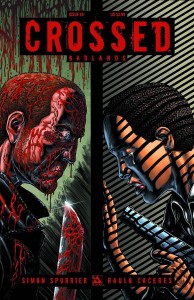 This zombie-apocalypse-with-a-twist book has been running for a couple of years now, with the usual emphasis on gore, sex and violence; it’s elevated from other books of its ilk because it’s attracted a better class of writer (probably thanks to its being originated by Garth Ennis). This conclusion to a two-part story is notable because Spurrier has also been contributing a long new story in weekly installments to the Crossed website — and because, as with the other decent writers, he knows that it’s not so much the crazed madmen of the title who are the point, but the similar dark urges and capacity for betrayal in the still-human protagonists.

With 40 years of experience in comic reading, collecting and reviewing, English Professor Phil Mateer has an encyclopedic mind for comics. Feel free to ask Phil about storylines, characters, artists or for that matter, any comic book trivia. He will post your questions and answers on the AABC blog. His knowledge is unparalleled! He is also our warehouse manager, so if you are looking for that hard to find comic book, ask Phil!
View all posts by Phil →
This entry was posted in New Comics, News and Events, Reviews and tagged Amazing Spider-Man #700, Aquaman, Deathmatch;, Justice League, Mara, Nite Owl. Bookmark the permalink.